Fox News has long served as the public relations arm of the Republican Party. Their purpose, as always, is to promote the GOP and the conservative agenda throughout their broadcast day. In pursuit of that mission they regularly feature Republican guests in the friendliest of environments. And whenever there is a conservative cause to promote (i.e. Tea Party, Palin movie, right-wing blog, anti-left messaging, etc.), Fox steps up to take the leading role.

Consistent with this mission, Friday night’s episode of Sean Hannity’s program on Fox News was a blatant infomercial promoting an anti-Obama movie by the people who brought us Citizens United. The crocumentary “The Hope and the Change” consumed the entire hour of Hannity’s program. 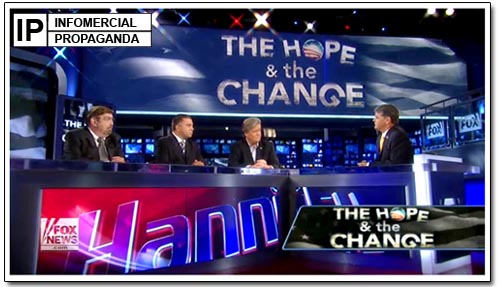 The primetime program featured lengthy clips from the film as well as interviews with the film’s creators, David Bossie and Steve Bannon. Bossie is the head of Citizens United, the organization that prompted the abhorrent Supreme Court decision that made it possible for individuals and corporations to donate unlimited sums of cash to political candidates and causes. Bannon is the director of the monumental flop, “Sarah Palin: Undefeated,” a movie that managed to fail miserably despite millions of dollars in free publicity courtesy of Fox News. Bannon went on to take the reins of Breitbart News after the sudden death of Andrew Breitbart, and he somehow succeeded in making the site even more idiotic.

Hannity opened the infomercial with the stark declaration that…

“I don’t say this lightly, but I mean every word of this. This is the most powerful documentary I’ve ever seen in my life.”

That’s quite a testimonial. Hannity didn’t reveal what other documentaries he’s seen, but it’s fair to guess that his second favorite would be “Triumph of the Will,” Hitler’s propaganda film directed by Nazi propagandist Leni Riefenstahl. Now that may seem like an unfair attempt to associate Hannity and the anti-Obama film with the Third Reich, but the film actually incorporates portions of Riefenstahl’s score, and Bossie openly admits to intentionally including the music for effect. When asked about his choice of music Bossie confessed that “There are no accidents in this film.” So the Hitler reference was deliberate on the part of the filmmakers.

Along with Bossie and Bannon, a key figure in the film’s production was Pat Caddell, the former democratic pollster who has become a fixture on Fox News whenever they need someone they can falsely identify as a Democrat who will mercilessly, and dishonestly, savage his former colleagues. Caddell’s role was to assemble a group of disenchanted Obama supporters who could be manipulated to bash the President’s reelection bid.

In fact, the whole focus of the film’s message was that there are some folks who voted for Obama in 2008 who don’t plan to vote for him again. That isn’t exactly an earth shattering revelation. Many people on both sides of the political spectrum change their minds. But the people featured in this film were particularly daft. They expressed their disappointment in the President because he didn’t fulfill their expectations of miraculous healings and the saving of souls. In their own words they seemed to believe that Obama could achieve the impossible, and when he didn’t they abandoned him. That is probably a tiny demographic in America and they are not likely to have a noticeable impact on the election.

By comparison, the Obama campaign just released a video of former Republicans who will be supporting the President in November. Their stories are far more representative of typical moderates who are surprised and appalled by the extremist leanings of the modern Republican Party.

Republicans just adopted a platform for the party’s convention that illustrates how far from the mainstream they have drifted. It includes an anti-abortion plank with no exceptions for rape, incest, or the life of the mother; an immigration plank that calls for “self-deportation;” a plank advocating a return to the gold standard; a provision denying women a role in combat; opposition to same-sex marriage; and support for turning Medicare into a voucher program that will cost seniors thousands of dollars more.

Those are real issues that will drive the voting decisions of rational moderates. The glassy-eyed sycophants plucked out of obscurity by the anti-Obama film crew will have zero effect on clear-thinking voters as they evaluate the agendas put forward by Obama and Romney. What may have an effect, however, are the millions of dollars the filmmakers have promised to spend on advertising their crocumentary. They can finance their campaign with funds acquired from the sort of Super PACs that their Supreme Court decision enabled.

What’s disturbing about this is that they freely admit that their purpose is not so much to promote the film, but to let their ads serve as disguised political messages aimed at disparaging the President and affecting the outcome of the election. The reason that they chose this month to release the film was so their advertising would appear during the campaign season and they could pretend that it was merely marketing for the movie. And I repeat, this is not a conspiracy theory, it is something they specifically admit to and boast about.

Of course, the filmmakers always have Fox News to fuel their hype. The GOP network is more than happy to donate as much time as necessary to promote the movie, just as they have done for prior projects. The Hannity show was just the beginning. The film will officially debut at the Republican National Convention Etch-a-Sketch next week, and there will surely be more segments devoted to the film on Fox News. And while they will help to boost the success of this commercial, for-profit hit piece, it is highly unlikely that Fox will give much time (if any) to the political communication above from the Obama campaign. That would, after all, be too much like actually reporting the news which, as we know, Fox doesn’t do.