A new report released by a right-wing organization is receiving a great deal of attention from the conservative media circus. The Government Accountability Institute’s report alleges that President Obama is unlawfully soliciting and receiving donations from foreign nationals. 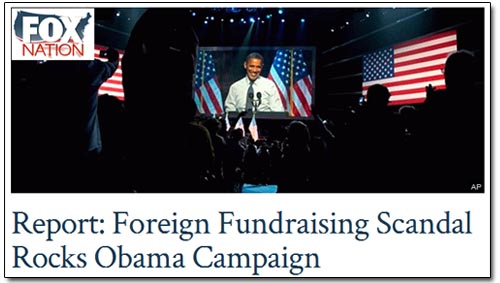 At Fox Nation the headline is a sensationalistic “Foreign Fundraising Scandal Rocks Obama Campaign.” But it appears that their idea of “rocking” is something like the Eagles on Valium. Others in the anti-Obama press posted stories blaring that “Obama bundler tied to Chinese government? (Hot Air);” “Is the Obama Campaign Being Financed by Foreign Donations? (Examiner);” “How Much of Obama’s $181 Million September Haul Was Illegal? (Breitbart);” “Corruption: Exposing Barack Obama’s Illegal Foreign Campaign (Townhall);” “Obama Campaign Receiving Illegal Donations from Foreigners (Media Research Center).” And of course, the kiddies at Fox & Friends chimed in with an interview of the study’s authors that began with Steve Doocy asserting that “the Obama campaign is breaking the law.”

There’s just one little problem with all of this frothing outrage. There isn’t any evidence that any of it is true. The study doesn’t cite a single example of a foreign donation to the Obama campaign. The authors admitted to Doocy that there is no such evidence. The study’s premise is based entirely on their discovery of the Obama.com domain, which is not owned by or affiliated with the campaign or the President. The domain is registered in Shanghai and redirects to the official Obama web site (BarackObama.com). Donations cannot be made at Obama.com.

So the whole scandal consists of a foreign registered web site that cannot receive donations and links to President Obama’s campaign web site, but offers no proof that any non-American citizen made a donation. SHOCKING!

What the articles reporting this study leave out is that its authors are rabid right-wingers with long histories of bashing Obama and Democrats. Stephen K. Bannon, the co-founder and Executive Chairman the Government Accountability Institute (GAI) is also the Executive Chairman of Breitbart News and the director of disreputable and unsuccessful films such as Sarah Palin’s “The Undefeated,” and the anti-Obama diatribe “The Hope and the Change.” Steve Doocy of Fox News has interviewed Bannon before in connection with his films, but today introduced him only as the co-founder of GAI. His co-author is Peter Schweizer, a research fellow at the conservative Hoover Institution and former aide to both George W. Bush and Sarah Palin.

The failure to disclose the true identity of the study’s authors is another example of the utter lack of ethics on the right. But the most brazen dishonesty is that Breitbart News ran this story in an article by Mike Flynn asserting as fact that Obama had taken illegal donations and stating that “details about Obama’s fundraising windfall and a new report this morning from the Government Accountability Institute (GAI) raise troubling questions.” But Flynn never disclosed that the GAI he referenced in his story is run by his boss, Stephen Bannon.

This is a common tactic on the right. They create a bunch of shell organizations that release versions of the same propaganda and then refer to each other for verification of the things they already said. Eventually they cast the net wider to include friendly media like Fox News and Rush Limbaugh, and the circle of disinformation keeps spinning their lies. Then they complain that their fake news items are ignored by legitimate media. I wonder why.