This weekend HBO is premiering its much anticipated adaptation of the book “Game Change,” the story of Sarah Palin’s selection to be John McCain’s running mate in 2008. The film stars Julianne Moore, Ed Harris, and Woody Harrelson, and has received glowing reviews from critics, although Palin defenders have trashed it despite never having seen it.

In a clumsy attempt at counter-programming, the Reelz cable channel has scheduled an airing of last year’s box office bomb, “The Undefeated” on the same day. The Undefeated is the painfully sycophantic Palin crocumentary that couldn’t make it through three weeks in movie theaters last year. In its opening weekend it made less than 1/10th of what “An Inconvenient Truth” made, despite plying on twice as many screens. In less than a month it was headed for the discount video bins at Wal-Mart. 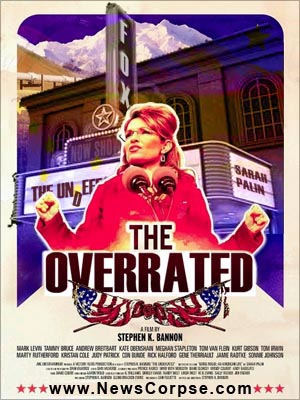 On Fox & Friends this morning, Steve Bannon, the producer of the Palin flop, was interviewed about its upcoming airing on cable. Bannon was introduced by Eric Bolling who dishonestly told Fox viewers that, “This is a follow up, right? This is the real Sarah Palin story.” Of course it isn’t a follow up; it isn’t new; and it isn’t real.

It is no wonder that the Foxies have to pretend that this is something new. They can hardly pitch it as the same old garbage that moviegoers so markedly rejected almost a year ago. And the box office failure occurred despite a massive effort by Fox News to promote it. But do they have to be so brazenly dishonest? At Fox Nation they continued the hype campaign with this headline: “New Documentary Takes Intimate Look at Sarah Palin.” Not only does that misrepresent the film as new, it makes it sound a little pornographic. I guess they think that’s the only way they can trick people into watching it.

The third week of release for Sarah Palin’s crockumentary, “The Undefeated,” saw its worst boxoffice performance yet. Dropping from 14 theaters last week to four this week, the film took in only $5,200 this weekend – a decline of 79%. Since its release, the million dollar production has earned a paltry $112,000 total.

Forget the press release extolling the success that sent the film to video after only two weeks in release. Never mind the ecstatic bragging by producers that the film was enjoying “overwhelming demand.” The UnDefeated flopped in a formidable fashion, despite the massive free publicity that Fox News gave the movie prior to, and during, its theatrical run. Here is a selection of the headlines from Fox that now seem pathetically quaint:

So the losing 2008 GOP vice-presidential candidate, who quit halfway through her single term as governor, and is currently garnering single digits near the bottom of most polls for the 2012 Republican presidential nomination, has now officially been defeated at the boxoffice. Apparently her loyal fans cannot be bothered to do more than reTweet her lame musings and skim through her incoherent Facebook posts. All the more reason I really hope for this:

Stephen Bannon, the writer/director of Sarah Palin’s The Undefeated, has announced his next documentary project: Custer’s Victory – The inspirational saga of a brave general whose tiny band of soldiers tossed King Tut’s tea into San Francisco Bay. But seriously…..

The Undefeated is having as difficult a time living up to its name as its subject does. After pretending the opening was a massive success, the film’s defenders tried to make excuses for its obvious failure by whining about how little promotion it had. To the contrary, it was promoted heavily to its target audience. It had a screening at the RightOnline Conference hosted by Andrew Breitbart. It’s official premiere was in Iowa with Sarah Palin in attendance. The Fox News television and Internet PR machine was hyping it non-stop.

Now, after its second weekend in theaters, the film has sunk to even more embarrassing lows. Despite promises that it would roll out nationally, it added only four new theaters. The total boxoffice for the weekend was just $24,000, a 63% decline from last weekend. And perhaps most emblematic of a cinematic fiasco, the producers just announced that the movie is going straight to video – after less than two weeks in theatrical release. The press release from the distributor is a hilarious feast of hallucinatory grandeur. It reads like an announcement of triumph:

“Victory Film Group and ARC Entertainment, the distributor of ‘The Undefeated,’ the film about Gov. Sarah Palin’s rise from obscurity to national prominence, jointly announced today that beginning on September 1st the film will be available to 75 million homes via Video on Demand and Pay-Per-View access through national and regional cable and satellite operators.”

Translation: Our movie sucked so bad in theaters that we’re desperately trying to salvage our investment and reputation by jumping immediately to television in the hopes that we can con some addled-brained Tea Baggers out of a few more bucks.

The press release went to say that “a ‘Special Edition’ DVD will contain additional new content and will only be sold in Walmart stores.” Now that’s an affirmation of achievement if there ever was one. The CEO of ARC Entertainment remarked that the company has been “inundated with requests from people wanting the film to be made available in their market.” Just not in their theaters. He continued by expressing how excited he is “about having this film made available to the entire country earlier than expected.” The producers of Harry Potter must be mortified that their movie will be stuck in cinemas for another six months and won’t be “available to the entire country” for a year or more.

These entertainment geniuses are attempting to argue that the empty theaters are a sign of “overwhelming demand” from the public who are just so darned anxious to see the picture in their own homes. Despite this hankering for the film, the producers assert that they will still have to embark on a multimillion dollar campaign to promote the TV offering. It’s a good thing that that’s a load of BS, because otherwise they would be losing even more money on this turkey.

This pathetic display of disinterest in the Palin crockumentary that was heralded as the true story of the half-term governor, and that would polish her image and reveal her greatness, cannot portend well for her presidential ambitions, if she really has any. If the people who would be her most ardent supporters won’t go to see her vanity bio-pic, then we shouldn’t expect voters to go out of their way either. America views Palin as a quitter, a loser, and a washed up reality star. At this point Khloe Kardashian would probably out-poll Palin.

This weekend moviegoers flocked to see the final episode of the Harry Potter series. However, observers from Fox News must have thought the throngs of film buffs were all there to see Sarah Palin’s “The Undefeated.” The Fox Nation reports that the movie opened strong and that the theaters were packed. That contrasts sharply with independent reports of empty theaters and weak box office. 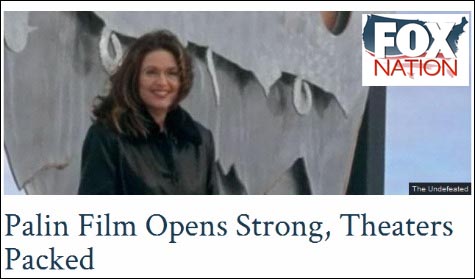 By any measure the movie was a bomb. It pulled in about $65,000 from the 10 theaters where it played. Let’s compare that to some other documentaries with limited screen openings:

The numbers for Undefeated need to be tempered by the fact that at least one screening was bought out in its entirety by the local Republican Party in a Dallas suburb. It is unknown at this time how often that occurred in other markets.

The logic that concludes that this film is successful is the same sort of logic that caused the filmmakers to name a movie about Sarah Palin “The Undefeated.” It’s delusional logic at best considering that Palin’s most recent campaign resulted in an embarrassing defeat, her cable reality show saw lower ratings each successive week, and her books sell fewer copies with each publication.

If this is the best the movie can do on its opening weekend, when most films do their best business, then they might as well roll up the red carpet and go home. It’s all down hill from here. But don’t be surprised if mesmerized Palin fans insist that, once again, she is undefeated.