I hate to be redundant, but Fox News is lying.

On this latest occasion they posted an article on their community web site, Fox Nation with the headline, “Obama Campaign Processed Donation From The Kremlin.” 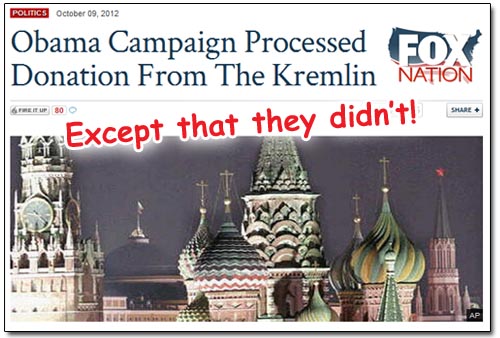 The charge stems from an attempt to make a phony online donation to President Obama’s campaign. The “donor” states that he put in fake information hoping to prove that Obama was taking foreign funds in violation of the law. That’s an allegation that was completely debunked here yesterday. Now, after extensive research I have been able to prove that this new allegation by Fox is totally false as well. That research consisted of reading the article to which they linked.

The article was on RedState and was written by RedState editor and CNN contributer, Erick Erickson. His article also featured a headline that was blatantly false: “I Donated to Barack Obama.” That was followed up by another post that said “The Obama Campaign Processed This Donation.” However, if you took the trouble to actually read the article you would have eventually come to this paragraph saying…

“Then this is where the anti-climactic end to my story comes. The donation ultimately did not go through after three days of being listed as “processing.” There was no explanation.”

That’s right. The payment was rejected. And without an explanation at that, as if one was needed. Erickson and Fox just outright lied in saying that the payment was processed. Erickson’s excuse for the dishonesty is a lame assertion that “The Obama campaign processed the donation. It was Bank of America that stopped it, not Team Obama.” But that only proves that he is stupendously ignorant about how online transactions occur. No online commerce site is capable of rejecting a payment on their own. It is always the bank or credit card company that does it. In this case it may have taken a couple of days, but the result was correct. And considering the volume of donations that Obama receives, there is nothing unusual about the timing.

Erickson set up a sting to catch the Obama campaign breaking the law and found out that the campaign was completely legal in every respect. So then he simply ignored the results of his own phony scheme and said that Obama was unlawfully processing payments anyway. That should tell you all you need to know about Erickson’s utter lack of integrity. And of course, the same goes for Fox for re posting Erickson’s lies.

2 thoughts on “Another Fox News Lie: Obama Did Not Take Money From The Kremlin”