Sick, disgusting, lowlife, right-wing scum. That’s the only fitting description for the miscreants who congregate on the Fox News community web site, Fox Nation. As I have previously documented, these hostile heathens have a bloodlust for their political adversaries that is perverted and antithetical to free democracies. They have fantasized about assassinating President Obama (and that’s not the only time). They have dreamed of seeing Nancy Pelosi get her skull bashed in. They celebrated Arlen Specter’s death. And now they cheer about Harry Reid being hurt in a car accident and lament that he survived. 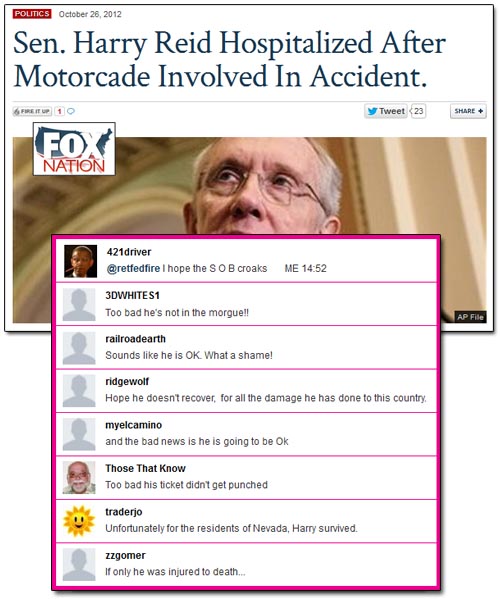 These cretins would turn the stomachs of decent Americans. Yet Fox News grants them a platform to spew their violent yearnings. And this isn’t an isolated incident as the links above demonstrate. This is the common behavior on Fox Nation and it is tolerated, even encouraged, by others in the community as well as by Fox News.

This is the nature of the modern conservative. Divisive, vulgar, and overtly hostile. And it is a nature that Fox News promotes on their web sites and on their air. Can anyone forget the classic assassination fantasy by Fox’s Liz Trotta (who is still on the air)?

No one should be surprised that this kind of garbage is disseminated by Fox News. It is an enterprise that perfectly reflects the values (or lack thereof) of Rupert Murdoch, a man whose newspapers were caught hacking into the phone of a murdered schoolgirl. Any business that would do that would not be above encouraging the sort of sickness illustrated here. What’s surprising is that anyone would consider what Fox does to be news.