Earning a place at the top of the Fox Nation web site this morning is story that complies perfectly with the non-existent journalistic standards of Fox News. The article cites the uber-conservative blog FreeBeacon and features the headline “White House Deleted Al Qaeda From CIA Talking Points.”

Get the New eBook Fox Nation vs. Reality from Amazon.com. 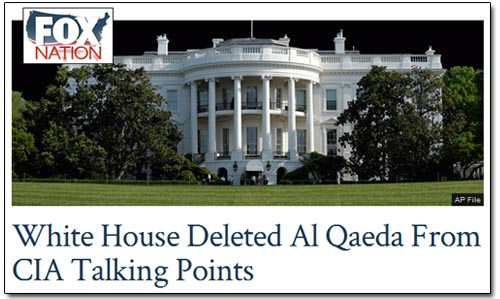 As usual, the Fox Nationalists only got one thing wrong with their story: the whole story. As it turns out, there is no evidence that the White House deleted Al Qaeda from the CIA talking points. What’s more, there is nothing in the article that affirms the falsehood in the headline.

This story hinges on the latest effort by the right and Fox News to malign President Obama and to politicize the tragic deaths of Americans in Benghazi, Libya. There has been a well coordinated smear campaign seeking to blame Obama not only for attacks perpetrated by terrorists, but also for a cover-up of information about those attacks. The GOP is also exploiting the affair to derail the possible appointment of U.N. Ambassador Susan Rice to be the next Secretary of State.

However, the partisan outrage has been woefully short of any substance. The right has been clamoring for answers from the White House, but when they get the answers they pretend that they didn’t hear anything. The official White House response from Ben Rhodes, Deputy National Security Advisor, stated clearly that…

“This question came up as to whether the White House had edited Susan Rice’s points and the points that were provided to Congress and the administration — the only edit that was made to those points by the White House, and was also made by the State Department, was to change the word “consulate” to “diplomatic facility” since the facility in Benghazi had not — was not formally a consulate. Other than that, we worked off of the points that were provided by the intelligence community.”

And if that weren’t clear enough, recent testimony by Gen. Petraeus backed up the White House’s version of events in closed-door testimony before congress. Rep. Peter King (R-NY), a harsh critic of the President, spoke with reporters after the testimony and said that Gen. Petraeus told the committee that the CIA approved the talking points after they were edited and said it was “Okay for it to go.” When asked if he was upset about Al Qaeda being removed, he said that he was not, according to King.

Ordinarily that would suffice to quell speculation about some far-ranging conspiracy to murder American diplomats and sweep the scandal under the rug. But Fox News was never interested in the facts in the first place. They have latched unto this invented controversy to damage the President and they don’t intend to let go merely because the truth contradicts their narrative.

10 thoughts on “Fox Nation vs. Reality: The White House Did Not Edit CIA Talking Points”