The War on Christmas is in full swing, folks. And the latest battle occurred last night on The O’Reilly Factor.

O’Reilly brought on David Silverman, President of American Atheists, to set up a manufactured debate over the place of Christmas in society, particularly when sponsored by agencies of the government. In the heated exchange, O’Reilly frequently bellowed at his guest whom he called a “fascist” at one point. But the segment’s most surreal moment came when O’Reilly sought to make the argument that public displays of faith on government property are permissible because… 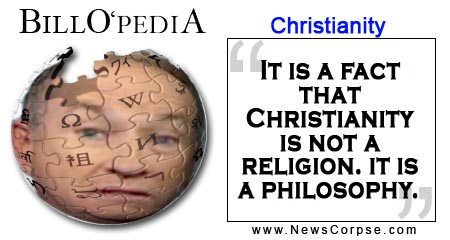 Yikes! That’s a rather astonishing declaration. I wonder if Christians know that what they are practicing is philosophical, not religious. Among the repercussions of this revelation is that Christianity would not be protected by the First Amendment which prohibits Congress from “respecting the establishment of religion.” The Constitution says nothing about philosophies.

Just to be clear, Here is the definition of each from the Merriam-Webster Dictionary

re·li·gion noun \ri-?li-j?n\
(1) : the service and worship of God or the supernatural (2) : commitment or devotion to religious faith or observance.

phi·los·o·phy noun \f?-?lä-s(?-)f?\
(1) : all learning exclusive of technical precepts and practical arts (2) : the sciences and liberal arts exclusive of medicine, law, and theology.

It seems to me that Christianity fits squarely in the definition of religion with its worship of God and devotion to faith. Philosophy, on the other hand, explicitly excludes Christianity as a theology.

O’Reilly has said some idiotic things on this subject. Like when he wrote in his auto-bloviography “Next time you meet an atheist, tell him or her that you know [me]. Then ask him or her if they still don’t believe there’s a God.” But this makes no sense at all. It is an insult to his audience who are not likely to be pleased that their religion has been downgraded. They will surely chafe at their savior being lumped in with the likes of Aristotle, Confucius, Nietzsche, and Sartre, none of whom walked on water or rose from the dead (that we know of). And if supporting the Constitution’s principles of equality and free expression make you fascist, then there are tens of millions of American fascists. Don’t anybody tell O’Reilly or he’ll start a war on the Constitution.

[Update] Bill O’Reilly has doubled down on his insistence that Christianity is not a religion. In fact, he said that the people who think it is are “so stupid it’s painful.” But if you’re looking for stupidity, it’s in O’Reilly’s argument that Christianity cannot be a religion because “there are many different churches that promote the Christian philosophy in many different ways.” Right Bill, and all of them are “churches.” O’Reilly also quoted from a letter by Calvin Coolidge that he said proved that Christianity was merely a “state of mind,” despite the letter saying that “there will be born in us a Savior…” Now that’s not religious at all, is it?