It’s been three months since the Republican Party took a beating at the polls losing the White House as well as two Senate seats and seven in the House. Yet they are still immersed in a vicious debate over whether their policies are driving away majorities of the electorate or if it’s just a messaging problem.

Heavyweight GOP operatives like Karl Rove, Eric Canter, Jim DeMint, Rush Limbaugh and various Tea Party goons are polishing their finest bluster and throwing blame around like cream pies at a clown convention. What they seem to be missing is that their messaging has been the one part of their tactical campaign that has been working. Americans, for the most part, know exactly what Republicans stand for, they just don’t like it and voted against it in droves. So the the response from the GOP is to take another stab at obscuring their true intent by developing another phony facade behind which to campaign. That effort was mercilessly skewered last night by Jon Stewart on the Daily Show:

Stewart’s focus on the self-described “Word Doctor” Frank Luntz could not have been more appropriate. Luntz has positioned himself as the poster boy for political window dressing. 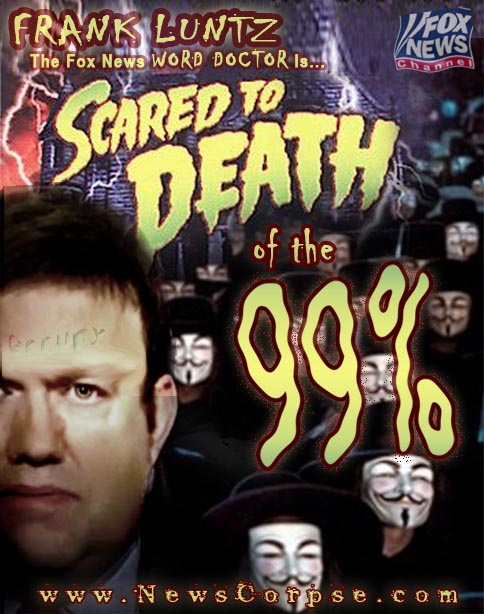 In the pre-2012 election warm-up he conducted a seminar for the Republican Governors Association to teach them how to practice more effective deception. He told his pupils that he was “so scared” of Occupy Wall Street and laid out a directive for them to refrain from using damaging phrases like “tax the rich,” “sacrifice,” and “capitalism,” and replace them with his equivalent of verbal comfort food.

While desperately dishonest, Luntz is actually closer to solving the GOP’s problems than most of his comrades in the communications arena who are Apocalypse vendors trying to outdo one another with tales of doom. They want to keep the right-wing sheep in state of constant and debilitating fear by insisting that America’s demise is imminent, freedom is hanging by a thread, and the foreign-born usurper in the White House is amassing his troops for a run at dictatorship. Compared to that, Luntz is as warm and fuzzy as you can get, albeit just as averse to the truth.

The Apocalyptists, however, are winning the internal GOP war. Their gloomy forecast has prevailed as happy-talkers like Luntz fade into the woodwork. Luntz even acknowledged the defeat in a post-election commentary about why “Fox News viewers ought to be outraged.” The doomsayers have a much higher wattage broadcast platform. And although they whine incessantly about what they imagine to be a liberal media, their own role in propagandizing the nation is far more aggressive. As Jon Stewart sarcastically put it…

“If only people knew what the Republicans were about. What the Republicans need is some kind of a 24 hour a day, 7 day a week perpetual messaging refinement and distribution resource. Preferably one cloaked in the trappings of journalistic authority but without any of its ethical constraints.”

Yeah, if only they had that. Then their message wouldn’t be getting suppressed by media titans like Current TV. Wait a minute – that doesn’t exist anymore. Well the leftists certainly have dominated the airwaves on talk radio for the last few decades. Oh wait, that isn’t true either.

I guess the fact remains that the only billionaire sponsored mouthpiece for extremist right-wing thought control is still Fox News. And despite their monopoly on media manipulation they still can’t stop whining about what victims they are.