The United States is undergoing a unique adventure in surreal governance. Its president has assembled a team of advisors and cabinet department heads that he is publicly assailing as ignorant and lacking the knowledge and abilities to perform the jobs to which he appointed them. Donald Trump is literally calling his own Intelligence chiefs incompetent.

This is the sort of breakdown that would be laughably unbelievable in political fiction. If Trump has such little respect for the people he appointed, why does he keep them in their jobs? Wouldn’t a sane president remove people who he thought were getting everything wrong so that they wouldn’t continue to put the country at risk? Would a mentally stable leader tweet that his “Intelligence people seem to be extremely passive and naive,” and then follow that up with another tweet saying that they “should go back to school,” and then allow them to keep their highly sensitive jobs in national security?

Trump was long ago proven to be a malignant narcissist who regards himself as the most brilliant expert at whatever he happens to be talking about at the moment. Despite having evaded military service with five phony deferments, he said that he knows more about military affairs than “his” generals. And on Thursday morning when he was asked a question about his Intelligence team, it resulted in this bizarre exchange (video below):

Reporter: Do you have confidence with [CIA Director] Gina Haspel and [Director of National Intelligence] Dan Coats to give you good advice?
Trump: No, I disagree with certain things that they said. I think I’m right, but time will prove that. Time will prove me right, probably.

So Trump has no confidence in his CIA director or his director of National Intelligence. And he followed that up with a rambling array of nonsense regarding Iran, Syria, Afghanistan, and North Korea. Literally none of it had any resemblance to reality. Trump has cloaked himself in a shroud of fantastical fiction that he either has convinced himself is true, or is deliberately lying about in order to advance some perverse narrative that is contrary to the interests of the nation. When John Brennan, a former CIA director who had the confidence of his boss, heard about Trump’s remarks, he tweeted that it “shows the extent of [his] intellectual bankruptcy” and that “All Americans, especially members of Congress, need to understand the danger [Trump] poses to our national security.”

So if Trump isn’t getting his advice on these critical issues from the experts he appointed, where is he getting it? Is it coming from his pal Vladimir Putin, with whom he’s been meeting in secret without any other Americans present to record their conversation or refer it to professionals for analysis? Or is he getting it from his shadow cabinet at Fox News: Sean Hannity, Laura Ingraham, Tucker Carlson, Steve Doocy, Lou Dobbs, Jeanine Pirro, etc.? Could there be a more pathetic batch of know-nothings in such positions of power?

Thursday afternoon Trump returned to his Twittering to announce that he had a meeting and that everything was now copacetic with his intelligence team. He said that the media “mischaracterized” what they said during the Senate hearing on Wednesday. But it was Trump who said that he had “no confidence” in his team, not the press. And he’s been saying it for quite a while. These tweets are obviously an attempt to repair the damage his big mouth got him into. But anyone who’s buying it is terminally naive.

….I would suggest you read the COMPLETE testimony from Tuesday. A false narrative is so bad for our Country. I value our intelligence community. Happily, we had a very good meeting, and we are all on the same page!

In the end, it’s America that is losing out by Trump’s reliance on foreign adversaries and propaganda shills at State TV (aka Fox News). Trump is selling out the nation for reasons that are not fully known yet, but probably have something to do with his indebtedness to Russian oligarchs, his clandestine conspiracy with Kremlin operatives to steal the election, or some other means by which he has been compromised and forced to serve as a puppet to our foes. And at this point, the only reason that the Intelligence community hasn’t resigned en masse is that they feel a patriotic duty to shield the country from the potential harm that Trump represents as its most virulent national security threat.

Trump: "No, I disagree with certain things they said, time will prove me right, probably." pic.twitter.com/7YEX2T2KFv

On Wednesday morning Donald Trump was asked if Russia is still targeting U.S. elections with the intent of influencing future outcomes. He responded with a categorical “No.” That, of course, contradicts his Director of National Intelligence, Dan Coats, who said Monday that Russia is still engaging in “ongoing, pervasive efforts to undermine our democracy.” That’s Trump dismissing the intelligence community that he said on Tuesday has his “full faith and support.” 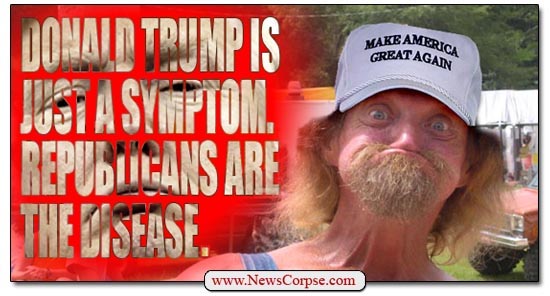 With support like that the intelligence community might as well just lay down in front of the bus and grit their teeth. There appears to be no principle that Trump is not willing to subvert, even within hours of having asserted it. That must make it very hard for his supporters to know what the heck they are supposed to believe. Ordinarily, cult leaders like Trump stake out definitive positions that their disciples can latch onto and recite in unison at rallies. “Lock her up” and “build the wall” are effective examples of that. But there is no such chantable slogan about the Russia affair.

In the meantime, Trump’s base (and I do mean base) is proving to be even more delusional than Trump himself. In a new Reuters/Ipsos poll, Republicans are siding with Vladimir Putin against American intelligence assessments with regard to whether Russia interfered with the 2016 election:

“A majority of registered voters, 59 percent, agree with the conclusions of U.S. intelligence agencies that Russia attempted to influence the U.S. election, the Reuters/Ipsos poll found. But only 32 percent of Republicans think that is true compared to 84 percent of Democrats.”

To be fair, the Republican electorate can’t possibly know what they are supposed to believe. Trump changes his position almost hourly. So they aren’t getting the sort of cues that cult members are accustomed to. And lord knows that aren’t capable of thinking for themselves. That leaves them scattering like frantic ants whose Capitol Hill has been washed away.

And that’s why Trump’s followers are infinitely more dangerous than Trump. He is one person who can (hopefully) be brought to justice and effectively neutralized. But his minions are less manageable and more unpredictable. They include NRA-theists and militias who are convinced of the existence of a “deep state” cabal determined to take their guns and throw them into gay-run, liberal, re-education camps. And they will align with any entity that strokes their egos and affirms their paranoid delusions. Especially if it features the sort of totalitarian control that makes them feel so cozy and pampered and safe. Which explains their affinity for Putin and Kim Jong Un – and Donald Trump.

Talk about your big government. Republican Senator Dan Coats of Indiana is applying strong-arm tactics to intimidate a television network for not being sufficiently deferential to God.

The controversy stems from an NBC Sports opening sequence to the U.S. Open Golf Championship. The segment, intended to be a moment of patriotism, included parts of the Pledge of Allegiance. As is routine with television promos, editing of the segment was performed due to time constraints. As a result the words “under God” were omitted from the segment.

The outrage exhibited by the religious zealots is not really a matter of much concern. They are entitled to express their opinions and advance their view of how religious issues are presented in the media. The problem here is that now a United States Senator has injected himself, and consequently the weight of the government, into this debate in a wholly inappropriate and offensive manner.

Senator Coats, in a flurry of self-righteous indignation, has dashed off a letter to the president and CEO of NBC, Stephen Burke. The tone of the letter is repugnant and intimidating, as Coats seeks to pressure the network into compliance with his religious views. Coats writes…

“I am writing to express my serious concern, and the concerns of the Hoosiers I represent, regarding NBC’s decision to air an edited version of the national Pledge of Allegiance not once but twice during the June 19, 2011 broadcast of the U.S. Open golf tournament. In the opening of this broadcast, NBC aired video showing schoolchildren reciting the Pledge, but omitted the words ‘under God, indivisible’ during the segment. Moments later, NBC again aired an edited version of the Pledge, this time omitting the words ‘one nation, under God, indivisible.'”
[…]
“I am disturbed with NBC’s decision to modify the Pledge for this broadcast. I understand that NBC acknowledged its error at a later point in Sunday’s broadcast, and has since stated that this action was a ‘bad decision’ made by a small group of individuals. Nonetheless, I remain concerned that such a decision to selectively edit the Pledge could be made in the first place. As a result, I would like to request that NBC provide me with a full written account of its decision-making process in this matter, including an explanation of why these specific words were omitted, and what actions NBC intends to take to prevent such inappropriate edits from occurring in the future.”

It’s bad enough that NBC was cowed into making an unnecessary apology, but under what authority is Coats requesting that NBC be prevailed upon to provide him with a written account of their decision-making process? What business is it of his, or the U.S. government, how a private business decides to edit a program for entertainment purposes? Perhaps he would also like an explanation for why “American Idol” is elevating secular pop singers to deity status? Has he not heard the commandment that “you shall not make for yourself an idol?” Maybe he would like to force CBS to develop a new show called “Creationism” to counter the blasphemous effects of “The Big Bang Theory?”

And where does Coats get off demanding that NBC tell him what actions they intend to take to “prevent such inappropriate edits from occurring in the future?” Who is he to decide that the edits were inappropriate? Isn’t that the job of the producers, writers, and marketers of the private enterprise making the program? Is Coats implying that there is some government imposed prohibition to airing this, or some similar segment, in the future?

This is government intrusion on media of the most heinous sort. It is trampling on the feet of the First Amendment. This over-reach should be denounced by everyone from religious freedom advocates to Tea Party proponents of “getting government off our backs.” (Although I wouldn’t hold my breath waiting for the Tea Party to demonstrate their moral consistency).

To see a person in a position of power abusing it like this is a chilling spectacle. Sen. Coates needs to study the Constitution and refrain from imposing his religious beliefs on private enterprise. The Pledge of Allegiance is not mandated by law to be recited on any television program and there is no legal stipulation that it never be edited – Thank God!