Breitbart News has suffered a dramatic decline in the “quality” (if you can call it that) of their yellow journalism since the sudden demise of their guiding blight, Andrew Breitbart. They embarrassed themselves by falling for a hoax from the same satirical site they previously blasted the Washington Post for believing. They published a “scoop” claiming that Defense Secretary Chuck Hagel took donations from a group that, as it turns out, didn’t exist. Their practice of “vetting” President Obama yielded dud after dud. And their attempt to cinematically canonize their namesake bellyflopped at the box office. The magnitude of their collapse is almost too painful to watch.

Consequently, they seem to have grabbed a life line from Fox News to prevent any further shrinkage. Their web site now features a section where they post headlines from their “partners,” but the only partner listed is Fox News. They have posted adoring homages to Fox personalities like Kirsten Powers who pretend to be liberals while bashing everything to the left of Attila the Hun. And for their sycophancy, they now get regular promotions of their articles on Fox News. 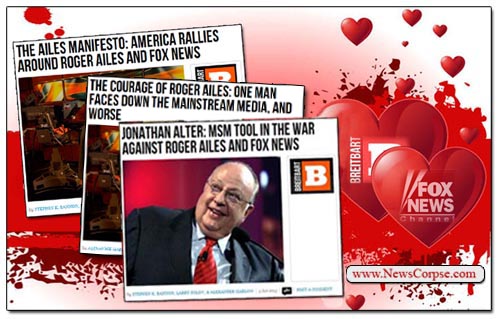 Have you got your copy of “Fox Nation vs. Reality” yet?

But this week revealed the most blatant Fox fluffing yet between the two conservative lie factories. On June 5, Breitbart published an article defending Fox News CEO Roger Ailes from disclosures contained in a new book by reporter Jonathan Alter: The Center Holds: Obama and His Enemies. For some reason it took the the three biggest cheeses at Breitbart News to compose this syrupy ode to Ailes: Stephen Bannon, Executive Chairman; Larry Solov, President; and Alexander Marlow, Managing Editor. And just last week the same three stooges penned a fawning tribute to Ailes titled “The Ailes Manifesto: America Rallies Around Roger Ailes and Fox News.” Of course, America did no such thing, but the Breitbart executive sweets sure exposed their deep infatuation.

This week, Breitbart’s sensationalistic headline called Alter an “MSM Tool in the War Against Roger Ailes and Fox News,” and dismissed him for being employed by a news enterprise owned by a partisan billionaire (Michael Bloomberg). Amazingly, the BreitBrats displayed no sense of irony considering they themselves are busy licking the boots of their own partisan billionaire (Rupert Murdoch).

After several paragraphs of self-righteous and predictable carping over their delusional perception of the media as hopelessly liberal, the BreitBrats think they have nailed Alter with this assertion: “Breitbart News did some checking, and according to authoritative Fox and News Corporation sources, Ailes never talked to Alter for this book.” Well, they didn’t have to check with Fox for that because Alter never claimed to have talked to Ailes for the book. Then, after that criticism that failed to cite any Fox Newser by name, the BreitBrats complained that Alter failed to cite “any inside Fox or News Corp. sources” by name.” Then they followed that up with another quote from “one Fox source.” In fact, the rebuttal to nearly every criticism the BreitBrats made of Alter’s book was based on either an unnamed source, or had no attribution at all. There were thirteen itemized passages from Alter’s book with which Breitbart took exception. They were all summarily dismissed with ambiguous notations like…

So after castigating Alter for deigning to employ unnamed sources, the BreitBrats rely almost entirely on unnamed sources for their rebuttal. But even worse, they tally up the results of their own missive and report that six of Alter’s thirteen allegations were false. That means, of course, that 7 were true or partly true.

Someone may need to inform the BreitBrats that if you’re trying to refute a list of assertions in a critical book, you are not making much headway if a majority of them, by your own reckoning, are true. And that doesn’t even take into account the likelihood that the ones Breitbart tagged as false may still be true, despite their objections. After all, as Alter said in response to an article in Politico where Ailes rebuffed his book, “The question is, do you believe me or Roger Ailes?”

Setting aside for the moment that Ailes is a professional liar, for the BreitBrats the answer to alter’s question is obvious. They believe their corrupt and corpulent sweetheart, Roger Ailes. And they would follow him anywhere, as long as he continues to plug their pitiful blog. Romantic, aint it?

Since at least last May, I have been unveiling the efforts of extremist right-wing politicians and pundits to signal our enemies in Al Qaeda that now is the time to strike (See: The Republican Advance Team For Terrorism). They have been waving their arms excitedly and shouting to anyone who will listen that America is less safe and, therefore, vulnerable. They have been partnering with their pals in the press to make sure that the message gets out. And they know full well that the enemy is paying attention.

Dick Cheney is the de facto leader of this forward brigade. He outlined the theme over five years ago when he said:

And ever since Barack Obama took up residence at 1600 Pennsylvania Avenue, Cheney and his comrades have endeavored to produce the very perception of weakness about which he pretended to warn. The question is, how does announcing to the terrorists that our nation is weaker make us safer? Are they just pasting a big bulls eye on America and hoping for an “I told you so” moment? I desperately hope that that’s not the case, but there aren’t many other plausible explanations.

Finally, some in the media are beginning to recognize the danger into which Cheney et al are leading us:

Keith Olbermann: “We are at war,” Dick Cheney came down from Mt. Megalomaina to announce, “and when President Obama pretends we are not it makes us less safe.” If Mr. Cheney believes we are at war, then he, as the most recent former occupant of the vice-presidency is under the strictest obligations to put aside his case of terminal partisanship and rally to the support of his president at a time of war. Instead his remarks not only give encouragement to the enemies of this country, they give them an exact measure as to how successful they have been in damaging our freedoms.

Jonathan Alter: The problem I think we have now is sort of crystallized by former Vice-President Cheney’s role in this debate. I think that he has actually gotten to a place where he is actually emboldening the terrorists.

It’s about time that these traitors are called to account for their actions. If they believe that our country is at risk, they should consult privately with the administration and/or national security officials to alleviate that risk. They could work behind the scenes to close any security gaps and contribute to enhancing our safety without alerting the enemy to our alleged shortcomings. They certainly should not be coaching the opposing team from the sidelines.

It is bad enough that Americans have had to surrender so many basic freedoms in the face of terrorist threats. And every new attempt results in another knee-jerk response to prohibit an otherwise ordinary activity. This continually tightening noose of restrictions that we are forced to endure can only be celebrated by our enemies. They know they can alter our way of life and each time they do they gain encouragement to proceed. As I wrote in my 2006 ode to the Pre-9/11 Mindset:

They’ve seen the passage of the Patriot Act that limits long-held freedoms. They’ve seen our government listening in on our phone calls and monitoring our financial transactions. They see us lining up at airport terminals shoeless and forced to surrender our shampoo and Evian water. They see us mourning the loss of our sons and daughters who are not even engaged in battle with the 9/11 perpetrators. They see us as fearful and submissive. Is this not emboldening the terrorists for whom this perception of weakness will be seen as yet another invitation to attack?

We need to find a way to defend ourselves that protects both our lives and our way of life. We cannot allow terrorists to take control of our daily affairs. When they observe the effect of their attacks, even those that don’t succeed, they regard it as a victory. They cheer as we establish ever more restrictive and intrusive policies that cost us billions of dollars. They see themselves as winning tactically and at the same time draining our financial resources, which is a prime objective of theirs.

This is unacceptable. And the irresponsible, unpatriotic actions of Dick Cheney and company play right into the hands of the enemy. It is good to see Olbermann and Alter honestly discuss the vile and reckless behavior of these rightist thugs. It would be even better if more of the media were equally as candid. But this is a start and it should be encouraged. Because if the Cheneys of the world have their way it will be a dark world indeed.