If you thought that the dystopian cult that sprung from Donald Trump’s “Make America Great Again” (MAGA) crusade was bad, you aint seen nothin’ yet. The messiah worship that is prevalent among the Trumpist wackos is continuing to evolve in the most foreboding fashion imaginable.

Newsweek is reporting on the emergence of an offshoot of the Trump Cult that has been anointed “Dark MAGA.” The article describes this budding Internet trend as…

“A small fringe of Donald Trump’s supporters [that] is calling for the former president to get back on the highest stage of U.S. politics with a vengeance with the motto: #DarkMAGA. More of a meme than a political slogan, Dark MAGA is a post-alt-right aesthetic that promotes an authoritarian version of Trump.”

RELATED: Trump Says ‘I Am the Chosen One’ After Tweeting that He’s ‘The Second Coming of God’

One has to wonder how “an authoritarian version of Trump” differs from the version that has been polluting American society for the past several years. Setting aside the obvious similarities, Newsweek goes on to paint a chilling, but accurate portrait of the Dark MAGA minions saying that…

“Dark MAGA supporters are calling for a ruthless, unforgiving version of Trump to take revenge on his political enemies at the 2024 election [and that] Many of the messages posted by Dark MAGA supporters incite violence and contain misogynistic and/or racist comments.”

Once again, how does that make these MAGAts in any way distinguishable from the standard variety of Trumpish pestilence? Is there some obscure Trump sect that is NOT ruthless, unforgiving, vengeful, and hateful? If so, they’re doing a darn good job of concealing their existence. And from their secret lair they still manage to promulgate the themes of MAGAism. Which are conspicuously similar to those of QAnon:

“According to [UNC Prof. Alice E.] Marwick, the result of this is a ‘heavy victim mentality’ among some Trump supporters. ‘The general messaging that the Democrats are evil, that children are under threat, that people may need to take extreme acts, even political violence to protect their children and their values, I think is consistent across the (far-right) spectrum,’ says Marwick.”

So the question as to the alleged dawning of Dark MAGA is this: Is it really any darker than what produced the January 6th insurrection? The promotion of white nationalism? The loss of 1,000,000+ Americans due to COVID? The treasonous embrace of murderous tyrants like Vladimir Putin? The contempt for the Constitution and the law? The spreading of racism, misogyny, and homophobia? The ceaseless lying? The undermining of democracy? The defiling of faith? The division of the American people? The assault on the free press and the media? And the march toward authoritarianism?

MAGA is already a movement that has sought to sabotage virtually every institution that sustains a free society: government, law, media, arts, academia, science, religion, family, philanthropy, and economics. And the advent of Dark MAGA doesn’t alter that one bit. It is simply a new name for an old poison. It is nothing more than the already noxious manifestation of Dark Trump. And the antidote is still the glaring light of truth and a commitment to flushing Trumpism out of the body politic.

The international web spun by Donald Trump’s businesses appear to be testing the limits of personal/political conflicts of interest. Kurt Eichenwald of Newsweek published an article today that reveals the depths of Trump’s involvement with foreign businesses and governments. The extensive detail in the story makes it impossible to ignore the national security implications were Trump to become president. 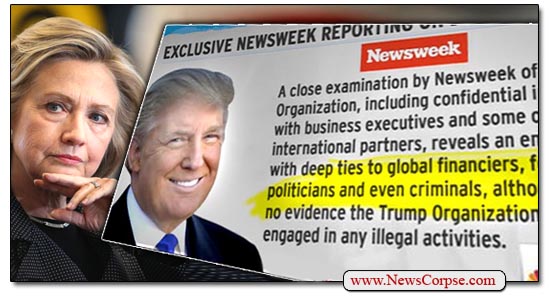 In the opening paragraphs Eichenwald lays out the central theme of the article that questions whether it would be possible for Trump to govern unless he, and his family, completely severed ties with The Trump Organization:

If Donald Trump is elected president, will he and his family permanently sever all connections to the Trump Organization, a sprawling business empire that has spread a secretive financial web across the world? Or will Trump instead choose to be the most conflicted president in American history, one whose business interests will constantly jeopardize the security of the United States?

A close examination by Newsweek of the Trump Organization, including confidential interviews with business executives and some of its international partners, reveals an enterprise with deep ties to global financiers, foreign politicians and even criminals, although there is no evidence the Trump Organization has engaged in any illegal activities.

The questions raised in the Newsweek piece didn’t escape the view of Hillary Clinton. She posted a series of tweets (twenty, in fact) challenging Trump to respond to the allegations. She began in tweet #1 by asking “Will you sever ties with your company linked to foreign leaders, questionable organizations, and criminals if you become president?” And she concluded with tweet #20 saying “It’s pretty clear: Trump’s spent his life unscrupulously looking out for his own wallet above all. Why would that change as president?” And all the questions in between pose distinct dilemmas for Trump were he to try to answer them. Which, knowing the weakness of his character, he will certainly avoid.

This may be the best Conventional Media article of the year: How Tea Partiers Get the Constitution Wrong. It was written by Andrew Romano for Newsweek and is a fairly comprehensive look at how the Tea Party sanctifies the Constitution while simultaneously basking in their ignorance of it. It is worth reading in its entirety, but here are some choice excerpts:

“Tea Partiers engage with the Constitution in such a selective manner, and for such nakedly political purposes, that they’re clearly relying on it more as an instrument of self-affirmation and cultural division than a source of policy inspiration.”

This is demonstrated every time a Tea Bagger makes the fatuous claim that [fill in the blank] doesn’t appear in the Constitution. This can refer to anything from separation of church and state to gay marriage to income taxes. However, it never refers to the FAA, workplace safety, the minimum wage, or corporate welfare like farm subsidies or incentives to ship jobs overseas.

“In the current Congress, conservatives like Michele Bachmann have suggested more than 40 additions to the Constitution: a flag-desecration amendment; a balanced-budget amendment; a ‘parental rights’ amendment; a supermajority-to-raise-taxes amendment; anti-abortion amendment; an anti-gay-marriage amendment; and so on. None of these revisions has anything to do with the document’s original meaning.” […]

“The truth is that for all their talk of purity, politicians like Palin, Angle, and Miller don’t seem to be particularly concerned with matching their actual positions to the Constitution they profess to worship. For them, the sacred text serves a higher purpose.”

Tea Baggers are quick to gush their reverence for the original intent of the Constitution – slavery, sexism, and all. And they are just as quick to disparage it and rush to desecrate it with oppressive and irrelevant amendments that are contrary to its underpinnings of freedom.

“The point is always the same: to suggest that the Constitution, like the Bible, decrees what’s right and wrong (rather than what’s legal and illegal), and to insist that only they and their ilk can access its truths. We are moral, you are not; we represent America, you do not. Theirs is the rallying cry of culture war.”

“Thomas Jefferson put it best. In a letter to a friend in 1816, he mocked ‘men [who] look at constitutions with sanctimonious reverence, and deem them like the arc of the covenant, too sacred to be touched’“

The effort to transform the Constitution into a divinely inspired, holy document, and its authors into saints, is not new. I wrote about this last June in an article about the right-wing movement to advance the theory of American Exceptionalism, which is nothing more than warmed-over American Supremacy and just as repulsive as Hitler’s conception of a Master Race.

“[Beck] has declared that the Constitution was the result of divine inspiration and is as immutable as holy scripture. He regards the nation’s founders as saintly. One of those founders, Thomas Jefferson, expressly disagrees with Beck. On the matter of Constitutional immutability, Jefferson wrote that ‘…with the change of circumstances, institutions must advance also to keep pace with the times.’ That’s hardly an argument for strict constructionalism. And with regard to the divinity of himself and his contemporaries, Jefferson spoke disparagingly of the arrogance of one generation dictating the terms of existence to their heirs, castigating those who would ‘…ascribe to the men of the preceding age a wisdom more than human.’“

It is encouraging to read an article like Romano’s in Newsweek. Hopefully it will be read and heeded by many more and this fallacious notion that the Tea Party has been ordained by God to restore our Constitution will be discarded for its arrogance and complete disconnection with reality.