The differences between the negligent, incompetent, and wantonly corrupt administration of Donald Trump, and that of the incoming Joe Biden administration have been evident in just the few hours that Biden has been President. The stench of ego-driven criminality has been replaced by the refreshing fragrance of experience and compassion. And America has heaved a massive, collective sigh of relief. 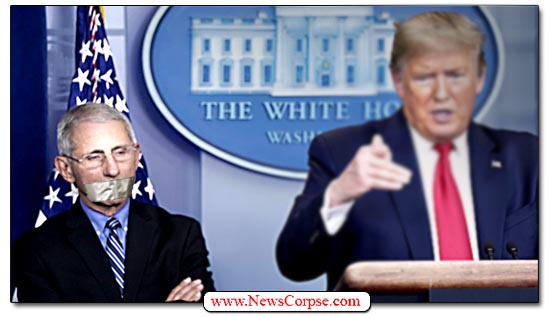 Among those relieved by the passing of the Trump era is Dr. Anthony Fauci, the widely respected expert on infectious diseases. His presence on Trump’s phony Coronavirus Task Force – that was nothing more than a thinly veiled reelection campaign operation – was awkward, to say the least. He frequently had to cover his face in shame as Trump dispensed pure idiocy and flagrant falsehoods. Often he was ignored or even uninvited to the press briefings altogether.

Those times are over. Dr. Fauci was interviewed Friday for the first time on MSNBC’s Rachel Maddow Show. It was the sort of enlightening hour of useful information that the public sorely needs during these troubling times. And Dr. Fauci was clearly pleased to have the opportunity to communicate with Maddow and her audience. In fact, he addressed his prior absence from the show during this exchange:

Maddow: Dr. Fauci…The country really trusts you in particular, but we’ve seen this sort of disappearance of, and sort of muzzling of, these other senior folks within the government. Do you think that we’ll have more access to you, both the press and the public?

I don’t think you’re going to see that now. I think you’re going to see a lot of transparency. You might not see everybody as often as you want, but you’re not gonna see deliberate holding back of good people when the press asks for them. We were assured that that’s the case. And that goes along with what you were mentioning before about different types of pressures that were put on. It was a tough situation. It really was.

Those gracious and honest remarks also reveal the dangerous censorship by Trump of critical information necessary for the preservation of life during a deadly pandemic. Trump never cared about the welfare of the American people, particularly if it contrasted with his own narcissistic self-interest. Dr. Fauci said as much in another interview on CNN (where he had also been barred by Trump from appearing) when asked…

John Berman: Did the lack of candor over the last year and lack of facts, in some cases, cost lives?
Fauci: You know, it very likely did… When you start talking about the things that make no sense medically and no sense scientifically, that clearly is not helpful.

“There’s no secret. We’ve had a lot of divisiveness, we’ve had facts that were very, very clear, that were questioned. People were not trusting what health officials were saying.” pic.twitter.com/NDOP0Nhy3W

In the weeks, months, and years to come, we are going to learn more and more about how unconscionably destructive Trump was for the nation and the world. And the damage he’s done will not be repaired overnight. But at least we won’t be seeing the sort of suppression and deliberate disinformation going forward that was so painfully prevalent while Trump was occupying the White House.