The foremost personality trait of right-wing politcos is their unreserved devotion to shameless hypocrisy. They will start a sentence and manage to contradict themselves before they reach the period. It’s a skill that requires practice and commitment, but then what else do they have to do? It’s not like they ever do research or fact-checking. 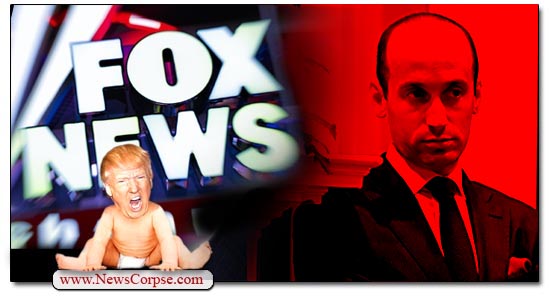 On Sunday morning’s episode of Maria Bartiromo’s Fox News Trump-Fluffing Hour, the host welcomed longtime Donald Trump mouthpiece and Senior White Nationalist Advisor, Stephen Miller. Like his führer, Miller still hasn’t figured out that he lost the election. And like so many other whiny conservatives, he believes that he’s a victim of a massive, invisible, liberal cabal that is suppressing him and censoring his speech. They generally make this complaint while on one of the most watched cable news networks or in the pages of national newspapers.

Despite Miller’s acute hatred for Democrats in general, and President Joe Biden in particular, he had the gall to offer Biden some typically self-serving and utterly useless advice (video below):

“President Biden has missed an historic opportunity to make good on his pledge to be a president for all Americans and to stand up and say the censorship must stop. The blacklisting must stop. We have to listen to and respect all viewpoints in America. But he has not done that.”

Never mind that even though Biden has only been in office for eleven days, he has repeatedly reached out to Republicans who snubbed him and continue to deny that he’s really president. And if Biden hasn’t called for an end to Republican censorship, it might be because he isn’t suffering from the delusions of victimhood that the Trump cultists are consumed by.

What’s more, Miller’s insistence that “We have to listen to and respect all viewpoints in America,” could not be more ridiculous. We most assuredly do not have to respect the opinions of QAnon crackpots who claim that Democrats are sex-trafficking baby-eaters. We do not – must not – respect the opinions of GOP cranks like Marjorie Taylor Greene, who believes that the mass murders of children were staged. And no sane person should respect the opinions of Rudy Giuliani, who blames the Trump Insurrection on Antifa. And we must never show respect for Fox News seditionists like Tucker Carlson who are openly advocating for a violent civil war.

But Miller wasn’t through whining yet (video below). Miller, who is best known for his affinity for the Third Reich, was compelled to deliver a lecture on “freedom” to Biden and the Democrats. “Freedom is a way of being,” he blurted out as if he were proud of his insightfulness. Then he elaborated…

“If we as Americans get to the point where we’re willing to discriminate against people based on their point of view, being whether they’re Republican or Democrat, conservative or liberal, we have fundamentally abandoned our core values. And you’re right, it’s gonna lead to we’re not gonna bank with you; we’re not gonna give you a mortgage; we’re not gonna lease you a car; we’re not gonna represent you in a court of law.

Miller might have extended that to say “We’re no not gonna bake you a wedding cake; we’re not not gonna rent you an apartment; we’re not gonna admit you to college.” But, of course, those are all things that he wants to prohibit people who don’t look like him from doing. His hypocrisy is like an avalanche barreling down the side of Bigotry Mountain. And Bartiromo just sits there and gawks at him adoringly. This is what it’s come to. The oppressors are complaining about being oppressed on their national television networks. Poor things. Don’t ya feel so sorry them?

Stephen Miller says Biden has missed out on a “historic opportunity” to be a president for all Americans because he has “turned a blind eye” to people being denied book deals pic.twitter.com/kYAE7R7M3x