Fifteen minutes before midnight on December 31, 2020, Donald Trump tweeted a couple of utterly delusional video clips from his new favorite media bootlickers (and most grossly misnamed TV channel ever), the One America News Network (OANN). The clips slobbered all over Trump’s imaginary achievements and continued to argue that, contrary to reality, he won the presidential election by a landslide. 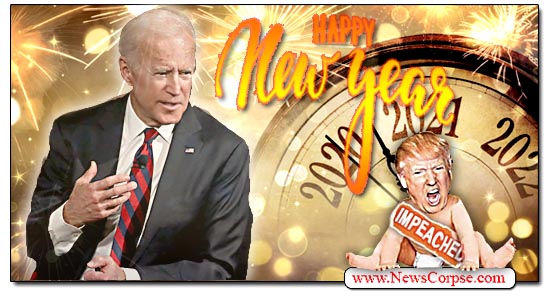 That’s how Trump chose to usher in 2021. Not with a message of condolences for those who have suffered due to his negligence, incompetence, and deliberate malfeasance. Not with any wishes of hope for the future. But with self-serving homages to his narcissism and the patently insane notion that he will be serving another four years.

Trump may be serving some years going forward, but in not in the White House. He will be facing numerous indictments for criminal acts committed both before and after his unfortunate presidency.

However, it remains to be seen what vocation Trump will decide to pursue as he returns to civilian life. Heaven knows he isn’t qualified for anything but egomaniacal demagoguery. He failed at real estate with properties that routinely lose money. He failed at business with at least six bankruptcies. He failed at entertainment with a reality TV game show that suffered deep declines in the ratings. He failed tragically by mishandling (and lying about) the coronavirus pandemic. And his whining about nonexistent election fraud has failed so badly that he is resorting to incitements of violence.

Rumors abound that Trump may be interested in developing a media company or launching a show on an existing network. But his opportunities in that arena are critically limited. To begin with, who could watch him every day without suffering a severe brain hemorrhage? And while the OANN and Newsmax would likely welcome Trump, they have puny audiences that ultimately would fail to satisfy his ravenous ego.

That would leave Fox News. It’s the network that thrust him into into the mainstream and was most responsible for his election in 2016. Clearly they didn’t have the same clout to repeat that atrocity in 2020. That’s partly because more Americans actually know him and how dangerous and ignorant he is. But Trump will have another problem with any aspirations to be a Fox News personality: He has spent much of the past year viciously attacking the network. For instance:

That isn’t likely to endear the network brass to a former president with no power. All that Trump has to promote himself is an abundance of infantile hostilities, blinding paranoia, inherent weakness, and intellectually vacant ideas that predominantly revolve around his own misplaced and undeserved vanity.

Trump does have one other asset he can exploit. That’s the devotion of his glassy-eyed cult followers who actually trust him more than than they trust their their own religious leaders. But that sort of reverence is notoriously thin and short-lived. It is bound a by watery glue that is based on fleeting self-interest and the perceived power of the cult leader.

Without his presidential perch, Trump is just a relentless whiner, albeit “the most fabulous” one (in his own words). He is grifter who adores himself but believes everyone else is out to get him. He is a fading reality TV sham who relied on celebrity. When that is gone, so is the loyalty of the cult. And without that, Trump is toast. Which means that the hysterical video below is likely an honest representation of Trump’s dismal future. Happy New Year everybody!

Trump 2021 – and then prison. pic.twitter.com/XctcjLsK1x