The floundering Fox News Trumpskyites are getting more desperate with each day that passes since Joe Biden decisively defeated their hero Donald Trump. It wasn’t enough that their inflammatory, seditious rhetoric incited a violent attack on Congress that resulted in five deaths and dozens more injured. Nope. They are recklessly persisting in the dissemination of the Big Lie that the election was stolen, knowing the harm that it’s done and will do. 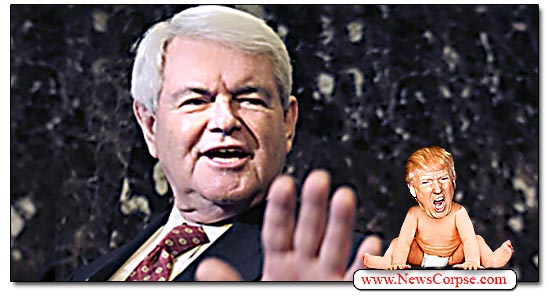 Notable among the Trump Insurrection Squad is Fox News contributor and larcenous ex-Congress-critter, Newt Gingrich. He has not paused for a moment his campaign to overturn the 2020 presidential election, or to rip apart America’s democracy trying. In pursuit of those treasonous goals, Gingrich took to Twitter to post a preposterous comment that could only make sense to a crack-addled cretin with habitual evil intent. Gingrich tweeted that…

If President Biden really wanted unity rather than surrender he would call on the Senate to drop impeachment. With troops in the capitol, cries for exterminating and “reeducating” Republicans, AOC’s fear of being around Republicans, the divisions grow deeper and more bitter.

SERIOUSLY? Gingrich is attempting to draw a comparison between Trump, a cowardly hulk of blubber, and the courageous Putin critic Alexei Navalny. Never mind that Trump is more like an aspiring Putin-esque dictator who is desperately clinging to power, while Navalny is a fighter against everything that Trump stands for. And Nalvalny is willing to put his life on the line for the principles of free and fair elections that respect the will of the people, while Trump has been struggling for months to undermine democracy from his White House bunker, aided and abetted by authoritarian cohorts like Rudy Giuliani, Ted Cruz, and Gingrich’s confederates at Fox News.

Gingrich’s comparison of Trump to someone who survived prison and poisoning is ludicrous on its face. Trump is infamous for evading military service during the Vietnam War by claiming to have nonexistent bone spurs. Trump could never be a martyr because the only cause to which he is loyal is himself.

What’s more, Gingrich’s idea of “unity” is actually the surrender of Democrats to the losers in November’s election. He believes that it’s necessary to let criminals go free rather than risk riling up the criminal’s supporters and accomplices. In reality, unity and the healing that Americans yearn for, is only possible when the traitors have been appropriately punished. But Gingrich would rather portray the perpetrators of a violent insurrection as victims who deserve some perverse manifestation of mercy.

Gingrich even refers to “cries for exterminating Republicans,” when he is the only one who ever raised that cry. He whined to Sean Hannity, without any justification, that Biden associates were “radicals who believe if they could exterminate the Republicans that would be one way to get to unity.” And now he’s relying on his own lie to further the attack he himself invented.

Make no mistake… What Gingrich is really doing is issuing a threat. He is insinuating that any attempt to hold Trump accountable for his crimes, via impeachment and/or prosecution, will result in more violence on the part of Trump’s glassy-eyed disciples, spurred on by provocateurs like Gingrich. That’s the same thing that Trump has done, and that Fox News has done, in the weeks since the American people chose Biden over Trump.

Gingrich is sending a signal to Trump’s Seditionists to stand by in case Trump is held to the same legal standard that all Americans are held to. He is preparing them to stage another attack on American democracy, in defense of the wannabe Tyrant of Mar-a-Lago. And that is behavior that is purposefully treasonous and subject to prosecution itself. So the Biden Justice Department should be prepared to indict Gingrich and his ilk shortly after Trump’s Senate impeachment trial. That’s the path to the unity and justice and healing that our nation needs so badly.

To Republican deadenders still fighting to overturn Joe Biden’s decisive victory over Donald Trump, there are an endless stream of lies and alternative facts to disseminate. Never mind that doing so incited a violent insurrection in Washington, D.C., by Trump’s glassy-eyed cult disciples. To Republicans the battle to install an authoritarian dictatorship is an overwhelming compulsion. 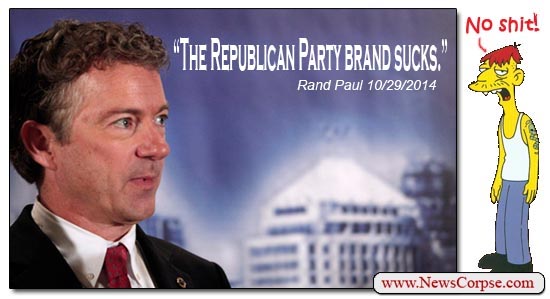 Confirmation of the GOP’s tyrannical aspirations was provided by Sen. Rand Paul of Kentucky. On Sunday morning he appeared for an interview on ABC’s This Week with George Stephanopoulos. And he was as determined as ever to advance the Big Lie that the election was stolen from Trump. Stephanopoulos should have ended this interview after the first thirty seconds.

Paul didn’t add anything new in the six minutes that followed to his primary argument that consisted of two points: 1) There was massive fraud for which there is no evidence, and 2) Liberals are being mean to him by calling him a liar when he lies about there being massive fraud. (Full video below if you have the stomach for it).

Paul repeatedly whined that Stephanopoulos was calling all Republicans who pushed the Big Lie liars. But there’s a simple way to prevent being called a liar: Stop Lying! Paul never considered that option and throughout the interview continually reiterated the Big Lie that the election was stolen. That’s the same lie that resulted in the Capitol riots where five people died, dozens more injured, and American democracy fouled by the stench of Trump and Republican treason. Not that Paul cared about any of that, as demonstrated in this exchange:

Stephanopoulos: I want to begin with a threshold question for you. This election was not stolen. Do you accept that fact?
Paul: Well, what I would say is that the debate over whether or not there was fraud should occur. We never had any presentation in court where we actually looked at the evidence since most of the cases were thrown out for lack of standing, which is a procedural way of not actually hearing the question.

Notice that Paul does not accept the fact that “This election was not stolen.” Even worse, he expands on the lie by asserting that the matter was never adjudicated in court. It is patently false that “most of the cases were thrown out for lack of standing.” In fact, very few were dismissed for that reason. Most of the cases – 86 of them – were thrown out after the evidence was presented and found to be wholly without merit. Paul went on to lie that…

“There were several states in which the law was changed by the Secretary of State, and not the state legislature. To me those are clearly unconstitutional.”

Actually, making decision of that sort is what secretaries of state were elected to do. And Paul is hallucinating if he sees anything in the Constitution that says otherwise. But he still wasn’t through lying…

There probably were some instances of invalid votes, just as there are in every election. But all fifty states, including those with Republican governors and election officials, certified the election results. Even Trump’s own Attorney General, Bill Barr, said there was no evidence of voter fraud that could have had any impact on the outcome. Yet that wasn’t enough for Paul either. He continued his lying…

“What I would suggest is that if we want greater confidence in our elections – and 75% of Republicans agree with me – is that we do need to look at election integrity, and we do need to see if we can restore confidence in the elections. […] Where you make a mistake is that people coming from the liberal side like you, you immediately say that everything’s a lie instead of saying there are two sides to everything.

Secondly, Paul’s contention that “there are two sides to everything” is pitifully idiotic. There are not two sides to facts. For instance, there isn’t another side to the fact that the Earth is round. And there isn’t another side to the facts that have been established by both Democratic and Republican officials that the election was not altered by fraud.

Paul’s reckless dishonesty is not just another incident of radical right-wing distortions of reality. The deadly consequences of his lies were seen by the world three weeks ago as his confederates sought to invade Congress and assassinate its members. People like Paul need to be held accountable and expelled from Congress for their deliberate and dangerous deceit. And the determination of these cretins to continue to spread their lies makes the impeachment conviction of Trump all the more necessary in order to preserve the integrity of our democracy.

GS: “There are not two sides to this story. This has been looked at in every single state.” https://t.co/kEzanF2Ysi pic.twitter.com/DDufLZvwBB