The professional prevaricators at Fox News really had to extend themselves to achieve their latest pinnacle of dishonesty. The lead story on their community web site, and Home of Flagrant Fallacies, Fox Nation, was another in their series of attacks on the Affordable Health Care Act (aka ObamaCare). The blazing headline read “Even Obama Buddy Warren Buffett Has Soured on ObamaCare: Scrap It and Start Over!” 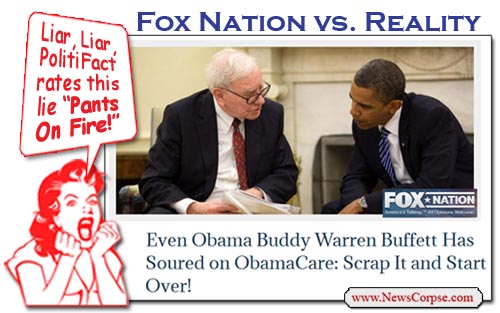 That would be a disconcerting development if it were true. But like so many things on Fox, it is not only untrue, it is an embarrassing fictionalization that reputable news enterprises avoid at all costs. Fox, it seems, seeks out this sort of malarkey.

Here’s the story. An obscure web site (Money Morning) that appears to thrive by hooking readers into dubious investment schemes, published an article that purported to be a recent interview with the Oracle of Omaha, Warren Buffett. The article, titled “Buffett: Scrap Obamacare and Start All Over,” presented quotes that were portrayed as his current, and negative, opinions about ObamaCare. For instance…

“We have a health system that, in terms of costs, is really out of control,” he added. “And if you take this line and you project what has been happening into the future, we will get less and less competitive. So we need something else.”

There are just two little problems: 1) The comments were actually made three years ago and 2) They were so far removed from context that Buffett’s spokesman disavowed them. The truth is that Buffett was commenting on a draft version of health care reform that was being debated in the senate in 2010. Contrary to the impression left by Money Morning that Buffett was criticizing ObamaCare in its current state as the law of the land, Buffet was merely offering his opinion of what he would prefer while the bill was still being crafted.

It is fair to say that Buffett had some constructive criticism at that stage of the bill’s development. However, when asked directly whether he would support the bill, he said that he would favor it over the other option of no bill at all. So Money Morning misrepresented the timing of the quotes, as well as the substance of their meaning. And to make matters worse, their blunder was picked up by numerous right-wing news outlets who were more than happy to hype what they thought was a falling out between Obama and Buffett.

Along with Fox Nation, the false story was published by the Wall Street Journal, the Weekly Standard, and the highly choleric NewsBusters. Since the publication, Money Morning edited their article to reflect that the content was three years old, but they did not acknowledge that their previous version was wrong (here is a link to the cached original text). Both the Weekly Standard and NewsBusters posted corrections. But neither of Rupert Murdoch’s properties, the Wall Street Journal and Fox Nation, have bothered to set the record straight.

The degree of dishonesty exhibited here was documented by PolitiFact, who did a thorough analysis. Their conclusion was that the misrepresentation of Buffett’s comments was a “Pants On Fire” lie. It is well worth reading their entire article. Included in their findings is the fact that Buffet expressed his support for ObamaCare just last year, and he praised the Supreme Court’s decision upholding it.

It’s noteworthy that the Fox Nationalists posted their phoney story well after it was already known that it was wrong. And they have had plenty of time to discover the error and correct it, but have not done so. That’s because they don’t care whether their reporting is true or not. They only care if they can influence their gullible audience, even if that means misinforming them. And that is something that they do better than just about anybody else.