Earlier this week investigative reporter Sharyl Attkisson announced that she had resigned from CBS News. According to Politico, sources say that her departure was due to her frustration with what she considered the network’s liberal bias. However, the truth is more likely that the network was disappointment with Attkisson’s sloppy and partisan reporting.

The notion that CBS News is some kind of bastion of liberalism is impossible to take seriously. Just last November CBS ran an embarrassing 60 Minutes segment on Benghazi that was based wholly on the account of a disreputable figure whose story they never verified. They later had to apologize and retract the story, but the problem was not due to an unfortunate mistake. The right-wing bias at CBS gets its direction from the very top. The President of CBS News is David Rhodes, who came to the network from Fox News. Politico also reported that…

“Attkisson’s coverage of the Obama administration, which some CBS staffers characterized as agenda-driven, had led network executives to doubt the impartiality of her reporting. […and that…] Pat Shevlin, the executive producer of CBS Evening News, was especially wary of Attkisson’s motives and had even dismissed her, in private, as a partisan carrying water for Republicans.”

Generally Fox News is openly hostile to what they regard as the establishment media and they mercilessly pound their competitors as neither fair nor balanced. But in the wake of Attkisson’s resignation, Fox has become her biggest cheerleader. Yesterday Neil Cavuto brought in rightist media hack Brent Bozell of NewsBusters to lament Attkisson’s fate and complain that CBS had cut her off because of her politics. However that opinion ignores the fact that Attkisson’s reporting had recently been shown to be inaccurate and unfairly critical of the Obama administration. That is the reason that her stories have not been getting on the air.

In the course of this full-throated defense of Attkisson’s journalistic failures, Bozell went on an extended rant aimed at all of the “mainstream” media and CBS in particular. He complained about what he believed to be insufficient coverage of the attack on the U.S. consulate in Benghazi, Libya. Only on Fox is there still a raging controversy over what the administration did and said following the attack. Everywhere else the phony allegations promoted by conservatives have been thoroughly debunked. But Bozell went completely off the rails when he said…

“It stands to reason that she [Attkisson] is out because they stopped letting her report the news when she started reporting on Benghazi. […] If George Bush – if it had been on his watch that we had Benghazi, do you think they’d be quiet?”

To this Cavuto replied “He’d be impeached.” And once again, the rank hypocrisy of Fox News is displayed in all its partisan glory. If Fox were the least bit interested in factual representations of events they would have to have acknowledged that during the Bush administration there were at least thirteen Benghazis (i.e. terrorist attacks on U.S. embassies and consulates that resulted in dozens of casualties including the death of David Foy, an American diplomat). Not only was Bush never threatened with impeachment over those atrocities, no one at Fox ever suggested that Bush was the least bit responsible for them. Nor did they criticize Bush as weak for not retaliating afterwards. 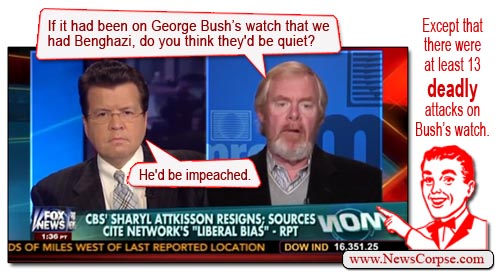 Attkisson says that she is going to focus on completing the book she is writing with the totally non-biased title “Stonewalled: One Reporter’s Fight for Truth in Obama’s Washington.” It is being published by HarperCollins, a subsidiary of Rupert Murdoch’s News Corp. From there it is a fairly safe bet that she will find a perch at Fox News where she can continue to peddle her dishonest stories and her rightist views with the full support of her bosses. After all, Fox has long history of scooping up the worst rejects after they have been discarded by other networks.