For most of the past century, and especially the past five years, Republicans have stood forthrightly against every initiative aimed at relieving the suffering of low-income Americans. From opposition to extending unemployment benefits to slashing the SNAP (food stamps) budget to blocking an increase of the minimum wage, the GOP has exhibited stark insensitivity to the hardships of working families. And their determination to advance the interests of the rich is consistently at the top of their agenda.

Today President Obama signed an executive memorandum expanding the availability of overtime pay to millions of workers whose employers have been exploiting their labor by classifying them as management, despite the fact that they earn less than $24,000 a year. That classification enables the employer to forgo paying these employees when they work more than forty hours per week.

Republicans came out swinging as soon as the White House made the announcement of the change in policy. All of the typical right-wing complaints about stifling economic growth, killing job creation, big government intrusion, and executive branch overreach, gushed from the mouths of GOP politicians and Fox News pundits. 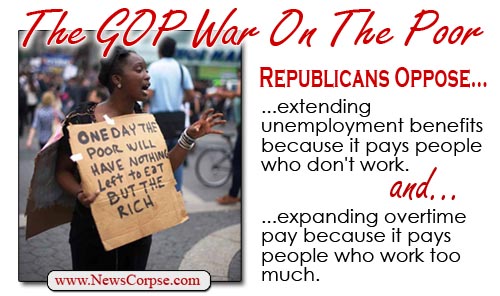 What none of these partisans bothered to mention is that putting more money in the pockets of working class citizens is one of the most effective methods of stimulating the economy. These are people who, by necessity, recirculate their funds by spending them on goods and services, thus producing more growth and creating more jobs. Also not mentioned is how this policy will reduce expenditures on entitlement programs due to recipients being raised out of poverty and no longer requiring assistance.

Nevertheless, the conservative knee-jerk response to Obama’s directive predictably ignores the benefits while inventing problems that they cannot support with facts. Their determination to advocate on behalf of the ruling class and the wealthy corporations who oppose these measures is paramount to the Republican hierarchy.

What’s more, the GOP is engaging in blatant hypocrisy by making disingenuous arguments against the changes proposed by Obama, although they never had any such complaint when George W. Bush did the same thing in 2004 when he updated the overtime rules raising the minimum threshold from $250.00 per week to $455.00. That was ten years ago and it’s time to revisit the situation taking into account current economic conditions, inflation, and cost of living increases.

However, what was good enough for Bush and the GOP a decade ago, is seen by Republicans as the destruction of the economy by a radical tyrant bent on crippling the nation today. For some reason, when the Bush administration unilaterally expanded overtime rules with the stroke of his pen it was appropriate and beneficial, but when Obama does it, it is treasonous and unconstitutional.

Shameless self-promotion:
Get your copy of the acclaimed ebook Fox Nation vs. Reality today at Amazon

That’s the level of logic that this President has had to face for the last five years. And if he is finally getting around to recognizing the futility of reasoning with the obstructionist Tea-publicans in Congress, it is about damn time.

8 thoughts on “Lose/Lose: The GOP Hates You If You Don’t Work, And They Hate You If You Work Too Much”