The case was made long ago that Fox News is a blight on the media map. It is bad for journalism. It is bad for Democracy. It is bad for America. A so-called “news” network that repeatedly misinforms, even deliberately disinforms, its audience is failing any test of public service embodied by an ethical press. 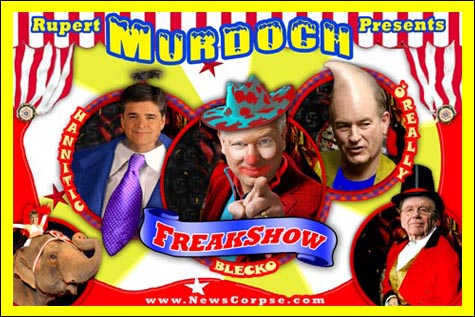 I, personally, have made the case for an embargo of Fox News by Democrats and progressives (see Starve the Beast: Part I, Part II, Part III), documenting via studied analysis that there is no affirmative value to appearing on Fox News – a network that has established itself as overtly hostile to the Democratic message and its messengers.

However, there is another side to this that has not been addressed previously. Republicans might be well advised to avoid Fox News as well. There is a case to be made that Fox News is demonstrably harmful to the Republican Party. In fact, it may be the worst thing to happen to Republicans in decades. That may seem counter-intuitive when discussing Fox News, the acknowledged public relations division of the Republican Party. Fox has populated its air with right-wing mouthpieces and brazenly partisan advocates for a conservative Republican agenda. They read GOP press releases on the air verbatim as if they were the product of original research. They provide a forum where Republican politicians and pundits can peddle their views unchallenged. So how is this harmful to Republicans?

If all we were witnessing was the emergence of a mainstream conservative network that aspired to advance Republican themes and policies, there would not be much of note here. Most of the conventional media was already center-right before there was a Fox News. But Fox has corralled a stable of the most disreputable, unqualified, extremist, lunatics ever assembled, and is presenting them as experts, analysts, and leaders. These third-rate icons of idiocy are marketed by Fox like any other gag gift (i.e. pet rocks, plastic vomit, Sarah Palin, etc.). So while most Americans have never heard of actual Republican party bosses like House Minority Leader John Boehner and Senate Minority Leader Mitch McConnell, posers like Joe the Plumber and Carrie Prejean have become household names.

Fox News has descended into depths heretofore reserved for fringe characters. They are openly promoting the wackos who believe that President Obama is ineligible to hold office because he isn’t a U.S. citizen. They feature commentaries by secessionists and even those calling for an overthrow of the government and the Constitution. This explains how folks like Ralph Peters, a retired military officer who said that the Taliban captors of a U.S. Soldier would be saving us a lot of trouble and expense if they would just kill him, earn airtime on Fox. Peters previously told Fox News that he favors military strikes against media targets. This explains how Glenn Beck can agree with a guest that it would be a good thing if America were attacked again by Osama bin Laden. And don’t even get me started on Victoria Jackson, who has joined an ever-lengthening line of psycho-Chicken Littles who compare the President to Hitler.

The list of loonies extends to politicians like Michele Bachmann, entertainers like Ted Nugent, and of course, the talk show pundits like Rush Limbaugh, whose maniacal rantings are elevated by Fox into their version of political dialogue. It’s a dialogue that is consumed with ACORN conspiracies and Manchurian presidents. The problem is that by elevating bona fide nutcases, they are debasing honest and informed discourse. The mental cases are crowding out any reasonable voices that might exist amongst the more moderate Republicans (if there are any left). Fox appears to have made a tactical decision to permit the inmates full run of the asylum.

As a result, the Fox News audience is being dumbed down by a parade of paranoid know-nothings. This strategy appears to be successful for Fox in that it has attracted a loyal viewership that is eager to have their twisted preconceptions affirmed. The conflict-infused fare in which Fox specializes is a ratings juggernaut – just like any good fiction. However, this perceived popularity is having an inordinate impact on the GOP platform. By doubling down on crazy, Fox is driving the center of the Republican Party further down the rabid hole. They are reshaping the party into a more radicalized community of conspiracy nuts. So even as this helps Rupert Murdoch’s bottom line, it is making celebrities of political bottom-feeders. That can’t be good for the long-term prospects of the Republican Party.

With the Fox network unabashedly promoting the most ridiculous rumors, myths, and nightmares of the rightist fringe, moderate and independent Americans will grow ever more suspicious of the Fox/GOP agenda. Most Americans do not believe that Sonia Sotomayor is a racist; or that FEMA is constructing concentration camps; or that we are on a march toward socialism, communism, fascism, or whatever the right is peddling this week. Most Americans do not believe that Barack Obama is a Muslim, a reptilian alien, or the anti-Christ. In short, most Americans think that the loopy yarns spun by Fox News are fables told by madmen – and believed by even madder men and women who wallow in their doomsday utopia.

Fox News is fond of boasting about their ratings dominance. It is a daily occurrence and the structural core of their argument that they reflect the mood of America. The GOP has bought this argument in its entirety. So it is important to note here that success in the Nielsen ratings has no correlation to public opinion polling. The ratings only measure the program choices of Nielsen’s survey participants. That is a subset of the population at large, and not a particularly representative one. It is a sample focused on consumers, not voters. And its respondents are just those willing to have their TV viewing monitored 24 hours a day, which skews the sample in favor of people who aren’t creeped out by that. What’s more, viewing choices are not necessarily an endorsement of the opinions presented in the program. There are many reasons people choose to watch TV shows, the most frequent being its entertainment value. So any attempt to tie ratings to partisan politics is a foolish exercise that demonstrates a grievous misunderstanding of the business of television.

As for what constitutes success in the television marketplace, due to the broad diversification of available programming, it doesn’t take much to be heralded as a hit. A mere 3 share (3% of people watching TV) will land you in the top 10. For cable news the bar is set even lower. In fact, the top rated show on the top rated cable news network (The O’Reilly Factor) only gets about 3 million viewers. That’s less than 1% of the American population. It’s also less than World Wrestling Entertainment, SpongeBob SquarePants, and the CBS Evening News (the lowest rated broadcast network news program). By contrast, America’s Got Talent is seen by 12 million viewers – four times O’Reilly’s audience.

Numbers this low ought not to inspire much excitement from political operatives. Nevertheless, Republicans are riding the coattails of Fox News as if it were representative of a booming conservative mandate in the electorate. They are embracing Fox’s most delusional eccentrics. This is leading to the promotion of similar eccentrics within the party. Which brings us the absurd spectacle of the network’s nuts interviewing the party’s pinheads.

The inevitable result of this system of rewarding those farthest from reality is the creation of a constituency of crackpots. It is an endorsement of the philosophy brewed by the Tea Baggers that espouses racism, tyranny, and armed revolt. It is enabling a frightening corps of openly militant adversaries of democracy, free speech, and Constitutional rule. It is the sort of environment that produced the murders of Dr. George Tiller and Holocaust Museum guard Stephen Johns.

This is a textbook example of how the extreme rises to the top. It is also fundamentally contrary to the interests of the Republican Party. The more the population at large associates Republican ideology with the agenda of Fox News, and the fringe operators residing there, the more the party will be perceived as out of touch, or even out of their minds. It seems like such a waste after all of the effort and expense that Fox put into building a pseudo-journalistic enterprise with the goal of confounding viewers with false news-like theatrics.

Make no mistake, Fox News is still managed by hard core party patrons. And I’m not referring just to opinion-driven commentators like Glenn Beck, Bill O’Reilly, and Sean Hannity, although they are bad enough. No, I am talking about executives and editors like CEO, Roger Ailes, former Nixon and Bush media consultant. I’m talking about Washington Managing Editor and VP, Bill Sammon, an avid right-wing alum of the Washington “Moonie” Times. I’m talking about Business News Chief and VP, Neil Cavuto, antagonistic interrupter extraordinaire. And let us not forget the head hype-master, Rupert Murdoch, whose UK operations were just discovered to have been unlawfully wiretapping celebrities, politicians, and even members of the Royal Family. Augmenting that executive roster are the GOP regulars who are straight out of the just retired Republican White House: Karl Rove, Dana Perino, John Bolton, Dan Senor, and Linda Chavez. And then there are the Fox News clowns…er…“contributors” like Dick Morris, Ann Coulter, Fred Barnes, Charles Krauthammer, Rick Santorum, Newt Gingrich, Bernie Goldberg, Michele Malkin, and on and on. If nothing else, Fox is a full-employment program for rightist weasels (and they also operate the Conservative Book Promotion Club).

The mission of Fox News from its inception was to be more than just a voice of opposition to Democrats. It was to utterly crush the left end of the political spectrum leaving only a teetering right wing with no counter balance. Yet, despite the torrid embrace between Republicans and Fox News, it is apparent that Fox is the source of a sort of friendly fire that is decimating the GOP by exalting its most outlandish and unpopular players. And since Republicans have not been particularly popular anyway lately, the anchor being thrown to them by Fox can’t be all that helpful – – – Except to Democrats.

38 thoughts on “Fox News Is Killing The Republican Party”