To accuse Glenn Beck of being a greedy, capitalist, manipulative, profiteering, hustler would probably be received as a compliment by him. He spreads the marketing on pretty thick with TV, radio, magazines, books, movies, and personal appearances. And all of these self-aggrandizing ventures are hawked shamelessly on his multiple media platforms.

Recently, however, Beck has come under fire for his promotion of products and services offered by his advertisers. This sort of hucksterism is problematic because it makes it impossible to tell if the product endorsements are genuine or if they are payoffs to keep the advertiser happy. That obvious conflict of interest seems to escape Beck. What’s worse, shilling for products in this manner can result in the spokesperson deliberately misleading his audience in order to create or enhance the market for a product.

And that is precisely what Beck is being accused of doing on behalf of his gold advertisers. During the course of his programs on radio and TV, Beck is painting a picture of America, and the world, as teetering on the ledge of catastrophe. He insists that the economy is in freefall and the dollar is collapsing. He has even floated conspiracy theories about the dollar being replaced by a new world currency. All of these frightful predictions are encouragements to his gullible disciples to protect their assets by converting them to gold.

Now, even Beck’s employer, Fox News, has registered some concern about Beck’s relationship with his sponsors. Joel Cheatwood, Senior Vice President of Development at Fox, says that the network’s legal department asked Beck’s representatives for clarification about his work for Goldline International. The response was that Beck is not a paid spokesman. That’s fortunate because Fox’s official policy on the matter is that…

“Fox News prohibits any on-air talent from endorsing products or serving as a product spokesperson.”

So how do they explain this: 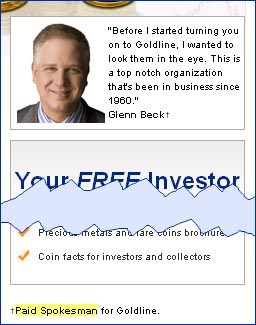 The Goldline web site has prominently featured Beck endorsing their products. The footnote referenced on the ad identified Beck explicitly as a “paid spokesman.” However, it no longer does so. The designation was recently changed to read “radio sponsor.” And concurrent with that, both Goldline and Fox are now claiming that Beck was never a paid spokesman in the first place. It was all just a big misunderstanding. Never mind the fact that Beck has appeared in specially produced videos touting Goldline.

The doomsday gold rush is a staple for Beck’s media empire. At least four of his current advertisers are gold dealers (Goldline, Superior Gold Group, Investment Rarities, and Rosland Capital). Granted, Beck is having a hard time attracting advertisers since he called President Obama a racist. The remaining ads are almost all for conservative publications or products and services exploiting one crisis or another. And this is not just a Beck phenomena. Goldline and other gold traders are also pitched by such financial wizards as Mark Levin, Dennis Miller, Fred Thompson, Laura Ingraham, Lars Larson, Michael Smerconish, Monica Crowley, and G. Gordon Liddy.

If the world doesn’t come to an end soon, Beck’s viewers are going to be very disappointed – and poor. Gold prices have cratered in the past month, losing more than $100.00 per ounce. And the worst thing that can happen from the perspective of Beck, and those who foolishly took his investment advice, is for the economy to recover. And therein lies the problem with regard to conflict of interest.

In order for Beck and his coterie to prosper, the economy must not. Beck has a financial stake in the nation’s economic affairs turning south. He also has a personal stake in that he does not want to be seen as having been wrong about his dire predictions. So his programs’ advertising, his investment portfolio, and his reputation all require that our country fail. Could that have something to with Beck’s relentless barrage of lectures about how the country is going to hell and it is time to build an Ark? Could it have something to do with his rallying cry for God, guns, and of course, gold?

Could it? Could be.

One thought on “Thar’s Gold In Glenn Beck’s Shills”