Last night on the Daily Show, Jon Stewart let down his guard and revealed that he is not the independent voice of reason that he would like everyone to believe. He is not the beacon of truth who slays the hypocrites and deceivers of the international media conspiracy. No, he is just another lackey of powerful corporate interests that want to take over your life. The shocking evidence of this followed a segment wherein he mocked Fox News’ CPO (Chief Paranoia Officer), Glenn Beck:

At the end of this innocuous (and hilarious) comedic skit, Stewart’s true colors were shown. As he announced that the program would be back after a commercial break, a graphic appeared on screen, accompanied by a voice-over, divulging that the Daily Show was brought to you by Progressive Insurance.

PROGRESSIVE Insurance? If you were not previously convinced of Stewart’s complicity in the clandestine plot to destroy America, well, you can no longer feign ignorance. This is an overt admission of his membership in a cabal that hates the principles that made this country great. It is a cabal that includes one-world government advocates and global industrialists like Warren Buffet and Rupert Murdoch. This covert coalition is so thoroughly ingrained in our culture that it brazenly plays both sides of the fence as it seduces and perverts our country, our neighbors, and even our children. If you think you are safe from this threat, think again. Even Glenn Beck has fallen into its web. Pay close attention to his own words:

Beck, 02/20/10: “Progressivism is the cancer in America and it is eating our Constitution. And it was designed to eat the Constitution.”

Do you hear that Jon Stewart? Progressivism was built from the ground up to be hungry for parchment made of – can you believe this? – HEMP! Progressivism just wants to get stoned by consuming the document that enumerates our great nation’s values as if it was a batch of Alice B. Stalin brownies. And after you’re shit-faced (that’s a medical term – look it up), the forces of evil are free to feed you any ludicrous notion that suits their whim, i.e. social justice:

Beck, 11/03/09: “Progressives think they know better than you and they want to control every aspect of your life. […] They like to call it “social justice” or fairness; I like to call it Marxism.”

And with that, Beck prevailed upon his disciples to abandon their corrupt churches for ministering to the poor. With regard to the progressive obsession for control, Stewart ridiculed this threat last night with obscene references to self-gratification. But this threat is all too real. Witness the remarks Beck made on the subject earlier this month:

Beck, 03/12/10: “So here is the deal, if you don’t have insurance and you need to take the government insurance, then the government has the right to regulate every aspect of your life.”

There you have it. When even Glenn Beck can declare publicly that the government has the right to rule over you like a slave master, then you know the risks are deadly serious. And notice how Beck wavers between a complaint that progressives want to regulate “every aspect of your life,” to an assertion that the government already has that right which he regards as entirely appropriate. This is all carefully designed to freak you out!

It is no accident that Jon Stewart is sponsored by Progressive Insurance. And it ought not to surprise you that Beck was once sponsored by GEICO (but they recently left him along with 100 other advertisers). 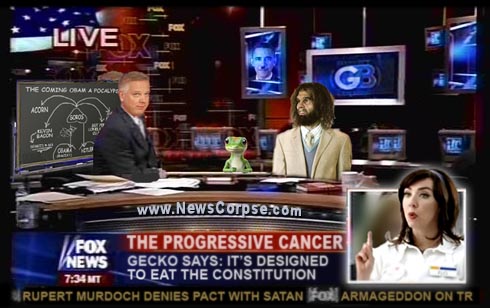 Note that GEICO, which is owned by billionaire and Illuminati lord Warren Buffet, was originally known as the “Government Employees Insurance Company.” That’s right! It was a state takeover of insurance by government union thugs. Today GEICO is supposedly engaged in fierce competition with Progressive. This may explain why Beck is so adamantly opposed to the Progressives who are sponsoring Stewart. Or maybe not. In the end they are all a part of the same congregation of villainy and much of the contentiousness may be staged to throw us off.

But whatever you do, don’t be mislead. They are coming after us. They are determined and relentless and, in addition to that, they just keep going and going (which reminds me, watch out for that cap and trade Energizer bill, and take your Avodart). And don’t let the veneer of comedy seduce you into submission. This is not about rodeo clowns and satirists. It is not about laughter and wackiness and goofballs who act like they’re crazy. Never forget these words from someone who knows what it means to be presumed to be nuts:

“I have been laughed to scorn as a prophet; for many a year my warnings and my prophecies were regarded as the illusions of a mind diseased […] I appear in the eyes of many bourgeois democrats as only a wild man.”
~ Glenn Beck Adolph Hitler, September 1936

4 thoughts on “Jon Stewart: A Pawn Of The Insurance Lobby?”