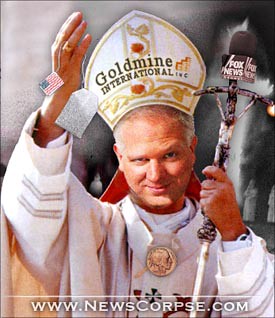 In the past year Glenn Beck has lost over a hundred advertisers. In the last four months he has lost about a third of his viewers. He is being boycotted by African Americans for calling President Obama a racist, Christians for calling social justice Marxism, and union members for incessantly insulting workers who seek to organize in order to defend themselves from the abuses of industrial barons.

As his show becomes less profitable, and reaches fewer viewers, Beck must surely be worrying about how committed his bosses are to keeping him on the air. After all, what motivation would there be to do so if he were bringing in neither cash nor ratings?

Beck’s response to these circumstances has thus far has been to dial the crazy up another couple of degrees. His ravings have become less tethered to reality than ever, and his paranoid layering of conspiracies aimed at him by innumerable covert enemies has escalated to Apocalyptic proportions.

He is palpably afraid, but not of progressives or Muslims or community organizers under the bed. He is afraid that his empire is at risk of collapsing on top of him. And so he has taken the next illogical step in his descent by clutching desperately to his sugardaddies at Fox.

On his radio program today he winced at the thought of Fox News CEO Roger Ailes, or News Corp CEO Rupert Murdoch, getting hit by a newspaper truck. He imagined that with them gone Fox News would would be a “scary” place. And then he commenced his holy benediction:

“Those two hold off the outside world. The beating that those guys take, the pressure that those guys are under, not just from me but almost every voice in Fox, is incredible. […] Fall to your knees and thank God for Fox News. Pray for Roger Ailes and Rupert Murdoch. Pray for them. Pray for strength and spine, and pray that everybody involved has chicken salad for lunch so it doesn’t clog anybody’s arteries. Keep them going.”

This outbreak of syncophantism has but one purpose for Beck: to plant a slobbering wet kiss on the mugs of the two people who hold his fate in their greedy hands. Beck knows that he is dead weight. After becoming anathema to advertisers, his saving grace was that he could deliver viewers to his leadout and jumpstart the primetime schedule. But now he is somewhat less than reliable in that role.

So what else is left for Beck? He is isolating himself from his colleagues who are often embarrassed by him. Former Fox contributor Jane Hall cited Beck as one of the reasons she left the network. Former Fox News anchor Eric Burns expressed gratitude that he doesn’t “have to face the ethical problem of sharing an employer with Glenn Beck.” He has also lost much of what remains of the sane conservative community. Right-wing blogger Charlses Johnson castigated Beck as “an alcoholic, weeping, ranting, creationist talk show host.” Respected conservatives David Brooks and David Frum have both been veering from the ideological excesses of Beck, with Frum lamenting the “reckless defamation” practiced by Beck.

For many of these conservative reprobates, Beck and Fox News have strayed so far into loony territory that they are harmful to the cause of conservatism. I composed a detailed analysis on that very subject almost a year ago: Fox News Is Killing The Republican Party. The question is, will Ailes and Murdoch come this realization, or will they succumb to Beck’s worshipful flattery?

4 thoughts on “Glenn Beck Thanks God For Fox News”