As if to prove that television news executives are lowest form of life on the planet, CNN recently held talks with Glenn Beck about forming a joint venture between the struggling network and Beck’s lame video blog, The Blaze. According to a report in Rupert Murdoch’s Wall Street Journal it would be…

“…a new venture between CNN-parent Time Warner and The Blaze that would replace HLN’s current programming with Blaze programming.” 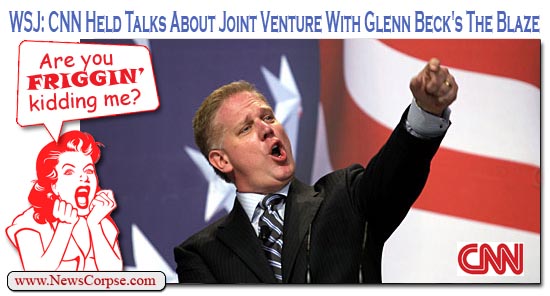 What on Earth could they be thinking? The prospect of bringing Beck back to CNN (or television) makes no sense whatsoever. When Beck left his show on CNN’s Headline News it was in the ratings dumpster. He routinely lost to his competition and was the lowest rated program on CNN’s primetime lineup. He gathered more viewers at Fox News, but only because his toxic philosophy was a better fit for the fear-mongering, right-wing propaganda channel. However, when he left Fox News just two years later he was a pariah who couldn’t keep advertisers due to his rancid rhetoric and hate-filled, paranoid tirades. Even Fox acknowledged that he was a liability. After Beck, pretending that the exit was his idea, said he told himself that “If you do not leave now, you won’t leave with your soul intact,” Fox retorted…

So what exactly did CNN find attractive about the notion of reignited their romance with this loser? He has an even smaller audience now than he did at CNN five years ago. That’s why he is currently on a PR campaign to rehabilitate his noxious image. But despite admitting that he “has said stupid things,” and his other disingenuous attempts to cast himself as repentant for his past vulgarities, he is still the same vituperative huckster of gloom that he has always been. For example, he recently complained about not being able to use the words “fag” and “nigger,” in reference to artwork by a guest on his show. He is also being sued for defamation by a student from Saudi Arabia whom Beck falsely accused of being a key figure in the Boston marathon bombing.

Where does CNN think his advertisers would come from? A visit to TheBlaze website reveals that he has no advertising other than Google Ads. He is still anathema to the Fords, Campbell Soups, Procter & Gambels, Fidelitys, etc. So if Beck can’t produce ratings, and he can’t attract advertisers, but he is widely reviled and divisive, what could explain CNN’s interest in him?

There only two possible answers to that question. One is that CNN is desperate beyond all comprehension. They are like a drowning man grasping for the only thing in the water, even if it’s an anchor. And secondly, CNN is run by tabloid TV king Ken Jautz who was promoted from his position as head of HLN. It was while he was at HLN that Jautz gave Beck his first job in television. So perhaps it is that unique brand of insanity that causes one to do the same stupid things over and over expecting a different result.

The fact that CNN was participating in these talks says something about their health as a news organization. They would not be considering this if they had bright prospects for the future. It also says something about Beck’s media operation. His Blaze video unit is currently financed by viewer subscriptions. If that were as successful as he pretends it to be, he would not be contemplating giving the same programming away for free on cable TV. That would dry up his web subscription base. He would also have to be pretty desperate to consider returning to the network about which he said…

“If you ever think that CNN is a rational, normal, non-leftist organization, look who they hired [referring to Crossfire co-host Van Jones as a ‘communist revolutionary’].”

More recently, Beck asked himself “Why is CNN in a ratings free fall?” And he gave himself the answer that it was “the unbelievable level of manufactured outrage on the network.” Actually, that may have inspired him to seek out these talks. He may have seen that as a sign that the network was the perfect platform for an outrage manufacturer like himself. But it doesn’t clear up why CNN would seek to recruit someone with such a horrible opinion of the network.

Reports on the talks indicate that they broke down over financial terms, not ideology. That makes the whole incident even worse. Apparently CNN is cool with Beck’s evangelical, ultra-conservative messaging. And it isn’t just that he’s conservative, but that he is so violently hostile toward progressives that he once said that to stop them “you’re going to have to shoot them in the head.” And despite that sort of vile discourse, CNN only walked away from the negotiations over money. Journalism, honesty, integrity, civility, etc., never entered into it.

[Update:] Brian Stelter, reporting for CNN, says that it was Beck who sought to hook up with CNN, but that from the CNN side “The talks were never serious.” This may just be CNN covering its ass so as not to be embarrassed by the disclosure of the talks, but it also confirms that Beck is scrambling to keep his head above water.