When CNN announced the hiring of radio talk jock Glenn Beck almost two years ago, they used words like “cordial,” “conversational” and “not confrontational” to describe him. What they delivered was the polar opposite of that, as has been well documented by Media Matters. Despite CNN’s laughable depiction of Beck as “Miss Congeniality,” they knew exactly the sort of piffle they were peddling. Their programming strategy stated at the time was to…

“…build Beck into the type of TV personality that could siphon viewers from Bill O’Reilly, Joe Scarborough and other conservative hosts.”

Beck’s ratings for November 2007 (25-54 demo) reveal a program on life support. At this point the humane thing to do would be to pull the plug and put Beck (and innocent TV viewers) out of their misery. 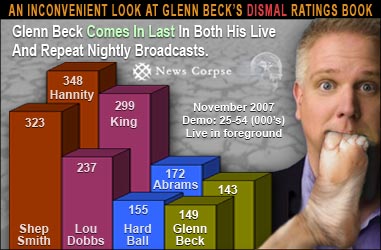 As shown here, Beck loses to all of his competitors in cable news. Both his live show and his repeat come in 4th out of four programs. That doesn’t leave much for him to brag about.

But that’s not the end of his problems. While Beck is unable to challenge his competition, he is also the weakest link on his own network. 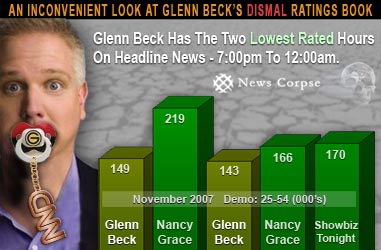 On this chart you can see that the two lowest rated hours on Headline News belong to Beck. He is a TV anchor who is performing like a ship’s anchor and weighing down the network’s line-up.

This is not a case of Headline News being a less widely distributed network. Both Nancy Grace and Showbiz Tonight would either beat or play competitively against MSNBC’s schedule. Grace would even threaten CNN’s Lou Dobbs were she in the time slot.

These numbers demonstrate an inherent weakness that is specific to Beck. This is confirmed by looking at his year-to-year performance which is virtually flat. Beck’s audience in the demo for November 2006 was 148K (live) and 142K (repeat). That is essentially unchanged for 2007. For the same time period Grace’s numbers improved 20% (live), and 15% (repeat). Showbiz Tonight added 34% over their 2006 showing. So Beck is not only the poorest performer against his competition, he cannot even keep up with the growth on his own network.

It is also notable that Beck’s unpopularity seems to be confined to his television persona. In other media he is still a figure to be reckoned with. He is a top five talk radio host (last month he re-signed with Premiere Networks for $50 million) and he currently has a book on the New York Times Bestseller list. He certainly has fans who are able to find and consume his products elsewhere. So the fact that Beck can’t parlay his other media successes into something better than a washout on TV illustrates just how deeply unappealing he is as a television personality. 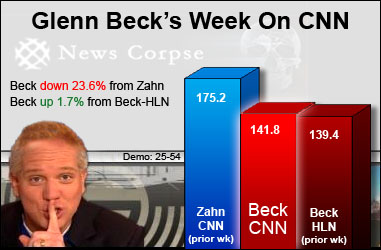 For more evidence of this you just need to look back at the week Beck filled in for Paula Zahn last July. Despite moving up to CNN from Headline News, Beck barely scraped up the viewers he routinely got at his less-watched network home, Headline News. And he underperformed Zahn, who was canceled for poor ratings, by a whopping 23%

Clearly Beck has not lived up to the expectations CNN expressed when they hired him. And his performance over time suggests that there is not much reason to believe that he will improve. A responsible programmer would be seeking to cut their losses. And it’s not as if they don’t have a broad variety of AAA players that could be called up: Ed Schultz, Randi Rhodes, Thom Hartmann, Rachel Maddow, Stephanie Miller, Sam Seder, Taylor Marsh, Jim Hightower, Laura Flanders, Harry Shearer, or any other of the many distinguished progressive commentators. They could even draft their own Jack Cafferty who has developed a cult following on The Situation Room with Wolf Blitzer.

You would think that the programming honchos at the network would be furiously grooming Beck’s replacement. Why wouldn’t they? They can’t blame Beck’s subterranean ratings on a generalized lack of interest because Beck excels in other media markets. They can’t be holding out for a sudden audience surge because there’s been no evidence of him connecting on that level in the past. They can’t believe that a racist, uninformed, arrogant host with a juvenile sense of humor is the next big thing in broadcasting because Fox News already has that market cornered and their ratings are sinking like a stone. And somebody at CNN must surely have noticed the soaring ascendancy of Keith Olbermann’s Countdown on MSNBC. It’s also worth noting that Dan Abrams’ new program, retooled to take a more aggressively honest approach to the news, is kicking Beck’s butt even though it is only a few weeks old.

So what is CNN waiting for? Are they masochistic gluttons for punishment who get pleasure from losing? Are they married to the repulsive and repudiated ideology spewed by Beck? Are they frightened, ineffectual, corporate bootlickers who couldn’t make a proper programming decision without a sackful of surveys and permission from their supervisor? It is just this simple: There is no business case for keeping Beck on the air. His program is a money pit and it’s fiscally harmful to the programs adjacent to it and, therefore, the network as a whole.

The only reason to give Beck a stay of execution would be fealty to the brand of caveman conservatism that he espouses. If CNN doesn’t cancel this stinker they will have settled, once and for all, the speculation as to whether they are a compromised media lapdog with an agenda aimed at placating the powerful and debasing journalism.