A couple of days ago President Obama spoke at a town hall in Los Angeles to a group of young, tech entrepreneurs. His prepared remarks enumerated some of the economic and social successes of his administration. But he also took questions from the audience, including some that led into a bit of politics.

In one particularly notable exchange, the President observed a serious flaw in the devolution of the Republican Party.The question addressed ways “to encourage more immigrants with technical skills to be able to work legally in the United States?” Obama responded at length about the numerous contributions of immigrants to America. Then he wondered aloud about the Republican Party’s hostility to people and policies that the nation needs to progress.

“it’s anybody’s guess how Republicans are thinking about this. If they were thinking long term politically, it is suicide for them not to do this. Because the demographics of the country are such where you are going to lose an entire generation of immigrants who are looking around and saying, you know what, that party does not seem to care much about me and my life. And I think the smarter Republicans understand this. Short term, though, they’ve got a problem, and the Tea Party and others who oftentimes express virulently anti-immigrant sentiment.” 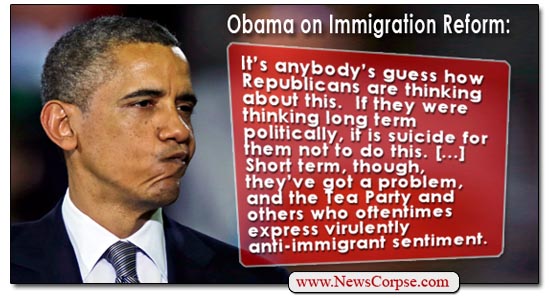 By facing head-on the inherent racism of the Tea Party (which is really just another faction within the GOP). Obama has embraced an observation that has been all too apparent to anyone paying attention, but often was left unsaid. Earlier this year News Corpse documented the overt racism infecting the right-wing after Fox News asked for some evidence of it. 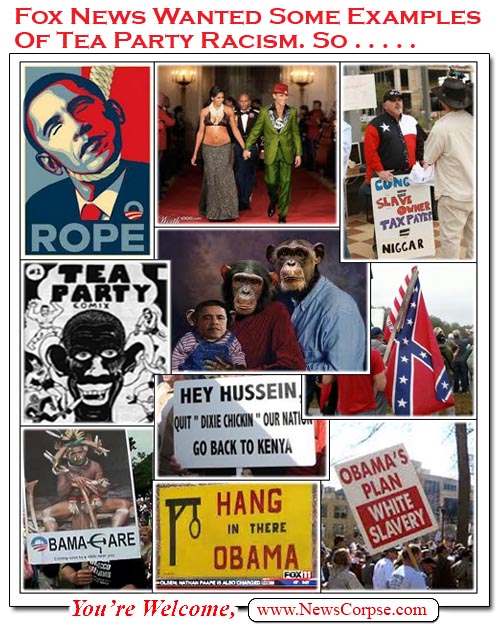 But that wasn’t the only hit the Tea Party took that day. During a gubernatorial debate in Connecticut, the GOP candidate alluded to an article that criticized Democratic incumbent Dannel Malloy. This prompted Malloy to provide more information about the publisher of the article saying…

“The publication you’re talking about is a right-wing tea bag organization. You know it. I let you repeat the same story twice. Why don’t you tell the whole story when you tell stories?”

That accurate characterization set off yelps of hurt feeling by right-wingers, including those at the rag in question, the National Review. Contributing editor Jim Geraghty complained in a tweet…

“Remember when ‘Tea Bag’ was considered an obnoxious thing to say? Can I call the governor of Connecticut a ‘Left-tard’ now?”

Of course, the right has been using derogatory language against the left freely for years. This may be the first time they asked for permission. The NR’s publisher, Jack Fowler, joined in the whine-fest with a column condemning Malloy’s use of the Tea Bag label. However, what all of these crybabies forget is that Teabagging was a term that was originally adopted and promoted by the Tea Party. Even an article in the National Review, dating back to December of 2009, affirmed the term’s derivation saying…

“The first big day for this movement was Tax Day, April 15. And organizers had a gimmick. They asked people to send a tea bag to the Oval Office. One of the exhortations was ‘Tea Bag the Fools in D.C.’ A protester was spotted with a sign saying, ‘Tea Bag the Liberal Dems Before They Tea Bag You.’ So, conservatives started it: started with this terminology. But others ran with it and ran with it.”

And that’s not all. The dean of rightist commentators on Fox News, Charles Krauthammer, referred to “tea bag demonstrations” during a segment of the network’s signature news hour, Special Report, back in October of 2009. Fox’s Tea Party correspondent, Griff Jenkins, who actually rode around on the Tea Party Express bus for the summer, was also known to use the term. But the most blatant embrace of the terminology came in the form of a slickly produced video that proudly declared “I’m proud to be a Teabagger.” It consisted of a variety of allegedly average Americans taking the pledge of pride in the term.

Consequently, it’s somewhat disingenuous of them to feign outrage when somebody utters the words to which they previously swore allegiance. The Tea Party owns Teabagging, but what’s worse is that they own the racism and ugliness that has been a hallmark of their movement. And as the President said, it is political suicide given the demographic changes that are taking place in the country. Without significant reforms, it is only a matter of time before those changes engulf the GOP and make it an irrelevant footnote in future elections.