Now that the midterms are out of the way, Fox News can concentrate on the 2016 presidential race, and that means relentless and asinine criticisms of prospective Democratic candidate Hillary Clinton. In fact, the obsessive bashing has already begun with Fox pulling sentence fragments out of context and making fun of her laugh. And now they are raising an issue that is certain to register with their overwhelmingly elderly audience: Millennials Have No Idea Hillary Clinton Is Old. 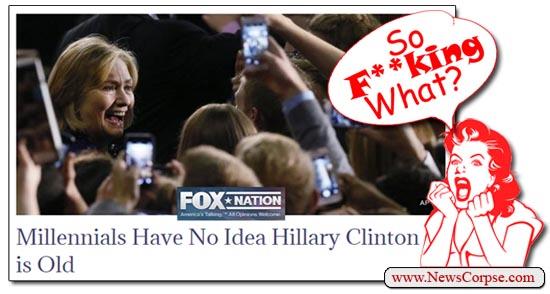 For more brazen lies from Fox…
Get the acclaimed ebook Fox Nation vs. Reality. Available now at Amazon.

That’s right, Fox News thinks it’s important to know that young Americans don’t know how old Clinton is. And the reason they find significance in this is…Oh, who the hell knows. Perhaps they think that young voters won’t support a 67 year old candidate. But if that’s true they would also have to dispense with many Republicans who are even older than Clinton, including the new Senate Majority Leader, Mitch McConnell.

This is an insult to every senior citizen in the country. There is a distinct odor of ageism in it that compliments Fox’s racism, jingoism, homophobia, and other assorted flavors of bigotry. What other purpose could there be for making an issue of this rather bland factoid?

The article that Fox published on their lie-riddled Fox Nation website was sourced to the uber-rightist Daily Caller, which happens to be run by Fox News host Tucker Carlson. in the piece it is reported that “a new Pew Research poll” found that only 27% of 18-29 year olds were able to correctly say Clinton is in her sixties. On the surface that would seem to be flattering to Clinton who appears younger than her years. But Fox wants to make sure it is seen as an insult.

However, digging a little deeper and you find that this isn’t a new poll at all. Pew published this data back in March as part of a larger survey that also showed the public as generally supportive of Clinton. She was viewed by majorities as being tough, honest, and a plurality thought that this old broad has new ideas.

This isn’t the first time that Fox has gone after Clinton based on her age. Earlier this year Fox contributor Karl Rove lashed out at Clinton saying…

Exactly, You don’t want something old and stale like Ronald Reagan who was older than Clinton when he took office. You don’t people like Fox News viewers whose average age is 69 years old. You don’t want people who have a past filled with experience. If you’re Fox News you just want people whose thinking is from the past. You want youngsters like Rand Paul and Ted Cruz who oppose civil rights and voting rights and women’s rights, and who advocate economic policies that favor the wealthy and were responsible for the worst recession in nearly a hundred years.

And finally, if you’re Fox News you have no problem insulting the largest demographic group that makes up your audience, not to mention the most reliable voting bloc among the citizenry. Nice work, Fox. Keep it up. You have just demonstrated that you hate senior citizens and you think Millennials are stupid.

7 thoughts on “So F**KING What: Hillary Clinton Is OLD And Fox News Wants You To Know It”