You may have thought that you’ve seen it all, but when it comes to overt expressions of rancid hatred today’s Republican politicians and pundits are just getting started. It’s apparently not enough that they have spent the last six years breaking all records for partisan obstructionism and openly displayed racist attitudes toward President Obama. Now there is talk of implementing a Jim Crow style admittance policy on Capitol Hill. 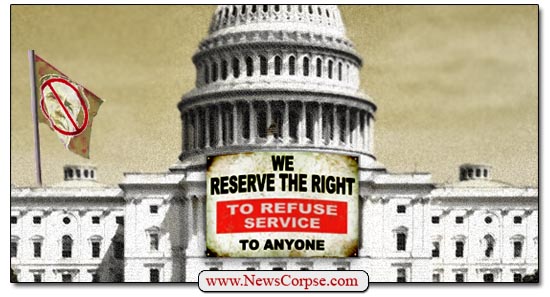 President Obama has recently taken legal measures to make some progress on the immigration reforms that Congress is too inept to address. His executive actions are both constitutionally sound and overwhelmingly popular. Those facts must have driven the Republican Party into an acute psychosis that has them panting feverishly as they struggle to respond. To date they have proposed such over-the-top remedies as rejecting every administration nominee for cabinet or judgeship posts, shutting down the federal government, suing the President, and even launching impeachment proceedings.

Now, however, they have lit on a new tactic that is stretching the limits of sanity. There is boomlet of commentary on the right that thinks it would be a good idea to prohibit President Obama from delivering the annual State of the Union address to members of Congress. This is a proposal that reeks of personal animosity and is wholly inconsistent with the mission of Congress. What’s more, it certainly doesn’t advance the spirit of cooperation that the GOP pretended to embrace following the midterm election. The very words used by the advocates of this plan illustrate their divisive intent. For instance…

Joel Pollak, Breitbart News: Congress should indicate to President Obama that his presence is not welcome on Capitol Hill as long as his “executive amnesty” remains in place. The gesture would, no doubt, be perceived as rude, but it is appropriate.

Rich Lowry, National Review: If I were John Boehner I’d say to the president: “Send us your State of the Union in writing. You’re not welcome in our chamber.”

“Our chamber?” Are these miscreants suffering from the delusion that the houses of Congress belong to them and they have the tyrannical authority to deny admittance to anyone they choose, including the Commander in Chief? This would be an unprecedented rebuke aimed at the nation’s first African-American president. There is a stink of bigotry that is reminiscent of the segregationist South where blacks were not permitted into establishments reserved for whites only. These suggestions are shameless in their open disrespect for both the President and the presidency. No other White House occupant has suffered this sort of indignity. Even President Clinton’s State of the Union speeches went on as scheduled while Congress was trying at the time to impeach him.

Obama’s crime is that he is actually trying to get things done despite a congressional body that holds the title for being the least productive congress in history. They have demonstrated their obsession with opposing anything this President advocates, even legislation that their own GOP colleagues drafted. Once Obama signs on they turn and run, pretending not to have ever had anything to do with it. The most important thing to this Republican caucus is to do as much harm to the President as possible without consideration to the harm they are doing to the country.

But with all of the flagrantly hostile behavior directed at Obama from the right, there is something far more repugnant in this exclusionary gimmick that treats the President as if he were untouchable and unclean and unfit for keeping company with the oh-so-distinguished members of Congress.

Calmer heads may ultimately prevail in the weeks before the State of the Union. But if the GOP wants to proceed with this lunatic plan they do so at their own peril. It would surely be seen by the American people as vindictive and childish. It would be repudiated by a broad majority of clear thinking citizens. The Republican Party would bear the brunt of the backlash that would almost certainly ensue.

Consequently, I say “Go for it, Republicans.” Hang a big, bright “Whites Only” sign over the front door of the Congress. It will serve as a truth-in-advertising notice for the GOP. Then the President can move the speech to an auditorium where he invites all Americans (with the exception of Republican members of Congress) to hear his address. Let the media cover the speech without the predictable and orchestrated jeers and cheers that come from a legislative body that is bitterly divided by partisanship.

Come to think of it, having the State of the Union delivered outside of Congress may be such a good idea that Obama should consider taking the lead. He could preempt the GOP’s rebuke by rebuking them first with a notice that he will not be attending their soiree. There is nothing preventing a president from delivering the speech at a venue of his choosing. And if it results in a more respectful environment where he doesn’t have to deal with petulant hecklers shouting “You lie,” in the middle of his remarks, it may be worth it.

10 thoughts on “The Hate Of The Union Address: Right-Wing Nutjobs Want To Ban Obama From Congress”