Earlier this year Fox News fortified their rabidly right-wing roster of Republican PR flacks by hiring Roger Stone, a veteran GOP dirty trickster and notorious Clinton hater. Stone cut his teeth in the nastiest campaigns of Richard Nixon and in 2008 he founded a group to oppose Hillary Clinton’s primary campaign that he called “Citizens United Not Timid,” or C.U.N.T. He said that the group’s mission was “to educate the American public about what Hillary Clinton really is.” 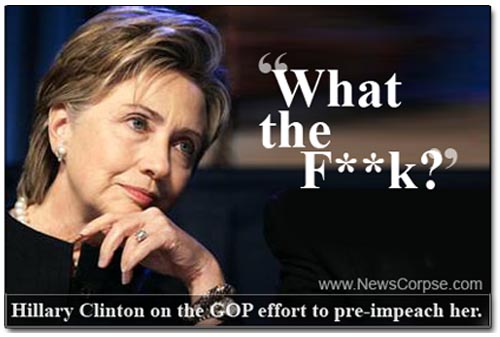 Well, Fox is getting their money’s worth as Stone makes appearances on the “news” network spewing outrageous allegations and vile insinuations that set the bar for decency at new lows. Last week Stone visited the Kurvy Kouch Potatoes at Fox & Friends (video below) to hurl his trademark insults and innuendo. He was asked by Elizabeth Hasselbeck for some “insight with Hillary Clinton’s relationship with Wall Street.” Stone’s answer began predictably by asserting that it “causes her real problems.” Of course, if she had no relationship with Wall Street that would also be a problem. Fox is hard-wired so that anything that happens, or doesn’t happen, is a problem for Democrats. But then he swerved to inject an unrelated criticism from far-right field.

“Frankly, the much greater issue is the new public Bill Cosby scandal, which is gonna cause a reexamination of the problems of Bill Clinton and what Hillary knew about those actions and what she did to suppress them. So I think the Bill Cosby issue, as it were, could be a real problem for Bill Clinton and, therefore, for Hillary Clinton.”

Yes. That’s “the much greater issue.” A twenty year old incident of marital infidelity that is in no way analogous to Bill Cosby. Clinton’s affairs were consensual and, by all accounts, they stopped twenty years ago. You can be sure that if he were fooling around now some tabloid would have uncovered it. The notion that the Cosby controversy would spark a reexamination of Bill Clinton exists only in Stone’s perverted mind. Nobody cares about any of that, as evidenced by Clinton’s high approval ratings. If anything, it would be a reminder that the Clintons worked through their difficulties and preserved their marriage, affirming their family values.

The fact that Fox News employs a despicable character like Stone is proof that they have no interest in ethical journalism. But he is only the tip of the viceberg. Fox’s cast of characterless mudslingers include Karl Rove, who said that Clinton is too “old and stale” for America; Dinesh D’Souza, who said that the young Clinton looks like a hippy (and young Obama looks like a thug); Edward Klein who thinks that Chelsea Clinton was the spawn of Bill after raping his lesbian wife, Hillary. If there is anyone who still thinks that Fox News is either fair or balanced they had better seek professional help and massive quantities of medication as quickly as possible.

For mor documented examples of WTF moments by Fox…
Get the acclaimed ebook Fox Nation vs. Reality. Available now at Amazon.