One month ago a distinct minority of the nation’s voters trudged to the polls to elect just enough Tea Party Republicans to gain control of the Senate and join their GOP colleagues in the House in a ritual of Obama bashing and avoiding doing any actual work. Since then the party of “NO” has already demonstrated their determination to hogtie this president and throw a monkey wrench into the administration of government. 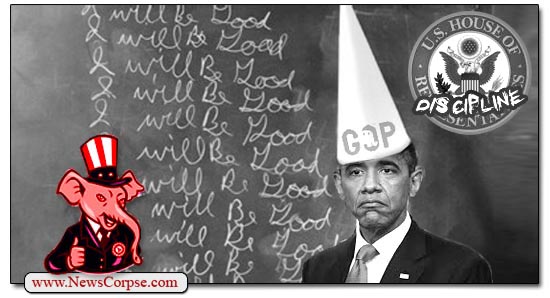 To illustrate just how absurd the right-wing has become, take a look at these actual proposals, as reported by the Wall Street Journal, for responding to Obama’s executive action to reform immigration policy:

Shut down the government. A tactic that failed miserably last year and made a laughing stock of Ted Cruz and other Republicans.
Block ambassador nominations. Because degrading international diplomacy would secure America’s borders.
Block executive branch nominees — just about all of them. Another attempt by the party that hates government to prove that it doesn’t work by sabotaging it.
Ground the president. Seriously? They want to cut funding for Air Force One to keep Obama stuck in Washington.
Start the immigration fight earlier. As opposed to starting to resolve the immigration problem.
File a lawsuit. Which they have already done and will solve nothing. It probably won’t even get to trial before becoming moot.
Cancel the State of the Union. This idiotic and bigoted idea was covered previously by News Corpse here: Hate of the Union.

These inane, retaliatory responses to a serious problem facing the nation reveal the deliberately injurious motives of the GOP. They obviously couldn’t care less about advancing the interests of the American people. The only thing on their agenda is beating on the current resident of the White House whom they never believed was legitimate.

And it makes it all the more ludicrous considering they have a quick and simple way to do away with the executive order they profess to oppose. As reported here before, all they have to do is pass a law. They don’t even have to write one. It already exists and was passed by a bipartisan majority in the Senate. If John Boehner would allow it to be voted on in the House it would pass tomorrow, be signed by the President and – poof – no executive action.

Instead these cretins maneuver to lock Obama out of the Capital and take away his keys to Air Force One. Next thing you know they will be passing legislation to make him sit in the corner for the remainder of his term. And they want people to take them seriously?

3 thoughts on “So How Nuts Are The Anti-Immigration Tea Party Republicans?”