Laura Ingraham is a Fox News contributor and frequent guest host for Bill O’Reilly. Her deep-seated, ultra-conservative views are embraced by right-wingers in media and politics. So it is not surprising that her commentaries are riddled with falsehoods and rife with animosity. For example, in response to the the Eric Garner tragedy, she recently made an asinine suggestion that President Obama be fitted with a body camera. Apparently she believes that the activities of all African-Americans should be monitored at all times.

However, Ingraham may have just exceeded her previous threshold for lunatic declarations when she told a listener to her radio program not to expect conservatives to hit the streets in protest of Obama’s reign of tyranny:

Ingraham: I don’t think our people go in the streets. You know why? Because our people are working and they have to support families. We don’t do that. We don’t protest. That’s just not in the DNA of conservatives. We don’t really protest.

First of all, let’s not ignore that Ingraham just insulted every American who ever participated in democracy by attending a protest. She regards everyone who marched with Martin Luther King as unemployed vagrants who abandoned their families. She believes that anyone who stood up to oppose unlawful wars, or the poisoning of our planet, or gross miscarriages of justice, or any number of other social ills, as lacking responsibility and values. She doesn’t understand that protests are an expression of American ideals and an exercise of freedom.

What’s worse is that Ingraham seems to have lost all touch with reality? Her assertion that conservatives don’t protest makes one wonder who it was hollering at all those town halls a few years ago. Who was it that showed up for the Fox News sponsored, anti-tax Tea Party rallies dressed in Revolutionary War era costumes and carrying confederate flags? Who was it hoisting those signs that demanded that government keep its hands off of Medicare during the ObamaCare protests? Oh yeah … it was conservatives. And not just random right-wingers either. It was Laura Ingraham herself. 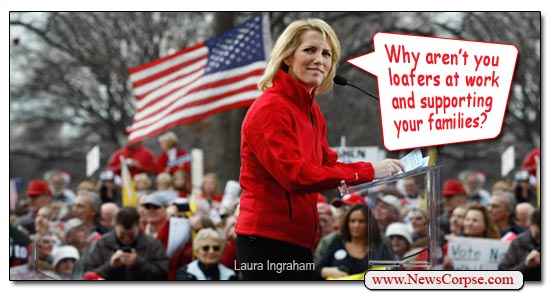 Yes, that is Ms. Ingraham at a rally to oppose ObamaCare in Washington, D.C. Apparently she is giving a speech to a crowd of unemployed family-haters. Ironically, Ingraham and her audience are actually attempting to harm families by preventing them from getting affordable health insurance. They are demonstrating against a reform that allows parents to keep their children on their policies longer. They are pushing to permit insurance companies to decline coverage to anyone with a preexisting condition. That is not exactly an agenda that speaks to supporting families.

Ingraham needs to apologize to everyone who has made personal sacrifices in order to petition their government for redress of grievances (look it up Laura. It’s in the Constitution). She especially needs to address those on her own side who must be wondering what the hell she’s talking about. And she may want to see a medical professional herself to inquire as to her apparent amnesia. Lucky for her, it’s covered by ObamaCare.