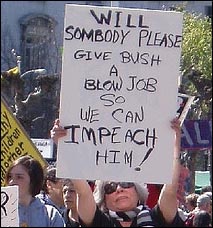 For the past six years, America has endured the incompetence, corruption, dishonesty, greed, criminality and ruinous hostility, of the Bush regime. And through it all, it has been a promethean undertaking to exact even a modicum of accountability. The blame for that rests with both an administration that has no capacity for shame, and a media that wallows in it.

While atrocities in the form of wars, deficits, hurricanes, environmental devastation, and Constitutional collapse, were raging, it was all but impossible to focus media attention on the perpetrators. If Bush and his cronies were not subject to impeachment for these litanies of failure, then what needs to transpire before the press will take notice?

The affairs of Mark Foley have brought to life the bumper-sticker satire displayed above: “Will somebody please give Bush a blow job so we can impeach him.” Now that prurient interests are aroused, the media is employing wall-to-wall coverage of an issue that, while important, pales in contrast to some other topical stories. Stories like 14 more American deaths in Iraq; Congress legislating away habeas corpus; or more revelations that Condi Rice ignored warnings on al Qaeda prior to 9/11.

But hey, we have no room for stories like those when a congressman is fiddling with little boys on the Internet. At least the media now has what it craves and we can get on with the business of celebrating scandals. Control of Congress may be in the balance. Not because they have produced the largest deficit in history or for their rubberstamping of the White House’s abuse of traditional freedoms, but because one of their members is a pervert.

This is what it takes to foment change in America. This is what the press yearns for. If somebody isn’t getting off, the story isn’t getting covered. Lies about weapons of mass destruction that launch a war of aggression that murders 100,000 innocent people won’t do the trick. But turning a trick will. This may not be the most dignified or democratic way to transfer power, but at this stage of the game, I’ll take what I can get.