Here it is. To absolutely no one’s surprise, Hillary Clinton announced that she is running for President of the United States of America with a video (below) that features a cross section of Americans engaged in readying themselves for a variety of life’s challenges.

The launching of the campaign comes after weeks of the sort of teasing that every candidate does prior to making their candidacy official. It also comes after weeks (years) of vitriol from Republican pundits and politicians determined to turn Clinton into a comic book villain who aspires to thrust the world into darkness. That isn’t hyperbole. Just yesterday at the NRA’s annual conference, Wayne LaPierre literally made that charge saying that “Hillary Rodham Clinton will bring a permanent darkness of deceit and despair forced upon the American people to endure.”

Recalling all of the predictions of doom and gloom spewed by Republicans alleging that President Obama was the harbinger of the Apocalypse, it hardly seems newsworthy to note that they are just as adamant, and delusional, about Clinton’s alleged desire for the decline of western civilization. You can almost hear Senate Republican Leader Mitch McConnell paraphrasing himself with regard to making Obama a one-term president.” 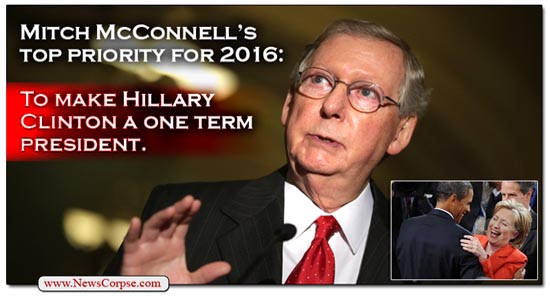 That legislative strategy did not work out very well for the Republican Party. Nor did the relentless fear mongering about how Obama’s policies would kill jobs, tank the economy, abolish liberty, increase domestic terrorism, and generally destroy America. Those thunderous accusations landed with a resounding squeak that culminated with former Vice-President Dick Cheney declaring that Obama was “the worst president in my lifetime without question.” He obviously forget his former boss, as well as all of the facts.

Republicans aren’t wasting any time tarring Clinton with the same brush. This is a trend that started long ago. In fact, two years ago News Corpse reported that the GOP had already begun their campaign to “Impeach Hillary” way before the election, or even any campaigning. Republicans are so terrified of Hillary Clinton that they are promoting Elizabeth Warren and Bernie Sanders.

As for Clinton, she appears to be taking a more populist tone than last time around. Her focus on middle class citizens working hard to manage the important things in life – family, career, community, security – will put her in good standing with average Americans. She emphasized that her campaign would be about people, not herself. That was the overarching theme of the video in which she doesn’t even appear until two-thirds of the way through. And when she does appear she advances that theme saying that…

“Americans have fought their way back from tough economic times, but the deck is still stacked in favor of those at the top. Everyday Americans need a champion, and I want to be that champion.”

In order for her to follow through on that, she will have put some distance between herself and the big money interests with which she has long been associated. She will have to work for stricter banking regulations that prohibit them from ever again becoming “too big to fail.” She will have to pursue policies that correct the imbalances that have produced the worst economic inequality in history. She will have to support efforts to get money out politics. In short, she will have to appeal to the Elizabeth Warren wing of the Democratic Party. We’ll see how that plays out.

In the meantime Rand Paul, Rick Santorum, Jeb Bush, Ted Cruz, and the Republican National Committee, have already released rebuttal videos making predictably venomous criticisms of Clinton. Paul may have won the Dipshit Award for Political Hackery with his laughably lame anti-Hillary store on his website. Don’t miss the limited edition, non-functional, Hillary Clinton hard drive he is selling to his idiot supporters for $100.00. Did I mention that it is non-functional? That’s the Republican Party for you, and it’s emblematic of their economic doctrine: Shell out lots of money for shit that don’t work. This is gonna be a fun campaign.