In the days that have transpired since Hillary Clinton made her official announcement that she is running for president, the media has fallen all over itself trying to get some sort of scoop. Since Clinton opted not to invite the press along on a road trip, they have resorted to frantically trying to chase her down like a pack of paparazzi. It has been an embarrassing series of not particularly newsworthy events culminating in a wholly unremarkable appearance at an Ohio Chipotle franchise that even the Daily Show’s Jon Stewart saw fit to ridicule.

Many conservative commentators pounced on Clinton’s decision to focus on conversations with small groups of voters rather than making a splashy, staged speech before hundreds of predictably cheering supporters (as did Ted Cruz, Rand Paul, and Marco Rubio). They derided the strategy of taking a van ride across the country as an attempt to dodge the press. For example, Elisabeth Hasselbeck of Fox News complained that “It’s hard to be transparent in that secret-mobile driving around.” There was a general consensus among the rightist pundit posse that Clinton was either afraid or up to no good.

Funny, that isn’t the way they felt about Sarah Palin’s bus tour in 2011 that deliberately kept a secret itinerary to confound the lamestream media. It isn’t how Palin felt about it either. In fact, she is now bragging that the whole concept was her idea. and that Clinton has ripped it off. 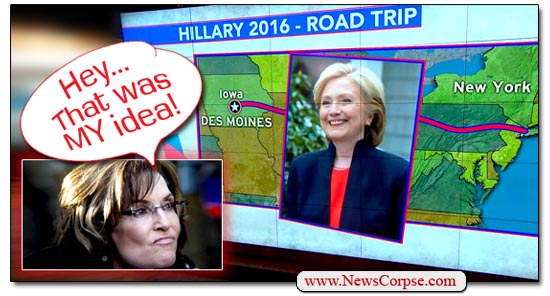 This isn’t the first time that Palin was cited as the creator of the political bus tour. When Obama planned a bus campaign trip in 2011, Fox News published an article on their Fox Nation website claiming that he was copying Palin. However, in a bit of epic absurdity, the photo that Fox included was one that showed Obama on a campaign bus three years before Palin got aboard one. That’s right, their own photo, with a dated poster in the bus window, proved they were lying.

So now Palin has posted on her Facebook page for the first time in two weeks. In that time she has neglected to comment on all of the political activity in her party with three presidential candidates declaring. She hasn’t mentioned the U.S./Iran nuclear agreement. She’s made no comment on the police killings of more unarmed African-Americans. She’s had nothing to say about Indiana’s pro-discrimination law. But now she has come out of seclusion to take credit for Clinton’s road trip. Priorities.

In her Facebook message, Palin included a video (below) that showed how the press was confounded by her little bus-capade. She also made a point of misrepresenting her own travels. She claimed it was a national excursion with “reminders of what makes our nation exceptional and free!”

Palin: From way up North in the natural resource-rich state of Alaska down to the inspirational, loud and patriotic Rolling Thunder Rally in DC to a calm clambake on a cool New Hampshire night.

The truth is that Palin’s trip began in Washington, D.C., not Alaska. It lasted for all of six days and never made off of the East coast. When asked why it ended so prematurely, Palin lied again, saying that she had been called back to Alaska for jury duty. That, of course, was not true. She ended up going to Iowa for the premiere of a documentary film about her, “The Undefeated.” The whole bus trip was a fraud that was designed to make people (especially the press) think that she was a potential candidate for the GOP nomination for president in 2012. The reality is that it was set up to keep her name in the news as she promoted the movie that ultimately bombed at the box office.

To make matters worse, she wasn’t even on the bus. She traveled by jet between stops and met the bus at each destination. And as for the appearance at the Rolling Thunder rally, she was not a welcome guest. See this video for a more accurate representation of her attempt to crash the annual charity event for her own selfish benefit.

This is the life of a grifter. Sarah Palin’s whole career is aimed at splashing herself with glory while filling her bank accounts with the cash of rubes. Lucky for her there is an oversupply of them in the Republican/Tea Party that is anxious to throw their money at dimwitted figureheads.