In October of 2010, Fox News launched the Fox News Latino website in order to mitigate the massive disadvantage Republicans faced with Latino voters. Latinos are the fastest growing demographic in the nation and their voting power is increasing with each election. So even though the Republican Party has been alienating this constituency with blatantly detrimental policies, Fox News was determined to try to save the GOP from its own prejudices.

The Fox News Latino site has been used as the dumping grounds for stories that Fox News was uncomfortable with presenting to their 99% white audience. So it is common to see Fox sequester stories with ethnic themes on the Latino site so they can avoid offending their much larger audience on the Fox News mothership. News Corpse has documented numerous examples of this, and here are just a few.

In another twist on this journalistic fraud, Fox News published an article that exposed Ted Cruz and Marco Rubio as a couple of the Senate’s biggest truants. Despite the fact that they are both in their first terms, they have missed more votes and/or committee hearings than most of their colleagues. 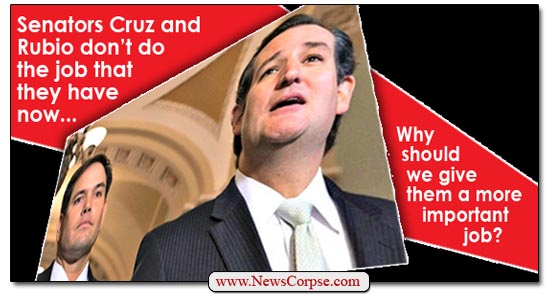 Just today, Cruz gave a venomous condemnation of Attorney General nominee Loretta Lynch and the importance of voting against her, then skipped out without voting. [Lynch was confirmed 56 to 43] So it’s interesting that these freshmen senators are currently among the leading candidates for the GOP nomination for president.

Not only are they lacking the most basic qualifications for the job they seek (particularly from the Republican perspective that claimed President Obama was unqualified), but they haven’t even been doing the job that represents their only plausible qualification. What they’ve been doing, of course, is running for president. But maybe they should have acquired some experience first, or at least done some work in their current jobs.

The story revealing the poor attendance records of Cruz and Rubio was prominently displayed on the Fox News Latino web site. However, Fox News didn’t bother to report it either on the air or online. With this strategy Fox can say that they covered the story somewhere, but they don’t wind up giving a great deal of negative exposure that might cause electoral headaches for their Republican pals. Especially those who are favorites of the far-right, Tea Party contingent that makes up most of the Fox audience.

There is no valid argument for restricting this story to just the Latino website. While Cruz and Rubio obviously share a heritage that is relevant to the site, their position in a national campaign makes this news relevant to the whole nation. Apparently Fox News doesn’t want the nation to know about this, so it’s downgraded to an ethnic niche site that most of their audience will never see.

Imagine if Fox News had only reported stories about Obama in 2008 on a separate African-American website. What Fox is doing is dishonest and racist. It is a disservice to their audience and a corruption of journalism. In other words, it is business as usual at Fox News.