Anyone who thought that Hillary Clinton’s road to the White House was going to be littered with trash from the GOP’s Benghazi obsession or frenzied raving about ghost emails may be disappointed to learn that there appears to be a new scandalette brewing on the right flank. The campaign by Republicans and conservative media to denigrate Clinton seems to be coalescing around a single bit of pre-fab fluff that reveals the flimsy foundation of their strategy. 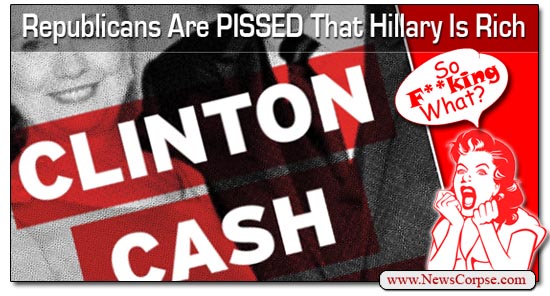 The issue that the right is settling on is Clinton’s net worth and whether her personal wealth conflicts with her campaign theme of being a “champion for the middle-class.” The GOP attack claims that Clinton is a hypocrite for advocating support for everyday Americans when she herself is a member of the one-percent.

Think about that for a minute. This is the same Republican Party that has been the billionaires best friend, pushing through favorable tax schemes, eliminating regulations, and always pressing for an unfettered free-market approach to economic policy. It’s the same Republican Party that praises entrepreneurship and the dignity of compiling vast amounts of personal wealth. However, when it comes to Clinton, there is suddenly an implication by the right that getting rich is bad and if you do so you cannot speak up for hard working citizens who are not as fortunate.

There is no way to respond to that other than by saying “What the fuck are you talking about?” There have many examples of wealthy public servants who genuinely fought for the welfare of the poor and middle classes. The Roosevelts and the Kennedys come to mind without much of a mental struggle. Billionaire investor Warren Buffet has a “rule” named for him that illustrates the unfairness of his tax rate being lower than that of his secretary. There is even a group of “Patriotic Millionaires” who are lobbying for higher taxes on the rich (i.e. themselves).

While the Clintons may be financially blessed today, they were not always so lucky. They both have middle-class roots and they worked their way through college. They never owned their own home until after they left the White House. They may have too many (way too many) associations with Wall Street now, but that was not always the case (and Clinton is moving more toward the Warren Wing of the party every day). So the suggestion that they are unable to relate to common Americans is simply a fabrication.

The problem with the right-wing assault on Clinton is that they simply don’t understand what the issue of income inequality means. They blindly lash out at Clinton for being rich when that isn’t the problem. Nobody cared that Mitt Romney was rich back in 2012. Romney’s problem was that he advocated policies that benefited the rich at the expense of everyone else. He wanted to make the Bush tax cuts permanent. He wanted to cut Social Security and other benefits programs. He opposed raising the minimum wage and attacked the unions that fight on behalf of workers. And he famously dismissed the 47% of the nation that he concluded would never support his candidacy, so to hell with them. If Romney were rich, but also compassionate toward those who are not, his wealth would not have been an issue in the campaign.

The Romney problem is one that permeates the entire Republican Party. There are distinct differences between what I called the Koch Republicans and the Soros Democrats:

“For one thing, the Republican rich can usually be found bankrolling people and projects that benefit them personally or professionally. Thus the Kochs’ fixation on opposing unions and denying climate change is closely aligned with their exploitative and polluting business interests. Well-off Dems, on the other hand, commonly finance more philanthropic endeavors (civil rights, environment, aid to the poor) that aim to improve the quality of life without necessarily enriching themselves.

“It is also notable that conservatives advocate for less regulation of money in politics, creating an environment where the rich get ever more power to bend society to their will. Liberals, conversely, spend more of their cash on trying to remove money from politics. As an example, it was conservatives, including the Kochs, who pushed for Citizens United so that they could fund their self-serving projects without restrictions or even identification. But Jonathan Soros, the son of the right’s favorite wealthy liberal punching bag, George Soros, created the Friends of Democracy PAC, a SuperPAC aimed at ending the influence of SuperPACs.”

Similarly, Clinton has already taken a position in favor of a constitutional amendment reversing the abhorrent Citizen’s United ruling by the plutocracy backers on the Supreme Court. She supports unions and progressive taxation and immigration reform and other policies that inure to the benefit of those who are not already awash in the benefits of our capitalistic society. Consequently, her personal wealth cannot be fairly used as a cudgel to bash her as a hypocrite.

Virtually every candidate for president is either a millionaire or otherwise very well off financially. So the only advocates for the middle and lower classes will, by necessity, be comfortable economically. What makes the difference is how they choose to use their position to make the benefits of the American economy accessible to all. Democrats seek broad-based gains that benefit everyone. Republicans seek to feather their own nests and those of their rich pals. That may be part of the reason that history shows that the American economy performs better under Democratic administrations than Republican.

Every Republican candidate currently being speculated upon as candidates for president in 2016 favor the same failed, trickle-down theories of the past. What this nation needs is a champion for the middle-class. Clinton says she wants to be that. At least she’s saying the right things. We’ll have to wait and see if she comes through. And the wingnut politicians and pundits who are embarrassing themselves by proving that they don’t understand these simple concepts need to shut the fuck up.

10 thoughts on “So F*cking What? Hillary Clinton Is Rich And It Drives Republicans Nuts”