What is it about the extremist wing of the GOP/Tea Party that makes it so compelling to compare their ideological adversaries to Hitler? They can’t seem to have a civil debate about issues with which they disagree without sinking to the most offensive depictions imaginable. And while often this behavior is confined to fringe groups and nut cases, it frequently surfaces among the right’s leaders. 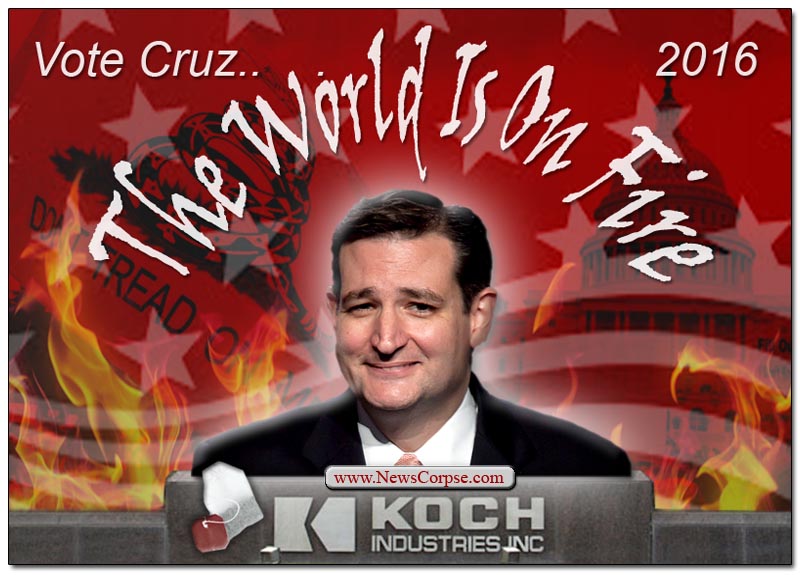 This weekend Ted Cruz spoke at the Iowa Faith and Freedom Coalition meeting and demonstrated just how repulsive the Republican establishment has become. His speech contained allegations that Democrats have “decided there is no room for Christians in today’s Democratic Party.” That may come as a surprise to the tens of millions of devoutly Christian Democrats, including pastors, priests, parishioners, and of course, President Obama (whom the wingnut contingent still thinks is a gay Muslim from Kenya). But that insult to the Christians that Cruz, in his self-appointed ass-holiness, has decided are illegitimate, apparently didn’t go far enough to viciously malign his allegedly fellow believers.

Cruz: There is a liberal fascism that is going after Christian believers. It is heartbreaking, but it is so extreme, it is waking people up. […] Today’s Democratic Party has become so radicalized for legalizing gay marriage in all 50 states that there is no longer any room for religious liberty.

According to Cruz, Democrats are analogous to the Nazi regime that slaughtered millions of innocents and sought to take over much of the civilized world. To Cruz the act of standing up for the rights of all Americans, and opposing the rankest form of discrimination, is no different than torturing and murdering people who were themselves victims of discrimination.

The form of “religious liberty” that Cruz advocates is one that permits people to freely exercise their prejudices in contradiction of the founding principles of this nation that declared that we are all created equal. Cruz would have the nation embrace a practice that makes some more equal than others. He claims to base his hateful opinions on his own warped view of America’s origin.

Cruz: We were founded by men and women fleeing religious persecution. We need leaders who will stand unapologetically in defense of the Judeo-Christian values upon which America was built.”

The absurdity of this statement lies in the fact that Cruz is at once heralding our forebears for having the courage to renounce the bigotry of the British religious tyranny, and in the next breath asserts his own demand for a religious tyranny that he happens to favor. It is a symptom of religious arrogance and supremacy that demeans all who do not submit to his beliefs.

Cruz is also demonstrating his pitifully weak grasp of the Constitution and America’s legal system. While it is true that Democrats as a party are more accepting of marriage equality, it is not the party that is broadening the civil rights of LGBT people. It is the courts who are acting on the principles of the Constitution, you know, the ones that Cruz and his hate mongering zealots profess to cherish.

Cruz and other like-minded bigots argue that civil liberties should be voted on and the majority gets their way. But that has never been the manner by which civil rights have been preserved. If it had been, African-Americans would have been voted against and segregation might still be in effect today. Thankfully, the courts decided that civil liberties may not be subject to public opinion.

However, in Cruz’a world it is permissible to suppress people if a majority says to do so. And if you don’t like that then you are a fascist with designs on genocide. Since Cruz is a member in good standing of the Republican Party, and a leading candidate for their nomination for president, the rest of the GOP field should be asked whether they agree with his condemnation of Democrats. Do they also regard their political foes as equivalent to those responsible for the Holocaust?

Ironically, it is Cruz’s view that has more in common with the repugnant politics that result in discrimination and oppression. Yet he has managed to convince himself that his prejudices are admirable defenses of liberty. That’s a sort of self-delusion that is far too common among right-wing politicos, and even worse, among the many deluded citizens they have fooled into following them.

21 thoughts on “Ted Cruz Goes There: There is A Liberal Fascism That Is Going After Christian Believers”