The repugnant race baiters of the right have made it their mission to define anyone who alleges racism as instigators of civil disorder, promoters of racial division, and, in a display of epic hypocrisy, as racists themselves. It doesn’t matter how obvious the occurrence of bias, it can’t possibly be credible to the bigot apologists who believe that racism ended when valiant white saviors freed the slaves a hundred and fifty years ago. And these racism deniers came out in force following Obama’s appearance at the White House Correspondent’s Dinner. 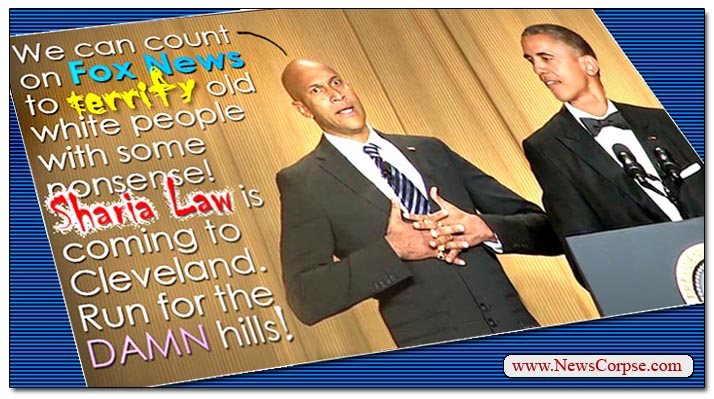 Leading the pack are the hate-mongers on the Fox News community website, Fox Nation, where they recently featured a story about why “We Must Destroy ‘The Black Community'” With a headline like that it hardly matters what the substance of the article says (it argued, wrongly, that there is no need for any communities of commonality), the point is made to an audience that eats up openly hateful messages. They have abandoned their dog whistles for bullhorns.

In a continuance of this ugly messaging, Fox Nation served up another headline reading “If Only President Obama Weren’t Black.” The author is Erick Erickson, one of the most hostile promulgators of prejudice in the media, and a Fox News contributor. The opening paragraph of the article, that is ostensibly a critique of President Obama’s comedy routine at the White House Correspondent’s Dinner, says…

“Over the weekend, most of the worst people in the world gathered together in Washington, D.C. as a circle of jerks to sing each other’s praises. Sadly, there was no Samson to tear down the columns and collapse the roof on the Philistines of Washington. But there was a President of the United States willing to make jokes about the ‘F-word’ and an Imperial Court to worship him.”

The thrust of this article is Erickson’s contention that Obama “assume[s] the opposition to him is because of his race.” But nowhere in the article does Erickson provide evidence that Obama holds that view. The entire premise stems from the part of Obama’s address where Keegan-Michael Key portrays Luther, Obama’s anger translator. It is important to note here that the character is NOT Obama’s “black” anger translator. However, that adjective was inserted by Erickson to color his tirade against the President. It is his attempt to fuel the racist stereotype of the angry black man.

For the rest of the article Erickson rattles off a list of political issues that he asserts are unpopular, and then he infers that Obama regards them as such because of his race. Everything about that is flat out wrong. Many of the issues (e.g. a nuclear deal with Iran, ObamaCare) are not unpopular at all. And to the extent that a minority of Americans may oppose them, Obama has never suggested that their opposition was racially based. That is an invention of the right and of Erickson’s own bigotry. Erickson goes on to declare that…

There’s some more proof of Erickson’s moral superiority and objection to profane incivility. But more to the point, by suggesting that Obama’s perspective would be different if he were not black, Erickson is contradicting his whole premise. He is, in fact, asserting that being black is inherently significant and has a critical impact on the affairs at hand. So his argument that race shouldn’t enter into it is in tatters by his own admission. And, by the way, Erickson’s theory is that Obama would have a much better assessment of the matter if he were white, because, you know…

While Obama himself has not blamed racism for the opposition he has faced for the last six years, it has always been a primary motivator of many of his critics. The birther controversies, the allegations of Muslim faith, the false associations with Black Panthers and other radicals, the talk of reparations, the accusations of treason and complicity with our enemies, and the depictions by Tea Party signs of Obama as an ape or tribal witch doctor, are just a few of the representations that have flooded the anti-Obama mediasphere.

The Fox News racists are so obsessed with the notion of being called out for their racism that they are now inventing occurrences of it. No, the President did not inject racism into this discussion. But yes, his critics, like Erickson are profoundly racist. And the advice that I keep giving them (though they never seem to listen) is: If you don’t like being called a racist, stop being racist. It really is that simple.