Today’s ruling by the Supreme Court upholding the subsidies in the Affordable Care Act (aka ObamaCare) is being portrayed in the media as an historic victory for President Obama. And, to be sure, the ruling does affirm the constitutionality of the law and prevents the cancellation of more than six million health insurance policies nationwide.

However, from a political perspective, the big winners are the Republican Party. Chief Justice John Roberts really pulled their butts out of the fire with his decision finding that…

“In a democracy, the power to make the law rests with those chosen by the people. […] Congress passed the Affordable Care Act to improve health insurance markets, not to destroy them. If at all possible, we must interpret the Act in a way that is consistent with the former, and avoids the latter.”

For the rest of the day, and throughout the 2016 presidential campaign, you will hear the moaning and gnashing of teeth of disingenuous Republicans pretending to be disappointed by the ruling. In fact, they could not be happier. This ruling allows them to run on a platform of repealing what they claim is a disastrous law that curtails all freedoms and sets the course of the nation toward Armageddon. 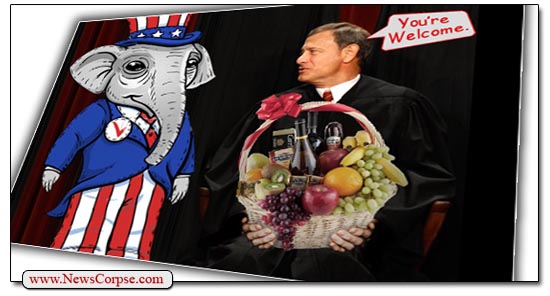 Had the Court ruled against the subsidies, millions of Americans would have lost their health insurance, and the the remainder would have been subject to higher premiums as the pool of the insured became smaller and sicker. In that scenario, Republicans would have had to run the gauntlet of enraged voters who were suffering the consequences of the GOP’s greedy self-interest. Most of those voters would have been from red states and the south where the most recipients of subsidies from federal exchanges reside.

As a result of the this ruling, the GOP will still run on a “repeal and replace” campaign, but they won’t have to do it with their own constituents breathing down their necks in disgust. Instead they will lament the corrupt socialists on the Court and promise to deliver something better if they win the White House and Congress in 2016. Never mind that they have made that promise for more than six years but have never produced a viable replacement. To their credit/shame, they have voted more than fifty times to repeal ObamaCare.

On the other hand, Democrats won the legal and logical battle with this ruling. But they lost the opportunity to run against a Republican Party that had stolen the health insurance from millions of Americans. One of the great ironies of democracy is that it is harder to run on your accomplishments than it is to run on your opponents’ failures. So while millions of voters who were rescued from the heartlessness of the GOP by this ruling should be grateful to Democrats for passing the legislation, their gratitude will be harder to translate into votes than if the Court had struck down the bill and they could vote their disapproval of Republicans.

In the final analysis, it is far better that the Court upheld the subsidies because, politics aside, real people’s real lives hang in the balance. For whatever period of time that ObamaCare may have been obstructed by a negative ruling, Americans would have suffered both financially and medically. Indeed, people without access to health care would have become sicker and even died. And those who survived would have lost much of their financial security, including their homes and retirement savings. So if Democrats have to try harder to get their message across, then so be it.

In light of that, every time you hear a Republican whining about the awful Supreme Court decision, remember these two things: 1) They are actually ecstatic that it takes them off the hook for all the outraged voters who would have lost their insurance had the decision gone the other way. And 2) Their feigned despair is actually an expression of disappointment that millions of people didn’t get shafted and forced to face poor health and bankruptcy, which is what they were ostensibly rooting for.