Harvard University is validating the media analysis of News Corpse. Last year News Corpse published an article that affirmed that Fox News, despite the conventional wisdom, is actually a powerfully destructive force within the conservative political world. The article, “Fox News Is STILL Killing The Republican Party.” examined the results of a survey conducted by the Brookings Institution and the Public Religion Research Institute that compared the views of Republicans who watch Fox News to Republicans who don’t. The conclusions revealed that Fox News Republicans are even more uninformed and extreme in their views than their non-Fox viewing comrades in the same party. That article from last year was itself a follow up to one published by News Corpse six years ago that originally took the position that “Fox News Is Killing The Republican Party.” Back then I wrote that…

“By doubling down on crazy, Fox is driving the center of the Republican Party further down the rabid hole. They are reshaping the party into a more radicalized community of conspiracy nuts. So even as this helps Rupert Murdoch’s bottom line, it is making celebrities of political bottom-feeders. That can’t be good for the long-term prospects of the Republican Party.”

News Corpse was not alone in noticing the detrimental effects of Fox News on the GOP. Bruce Bartlett, a veteran strategist who worked in both the George H.W. Bush and Ronald Reagan White Houses, published a paper titled “How Fox News Changed American Media and Political Dynamics.” The paper’s premise was that Fox News has had a harmful effect on the Republican Party’s electoral appeal by herding its already right-wing flock into an even fringier parish where it is shielded from differing views. He literally (and correctly) accused much of the conservative base of being brainwashed by Fox News and other right-wing media. 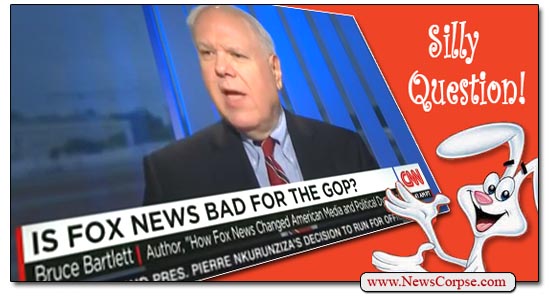 Now a study by Jackie Calmes, a fellow at Harvard’s Shorenstein Center on Media, Politics and Public Policy, has been released that makes some of the same observances of how Fox News, talk radio, and other right-wing media sources are damaging the Republican Party’s ability to either govern or get elected. the study titled “They Don’t Give A Damn About Governing, Conservative Media’s Influence On The Republican Party,” is a lengthy and detailed analysis of the historical and contemporary influences that have shaped conservative politics. It includes interviews with Republican politicians, operatives, and pundits who almost unanimously express their concerns for a party that has lost control to the outer fringes of their most radical rightist wing in the media. The study begins by asserting that “the leaders of the Republican Party are not setting its agenda […] it is conservative media” that represents…

“…an expanding web of ‘news’ sites and social media outlets with financial and ideological alliances with far-right anti-government, anti-establishment groups like Heritage Action, Americans for Prosperity, Club for Growth and FreedomWorks. Once allied with but now increasingly hostile to the Republican hierarchy, conservative media is shaping the party’s agenda in ways that are impeding Republicans’ ability to govern and to win presidential elections.”

The GOP conservatives interviewed for the study (some of whom declined to be identified for fear of retaliation) had opinions that were predominantly negative with regard to the state of affairs in the party. Here are a few examples:

Unnamed Republican: “There’s no incentive to ever really bother with reality […] the loudest voices drown out the sensible ones and there’s no real space to have serious discussions.”

GOP Rep. Tom Cole: While [talk radio is] conservative in its orientation, it’s a financially driven enterprise and market share matters. And playing to the prejudice of their audiences or reinforcing them – as opposed to engaging in enlightened and intellectual debate – is pretty widespread.

Unnamed Republican: Now it seems that so many people are going for the niche, for the red meat, and there are all these outlets where you can do that. It’s playing to the base, but the base doesn’t live in reality. And that’s the problem: It’s taken the party in a really self-destructive direction.

GOP operative John Feehery: “[C]onservative media has become ideologically and financially entwined with the network of no-compromise advocacy groups financed by the Kochs and other right-wing patrons. Together, media and activist groups are part of ‘this conservative-industrial complex that has risen up. And they have a vested interest in failure, not in success.”

The Cato Institute’s Julian Sanchez: “Reality is defined by a multimedia array of interconnected and cross-promoting conservative blogs, radio programs, magazines and of course, Fox News. Whatever conflicts with that reality can be dismissed out of hand because it comes from the liberal media, and is therefore ipso facto not to be trusted.” […And that] “conservative media’s logic had become worryingly untethered from reality as the impetus to satisfy the demand for red meat overtakes any motivation to report accurately.”

Media historian Nicole Hemmer: “We used to say, ‘You’re entitled to your own opinion, but not to your own facts.’ Now we are all entitled to our own facts and conservative media use this right to immerse their audience in a total environment of pseudo-facts and pretend information.”

I couldn’t have said it better myself. Well, actually I could have, and I did last year and five years before that. But at least they are catching up. Unfortunately, even acknowledgment of these problems is not likely to result in a course correction. Particularly after the new paradigm exemplified by the loudmouthed, ignorant, hostility of Donald Trump, who is proving that no matter how abhorrent you are, never apologize or backtrack or show any signs of reasonableness or humility. It is that lesson that forms the greatest obstacle to progress for Republicans. The study confirms this in its concluding paragraphs saying that…

“The unanimity among establishment Republicans – many of them conservatives by the definition of anyone but purists – that rightwing media has become a big problem for the party, and their readiness to talk about it, was something of a surprise to this reporter of three decades’ experience in Washington. Of the establishment Republicans among several dozen conservatives interviewed, nearly all were flummoxed about how to moderate the party. Most expressed despair.”

That despair is not without justification. What was once the “Grand Old Party” is now populated by “Grouchy Obstinate Purists” who represent the “Greedy One Percent.” And there is no sign that any of it is going to improve any time soon. Particularly as long as Fox News is the preeminent media mouthpiece for the right, and they continue to promote nut cases like Trump, Glenn Beck, Sarah Palin, Bill O’Reilly, Sean Hannity, etc.