The science deniers at Fox News have spent years dismissing the claims of environmentalists on matters relating to everything from water and air quality, to endangered species, to clean energy, to climate change. The network has vigorously denounced advocates for reform as propagating hoaxes or having ulterior financial motives. And always at the top of their list of evildoers is the Environmental Protection Agency (EPA). 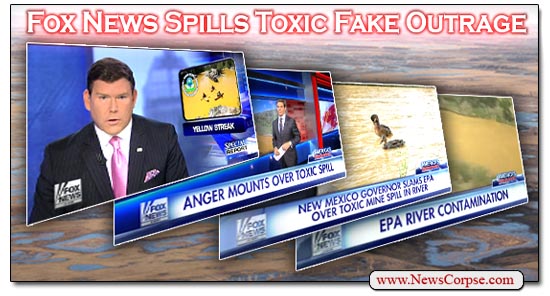 In Colorado last week an EPA crew accidentally breached a debris dam that resulted in a massive flow of arsenic, lead, and other toxins into the Animas River. The crew had been working to repair leaks that were already leaching toxins into the river. It was an unfortunate accident that occurred during a commendable effort to restore the local ecosystem.

However, on Fox News this became a villainous atrocity by pernicious characters who aspire to deliberately destroy America. They have had numerous stories that explicitly and disparagingly cite the EPA’s responsibility for the spill as if it were intentional. Furthermore, they go out of their way to report the outrage of the local victims. What’s interesting about that editorial spin is that they never do the same when it is a corporation that was responsible.

For instance, when a pipeline burst near Williston, North Dakota, Fox didn’t once address the “anger” it may have caused. Instead, they interviewed the pipeline’s owner who gave assurances that everything would be fine. Fox covered another incident in West Virginia the same way. In North Carolina, toxic sludge from a coal ash dump polluted the Dan River, which was already contaminated from a previous spill. There, Fox quoted a Duke Energy spokesperson who downplayed the incident saying that “no immediate action was necessary.”

In story after story Fox declined to criticize the guilty energy companies whose greed created environmental nightmares. They pointedly neglected to advocate for penalties or reform. But in this story, where the EPA is the culprit, Fox repeats their name with noticeable sneers and insists that the agency needs to be reigned in. It is the most disingenuous, hypocritical, and self-serving expression of environmentalism imaginable.

Surely the events that led to the EPA crew’s accident should be investigated and all efforts to prevent further incidents should be taken. But Fox News obviously doesn’t care about that. They only care about slandering a government entity that was trying to improve an already harmful situation. As opposed to the energy companies whose accidents occur while they are trying to line their pockets.

And it should not be forgotten that many of those same polluting energy companies are advertisers on Fox News and other Fox media outlets. So as the corporations profit from their dirty enterprise, Fox News profits right along with them. Indeed, Fox has a financial incentive to bury bad news about their advertisers and to exaggerate accusations against their foes at the EPA.