The Kentucky County Clerk and anti-gay wannabe martyr, Kim Davis, is deservedly rotting in jail for violating a court order to issue marriage licenses to same-sex couples. Her incarceration came after a Supreme Court ruling that the right to marry is constitutionally protected for gays and a federal district court finding her in contempt of court for continuing to defy the law.

Conservative advocates of Christian sharia law rallied around Davis, arguing that her religious freedom was being violated. However, there is no protection under the law for religious extremists in government offices to impose their beliefs on the people they have sworn to serve. To the contrary, as the court said, they are required to obey the law regardless of their personal preferences. These simple concepts, however, were profoundly misunderstood by Fox News who posted an article on their Fox Nation website about a separate case of religious faith in the workplace. 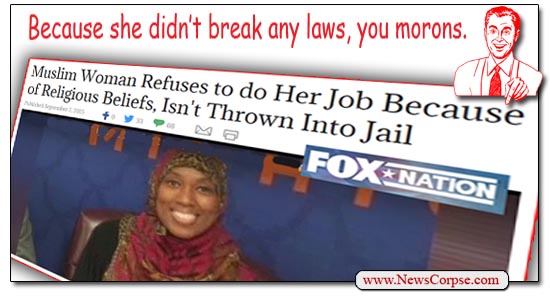 The circumstances of Charee Stanley’s dispute with her employer Express Jet are similar to those of Kim Davis only up to a point. Stanley took a job at Express Jet and a year or so later converted to Islam. She then told her employer that her faith forbids her from serving alcohol. It was that refusal to perform the duties required of her that led to her suspension. And this is where the two women’s cases diverge.

Davis is a public servant. She was elected to her position as County Clerk and swore to uphold the law, which includes all federal laws and the provisions of the Constitution. Upon failing to do that she was ordered by the court to comply, which she likewise refused. That refusal was unarguably in defiance of a valid court order, so she was found to be in contempt of court and taken into custody by the state marshal.

Stanley is a private citizen working for a private sector business. By asserting her religious beliefs as an excuse to decline her duties she was only violating the terms of her employment, not any law. Therefore, she could reasonably be punished by her employer, but the state has no jurisdiction to arrest or incarcerate her.

For the Fox Nationalists to suggest that there is some hypocrisy in jailing Davis but not Stanley is only evidence of the idiocy and utter absence of logic by those at Fox. There is no legal justification for jailing Stanley, but Davis is an unabashed outlaw. And in Fox’s world the innocent should be imprisoned and the guilty should go free.

[Update 9/8/2015:] The judge who jailed Davis has now ordered her released because the plaintiffs in the case have received their marriage licenses from deputies in the County Clerk’s office. The release is contingent on her not interfering with her deputies who will continue to issue licenses to all legal applicants.

Now what will the grandstanding pols (Mike Huckabee, Ted Cruz, etc.) who were planning on attending a protest and visiting the now-former prisoner do when they get to the Kentucky jail and Davis isn’t there? Not to worry. They are so full of bs-infused hot air that they won’t have any trouble finding something to bitch mindlessly about.

37 thoughts on “Fox Nation vs. Reality: The Dumbest Kim Davis Comparison Yet”