Stupidity is not a new development in politics. In fact, according to Napoleon, it isn’t even a handicap. So the campaign of Donald Trump isn’t breaking new ground just by demonstrating how idiotic a certain segment of the electorate is. He is following in the tradition of dimwitted pols like Michelle Bachmann, and fact-challenged pundits like Glenn Beck, who appeal to Tea Party malcontents and paranoid bigots. And his entry into the political circus was eerily prophesied by none other than Ralph Wiggum of The Simpsons who, when told by Lisa Simpson that he was being used by self-serving party operatives, said that…

“Maybe I want to use them. Use them to make this country great again. When we’re mad, we’ll just use our words, then the rest of the world will play nice with us. And the only boom-booms will be in our pants.” 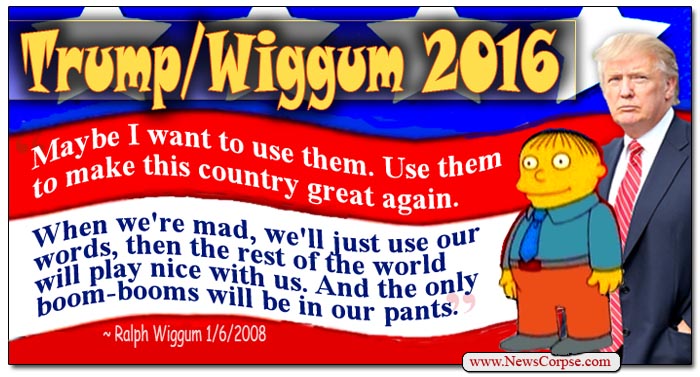 From the mouths of babes, whether it be The Ralph or The Donald. Little Ralphie’s brief foray into politics for “E Pluribus Wiggum“ (Season 19, episode 10, 1/6/2008) appears to be the inspiration for Trump’s campaign theme. Not only does he want to make America great again, but he offers nothing of substance, just empty words from an equally empty mind that regards being mad as a path to solving problems. Boom boom bing bing bing. But at least Ralph doesn’t descend into the hostility that characterizes Trump’s brand of hate-spewing. That’s another old wrinkle that Trump is pursuing on his own. Other than that his campaign is notable only for his third-grade language skills and the way he has fooled the media into covering his every hiccup as if it were newsworthy.

But we’ve seen this sort of tabloid megalomania before and never ends well. It is rooted in division and relies on the abundance of intellectually lazy supporters who embrace faulty information and even disinformation (i.e. Fox News). They are a sorry lot who were fittingly described by Sean Illing of Salon as “the infantilized conservative base.” Illing noted that…

“Trump has continued to repackage shopworn stupidities and beam them back at his audiences, and conservatives can’t get enough of it. […and that…] Trump’s success shows how easy it is to openly infantilize the conservative base. You don’t need ideas to win over Republicans anymore; you simply have to reflect their paranoia and frustration, with as much bombast and superficiality as possible.”

As evidence of that theory, Trump made another one of his patented screwball challenges. Upset that CNN might benefit from the free-market capitalism that right-wingers like Trump pretend to be so fond of, he wrote a letter to CNN president Jeff Zucker to complain about how much money the network might make on the upcoming Republican debate. Sources have reported that CNN will be charging up to $200,000 for a 30-second ad that normally would sell for $5,000. From the letter…

Trump: While I refuse to brag, and as you know very well, this tremendous increase in viewer interest and advertising is 100% due to “Donald J. Trump.”

If I didn’t know better I would think that this letter was written by Stephen Colbert’s staff. Note how he leads with his refusal to brag, followed immediately by his bragging about providing 100% of the viewer interest. He may be right to the extent that the guy standing on the building ledge is also due credit for whatever ratings the news gets that night. And I wonder why Trump put his own name in quotes. Trump then challenged CNN to donate the program’s revenue to some unnamed veterans charity.

For the record, CNN can sell about fifteen minutes of ad time during the debate, which comes to a total revenue of about $6 million. The network pulls in about $1.27 billion dollars a year, so this isn’t exactly a windfall. And if multi-billionaire Trump is so concerned about the welfare of veterans, why doesn’t he just make a donation himself? Perhaps because he is famously known for being “The Least Charitable Billionaire“ in the world.

This is reminiscent of Trump’s birther challenge to President Obama to release his college transcripts and passport data in exchange for Trump donating $5 million to charity. Once again, why does Trump tie his philanthropy to whatever he can get from other people for himself? Clearly he isn’t driven by an interest in helping others. He made a similar challenge to Obama to release his birth certificate in exchange for Trump releasing his tax returns. Well, Obama did release his birth certificate, but Trump reneged on his part of the bargain.

What all of these behaviors on Trump’s part share in common is an obvious and pathetic childishness. Particularly the traits where a child believes that the world revolves around him or her self, and clings stubbornly to positions despite the absence of any logic or reason. He seems to be either stunted in emotional development or entering a stage of senility. This may explain to some degree his popularity among the infantilized set of GOP dimwits who display the same character flaws. And it clearly makes the comparison to little Ralph Wiggum all the more apt. And while we’re at it, the Simpsons provided another example of behavior that neatly fits Donald Trump. This video could have been taken of Trump as a child or even last Thursday:

4 thoughts on “Remedial Republicans: Or How Ralph Wiggum Foretold The Coming Of Donald Trump”