The Doctrine of the Broken Clock has come into play with some recent remarks by Republican front-runner Donald Trump. That is, despite distinguishing himself as being wrong about pretty much everything, he said something that happens to be worth consideration without even knowing it. 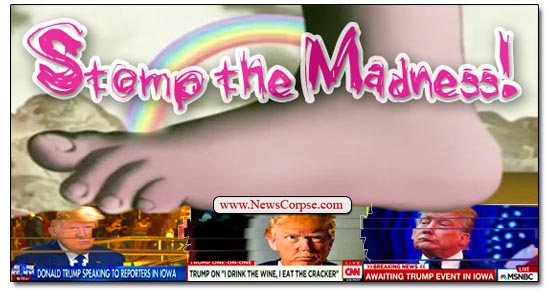 “Every time I go on television it’s gotta be live. It’s live. I said ‘Oh, can I have a rest please?’ Tonight it is live on Fox. Who likes Fox? I like Fox. It’s live on CNN. Who likes CNN? And it’s live on MSNBC, right? How come it always has to be live? Why don’t they just cover me like anybody else where they go the next day and they show little clips? Every time I speak it has to be live. It’s ridiculous, but it’s OK. Right? We have to suffer with it.”

Exactly! What is wrong with the media? Even after Trump taunts them about how tightly they are wound around his fat finger, they still bow down to him. Even after he correctly notes that it’s ridiculous, they persist in following him around like lovesick puppies. Even though there is nothing in Trump’s stump speeches that makes them newsworthy, other than some fresh bit of noxious racism or ignorance, his arrogant mugging is carried live. His circus sideshow offers no justification for preempting regular programming to broadcast his ego-ranting as if the fate of the nation depended on it, but they do it anyway. Why?

There is no precedent for how the media is covering this carnival barker. No other candidate gets this much attention. Could it have something to with Trump’s reality show persona, his penchant for dumbfounding soundbites, and the media hunger for ratings? Obviously it does. But none of that falls within even the broadest definition of news, and the media is whoring itself in a quest for ratings and the advertising dollars they bring.

Even Bernie Sanders, who is outperforming Trump by every metric, isn’t treated this way. That’s right, Sanders is beating Trump in head-to-head polling. He is drawing bigger crowds. He has better (i.e. positive) favorability ratings. And while Trump’s popularity is a media-hyped myth created by the quantity of GOP candidates, Sanders is popular with a broad cross-section of the American electorate. What’s more, when Sanders speaks he actually addresses real problems and offers real solutions, as opposed to Trump’s vapid cliches and narcissism. True, Sanders doesn’t have a hat with an asinine slogan on it that bitches about America not being great, but his hair is at least as notorious. Still, no live coverage for him because the press knows that he isn’t likely to start screaming the “N” word or slap an immigrant orphan across the face.

The media should cover Trump like any other candidate. No more, no less. By arbitrarily providing live broadcasts of only his campaign speeches they are violating their professional duties by serving as the PR team for one candidate. Trump’s public appearances are pep rallies for his own aggrandizement, not news events. Even his press conferences have no business getting live coverage. When has the media done that for any other candidate?

The live coverage needs to stop, or at least be reserved for only events that warrant it for their news value. Absent that, the networks should register as lobbyists for the candidate and be required to report their airtime as in-kind donations to the campaign. This used to be true mainly for Fox News, but now all the cable news networks are exhibiting the same lack of journalistic ethics to benefit a raging demagogue whose primary appeal is that he could spontaneously combust at any moment.

[Update] As evidence of the faulty priorities of the press, President Obama gave a speech today in New Orleans on the ten year anniversary of Hurricane Katrina that was properly carried live by all three cable news nets. Well, except for Fox News who cut away after less than two minutes. So for a presidential commemoration of an historic event that devastated a major U.S. city, cost the lives of more than 1,800 Americans, and displaced tens of thousands more, Fox News could only spare a little over a minute. But for Trump’s stump speech they stay live for an hour or more.

4 thoughts on “Donald Trump Is Right! The Media Is ‘Ridiculous’ For Covering Him Live”