In the midst of an uncommonly busy news day that included the Pope speaking at the United Nations and President Obama welcoming Chinese President Xi to the White House, GOP House Speaker John Boehner chose to announce that he is resigning as Speaker and leaving Congress effective October 31, 2015 (Halloween?). 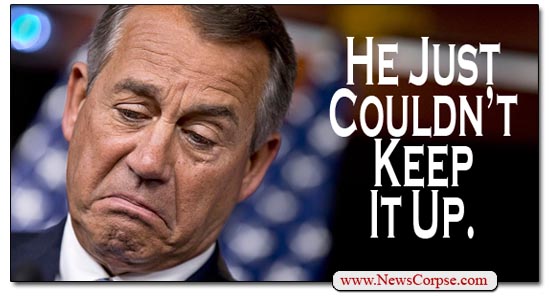 Boehner held a press conference to address his reasons for this surprise resignation, but avoided saying outright why the decision came so suddenly. He alluded to the truth when he mentioned that he didn’t want to put Congress through some unspecified turmoil. What he was covertly referencing was the opposition to his leadership by his GOP peers and the prospect of a motion to vacate the post, in effect a vote of no confidence that could have led to a new Speaker’s election. Rather than face that humiliation, Boehner chose to bug out.

That wimpiness is emblematic of Boehner’s legacy as Speaker. Ever since his ascendancy to the post he has wobbled in fear of the Tea Party caucus that demanded a radical and uncompromising agenda. Boehner has presided over an embarrassing reign of failure and capitulation. The tiny Tea Party cell of extremists in the House has utterly dominated him and reduced him to a dysfunctional figurehead who cannot complete even the simplest tasks of governing. He even set failure as a standard when he said that Congress “should not be judged on how many new laws we create. We ought to be judged on how many laws we repeal.” [Note: Number of laws Congress repealed while Boehner was Speaker: Zero] As a result, Boehner’s tenure is notable for being the most ineffectual Congress in history. It has managed to produce fewer bills, and work fewer days, than any Congress in modern times.

While achieving that dubious honor, they also held more than fifty votes attempting (unsuccessfully) to repeal or otherwise cripple the Affordable Care Act (aka ObamaCare); filed a futile lawsuit against Obama over immigration; orchestrated a costly and unnecessary shutdown of the government; and formed the Special Committee on Politicizing Benghazi. All the while missing real opportunities by declining to hold votes for bills that would have passed merely because they didn’t have a majority of Republicans. What Boehner seemed to fail to grasp is that he was the Speaker of the whole House, not just the Republican caucus – and certainly not the Tea Party.

His departure will create a vacuum at the top that will not be filled without a bloody battle for control. Boehner’s chief lieutenant, and staunch ally, Kevin McCarthy, will not be welcomed by the GOP’s Wingnut Caucus. There will almost certainly be one or more conservatives entering the contest to be his successor. Maybe even Louie Gohmert (if we’re lucky) who got three whole votes when he ran against Boehner earlier this year (despite having endorsements from Sean Hannity and Sarah Palin). Consequently, Boehner’s alleged hopes of preventing the House from undergoing turmoil is going to have the opposite effect. It is just Boehner who will avoid the turmoil.

It is clear that Boehner’s rush to the exits is due to more than just a desire to spend more time with his family. You don’t ditch a job that puts you second in line for the presidency of the United States without serious concerns. Especially during an election year that is so consequential to his party. However, this opening may present an opportunity for Boehner’s last Republican primary opponent in his Ohio district to run again for the seat. J.D. Winteregg may not have had a realistic chance of unseating Boehner back then, but he did have one of the best campaign videos ever.

8 thoughts on “If You Have A Boehner Lasting Longer Than 23 Years, Seek Immediate Medical Attention”