The Republican Party is showing signs of desperation after virtually every attempt to manufacture scandals that they can blame on Democrats has failed. Rather than developing some policy initiatives that might find favor with the American people, or conducting outreach to voter groups, the GOP is diving deeper into unfounded allegations and conspiracy theories. Just yesterday three of their top players engaged in some Olympian nuttiness that produced nothing but embarrassment for their floundering team. 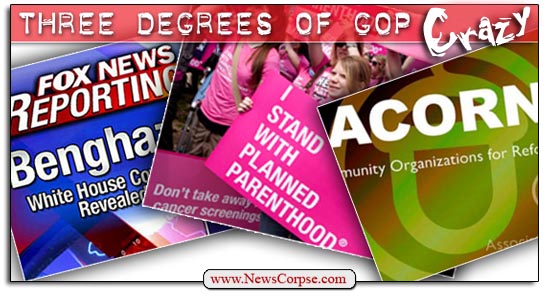 Let’s begin this three degrees of separation journey with an appearance on Sean Hannity’s Fox News program (video below) by the man projected to be the next GOP Speaker of the House of Representatives. Kevin McCarthy may have thought that he would have a genteel Tea Party with the GOP-friendly host, but he wasn’t prepared for the level of animosity that wingnuts like Hannity have for establishment conservatives. Hannity took McCarthy to task for not having done more to monkey wrench the Obama administration’s agenda. He assailed McCarthy and the House GOP for presiding over budget deficits, funding ObamaCare, amnesty for immigrants, and not shutting down the government over Planned Parenthood. Having been caught off guard, McCarthy carelessly revealed the real, not-so-secret purpose of the House Select Committee to Politicize Benghazi as he tried to defend his record.

“Everybody thought that Hillary Clinton was unbeatable, right? But we put together a Benghazi special committee, a select committee. What are her numbers today? Her numbers are dropping. Why? Because she’s untrustable. But no one would have known any of that happened had we not fought to make that happen.”

So McCarthy admitted on TV that the true aim of the Benghazi hearings was to damage Clinton’s reputation and electability. To which Hannity graciously replied “I agree, that’s something good. I give you credit for that.” McCarthy later let slip that he intends to form another pointless select committee on Planned Parenthood. Under Republican control, this congress has held an unprecedented number of flagrantly partisan hearings that have produced nothing of value to their party, much less the nation. The Benghazi investigation has now officially lasted longer than any previous congressional investigation, including the JFK assassination, the Nixon Watergate affair, and 9/11, yet has not found a single bit of evidence of any wrongdoing.

The Benghazi Committee is chaired by Rep. Trey Gowdy (SC-Tea Party), which brings us to the second degree of separation. Gowdy is also a member of the committee investigating Planned Parenthood for misconduct alleged by an anti-abortion group’s videos that have been proven to be edited in a deliberately deceptive fashion. When it was Gowdy’s turn to question Planned Parenthood president Cecile Richards he asked whether she had an understanding of those who oppose abortion. Richards said that she appreciates that “people have a lot of different views on the issue of abortion,” then dismissed the condescending premise saying that Planned Parenthood “trusts women” to make decisions about their own bodies.

That provoked Gowdy to accuse Richards of wanting to “frame the issue” to say that she is “the reasonable one, and those of us who have a contrary position are not reasonable.” Which, of course, she did not say. Gowdy actually conceded that she didn’t say that, but then, using his supernatural power to read minds, told her that “It’s not always what you say, sometimes it’s just what you mean.” But he still could not explain how anything she said could be interpreted to mean what he asserted. It’s plain that he was intent on mischaracterizing her remarks no matter what she actually said.

The chairman of the Planned Parenthood committee was Rep. Jason Chaffetz, which conveniently moves us to the third and final degree of separation. During the same hearing, Chaffetz made some glaring blunders. For instance, he displayed a highly distorted and prejudicial chart that Richards had to tell him was provided by Americans United for Life, a virulently anti-abortion group. But his worst gaffe may have been uttered after the hearing when he went on Fox News to spin the event for the media. In an effort to drive home his slanderous perception of events, he said that “Planned Parenthood is the new ACORN. That’s who they are. Remember when we talked about ACORN? That is Planned Parenthood as far as I can see it.”

You know, he’s actually right. ACORN was an organization that helped people, but was smeared by liars who produced false videos that eventually led to Congress defunding them. Sound familiar? There was never any evidence that ACORN did anything wrong. To the contrary, James O’Keefe, the producer of the videos, lost a lawsuit and was ordered to pay a former ACORN staffer $100,000. But, unfortunately, that was after ACORN lost their funding and had to close up shop. Now the same sort of liars are trying to do the same thing to Planned Parenthood despite several state investigations that have already cleared them of any wrongdoing.

What all of this adds up to is the brazen dishonesty of a desperate Republican Party trying to invent scandals and exploit their congressional power to bring down their political foes. With McCarthy we have an admission that their efforts are partisan. With Gowdy we see how blinded they are by their own biases. And with Chaffetz a clear connection is made to a previous effort to sabotage an honorable public service organization.

Ironically, the GOP is whining about taxpayers having to pay for Planned Parenthood and women’s health care services, but most Americans support Planned Parenthood. So the real question is why are Americans forced to pay millions of dollars for congressional hearings that are nothing more than partisan witch hunts based on proven lies?

Here is the video of McCarthy on Hannity:

13 thoughts on “Three Degrees Of GOP Crazy: From Benghazi To Planned Parenthood To ACORN”