Anyone who is surprised by the clumsy efforts of Republicans to try to manage their circus of a primary hasn’t been watching what they have been doing in Congress for the past several years. Their legislative record is by far the least productive in modern times with both the fewest bills passed and the fewest hours in session. They have developed a reputation as ineffective, incompetent, and obstructionist, even failing to pass their own bills. 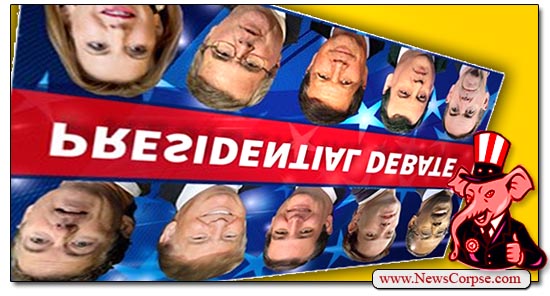 The recent calamity surrounding their election of a new Speaker, following the wingnut driven exile of John Boehner, didn’t do much to enhance their reputation. They eventually settled for Paul Ryan, who doesn’t want the job and is despised and distrusted by their right wing “Freedom” caucus. What the Tea Party has wrought for the GOP is The Congress That Can’t Govern Straight. And not surprisingly, the resounding chaos and absence of leadership that is emblematic of the GOP’s congressional majority is precisely what is being seen in their response to what they regard as a poor debate performance.

Following the debacle at CNBC, the candidates attempted to band together to insist that reforms be made in order to avoid the messy affair that took place last week. They resolved to produce a Memorandum of Understanding (MOU) that would include a list of demands to present to the media organizations that produce and broadcast the debates. But as soon as it began the edges started to fray leading to a complete collapse. Within days the congregation of candidates fell apart. Donald Trump, Ben Carson, and John Kasich have said that they will not sign on to the draft MOU. Carly Fiorina didn’t even send a representative to the meeting. Chris Christie called out his rivals for complaining and boasted that all he needs is a stage and a podium (a line that Trump later stole, after he had already done his share of whining). Consequently, the group’s MOU appear’s to be a non-starter.

The whole process, however, was a catastrophe resulting in a set of criteria that was in no way different than what was already being done. In other words, it was a lot of frantic bluster that changed nothing. If you compare their demands to the debate agreement drawn up between the campaigns of Barack Obama and Mitt Romney in 2012, you are not going to find much difference. What’s more, nothing in the MOU would have prevented any of the things that occurred during the CNBC debate to which they so fiercely objected. So what’s the point?

Some of the candidates had suggestions for reform that never made it into the MOU. Ted Cruz expressed his desire to see the debate moderators limited to registered Republicans like Glenn Beck, Rush Limbaugh, Sean Hannity, and Mark Levin. Because these respected journalists would bring a air of dignity and rationality to the debate. Ben Carson floated the idea of not broadcasting the debates on TV. He also lobbied for a two hour time limit with all 15 candidates in the same debate. Each would get a five minute opening and closing statement. Of course that would take two and a half hours.

Clearly these people cannot be taken seriously. It is unlikely that they even intended to pursue these debate negotiations. All they really wanted was an opportunity to bitch about the media, an easy target and a reliable applause line. But it wasn’t the media in general, just a specific subset that irks them. That would include anything in the NBC family and any network with a foreign sounding names (i.e. Telemundo). To be fair, Jeb Bush asked that Telemundo’s debate be reinstated, but Trump quickly slapped that down saying that if it was he would walk. There was one network though that got a free pass. All the parties agreed that the debate demands would not apply to Fox News because “people are afraid to make Roger [Ailes] mad.”

If there is one thing that is obvious about this charade, it’s that it couldn’t possibly succeed. Republicans aren’t really looking for fairness or balance in their debates. They want to turn the debate into an infomercial for the GOP. The networks could never agree to that. And with all of the infighting and conflicting priorities among the candidates it was destined to disintegrate. And like everything they have tried to do Washington, Republicans have proven once again to be bumbling fools.