The resident Republican blowhard on MSNBC, Joe Scarborough, has staked out his post as the network’s voice of rightist disinformation. He commands his three hour block of airtime like a junta leader, ordering the topics of discussion and interrupting his guests incessantly. 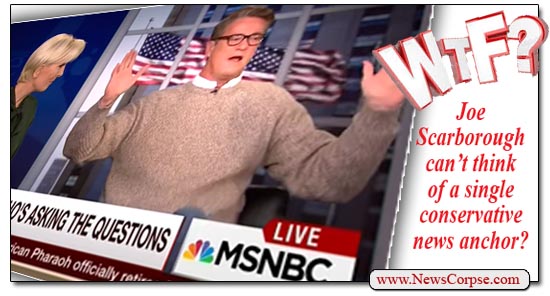 This morning Scarborough appeared to have a severe cognitive collapse during a segment about the Republican Party’s debate-o-phobia (video below). Like most of his ideological allies, he is suffering from the delusion that the American media, owned by a handful of megalithic, multinational corporations, is dominated by liberals. Scarborough set off on a rant about the absence of conservatives on nightly news programs, Sunday shows, and in the executive suites. He badgered his guests to come up with examples of Republicans in those roles, and insisted that they could not do it.

Scarborough: Outside of Brit Hume, who has been a conservative in the mainstream media in the past 30 years who you’ve worked for? Outside of Brit Hume, who has held a powerful position at ABC, NBC or CBS News on the air? […] Name the single Republican that has hosted a Sunday show, that has been an anchor of a news network for the big three networks over the past 50 years. You cannot do it.

Setting aside the fact that Scarborough conveniently leaves out Fox News, the most watched, and therefore mainstream by default, cable news network, he repeatedly spits out this challenge to his colleagues, who are not particularly well informed on the subject. For instance, Mark Halperin, the senior political analyst for MSNBC, responded sheepishly saying “Joe, I agree with you 100%.” No one else on the panel was able to take up Scarborough’s challenge either.

For their future reference, they may want to note that Chris Wallace, now the anchor of Fox News Sunday, hosted NBC’s Meet the Press for a year. Tony Snow, who went on to serve as press secretary for George W. Bush was the first host of FOX News Sunday. Diane Sawyer anchored ABC’s World News Tonight for five years after serving as a press aide to Richard Nixon. So Scarborough’s sweaty insistence that no one can name such people is demonstrably false.

Scarborough kept switching from asking for on-air-personalities to executives in charge of the news operations. On that front there are right-wingers like David Rhodes, the current President of CBS News who had a similar position at Fox for fifteen years. Ken Jautz, the head of CNN, is the man who gave Glenn Beck his first job on television. NBC is now owned by Comcast, whose Roberts family owners are notorious righties.

There are certainly more conservatives in television newsrooms, but it’s hard to pin them down with proof. That’s because most career journalists are careful to avoid any open expression of partisanship. So people like CBS’s Scott Pelley, or NBC’s Chuck Todd, and many more, may have distinctly conservative views, but they have never worked for a GOP senator or made a donation to any political campaign, or even registered with a party, so there is no hard evidence. And the same is true for journalists who are accused of being liberals. That doesn’t mean they aren’t there. And it doesn’t warrant the loony outburst that Scarborough let loose today. If anything, the fact that no one at the table could cite any of the people mentioned above is proof that the media is conservative, and blind to their bias.