The rancorous aftermath of the Republican debate a couple of weeks ago on CNBC laid the foundation for a comparison to what Fox News would do when they hosted their second GOP debate on their sister network, Fox Business. The hype prior to the FBN affair was all about how they would show the rest of the press how a debate should be run. 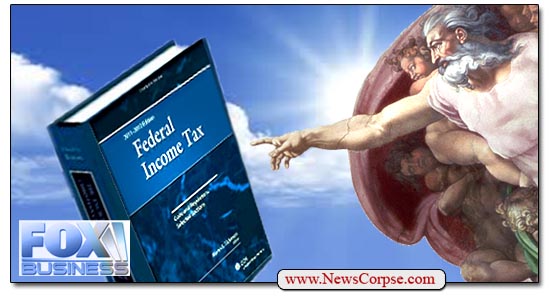 Well now we know. Rather than questions about whether Donald Trump is a cartoon candidate (which deserves further scrutiny), Fox’s Neil Cavuto, the Glenn Beck of business news, sought to ascertain the candidates’ positions on tax policy. And opening that segment of the program, Cavuto turned to Ben Carson and asked…

“I think God is a pretty fair guy. So tithing is a pretty fair process. But Donald Trump says that is not fair, that wealthier taxpayers should pay a higher rate because it’s a fair thing to do. So whose plan would God endorse then doctor?”

Seriously? That was the first question asked on the subject of taxes. And it was rather contentious framing that pitted Carson against Trump, something Republicans railed against after the CNBC debate. And yet, following this debate Fox will undoubtedly spend untold hours exalting themselves as superior debate hosts and praising how they put on a more serious, less combative candidate forum.

It may indeed have been a program more closely in tune with their audience who likely support the notion of a faith-based tax policy. Perhaps the next Republican debate can be an American Idol spin-off called “God’s Favorite,” where candidates compete to see who gets voted out of Heaven.

Anyone who has researched the tax plans of the GOP field, however, will not be surprised by the reliance on faith. They all create varying degrees of additional debt with Trump’s topping out at more than $10 trillion over ten years. The Rev. Ted Cruz continued sermonizing with a comparison of the IRS tax code to the bible. You’ll never guess which one he preferred. But the sin of lying was given short shrift. PolitiFact examined recent representations by some of the candidates and rated them all less than truthful.

So did Fox achieve their goal in presenting a less antagonistic debate that focused on the issues and served the interests of voters? Well not if disseminating real information is the standard of judgment. At no time during the debate was it brought up that these candidates were pitching tax plans that exploded the debt. That seems like something that voters would want to know.

In the end, though, if the voters were not served, the candidates were. They got pretty much exactly what they wanted: A forum to articulate their views without any serious challenge. The debate was more of an extended infomercial for the candidates who were permitted to spin, lie, and even promote their websites in a brazen appeal for cash. Which actually is kind of a perfect synergy for a GOP (Greedy One Percent) debate on Fox’s money-media network.

8 thoughts on “GOP Debate On Fox Business Wants To Know: Whose Plan Would God Endorse?”