Always anxious to reflect the spirit of America on its revered holidays, a Fox News anchor took the time to produce a commentary that expresses his views on immigration. And what better occasion than Thanksgiving to contemplate the sacrifices of people from far off lands enduring long and perilous travels in the hopes of a better life in a new world?

In that spirit Todd Starnes, Fox’s Christian Taliban representative, sought to demonize immigrants as less than human with an obscure reference to a classic TV program. Starnes opened his commentary saying…

“Most Americans agree with Donald Trump — the illegal aliens have to go. Head ’em up, move ’em out.” 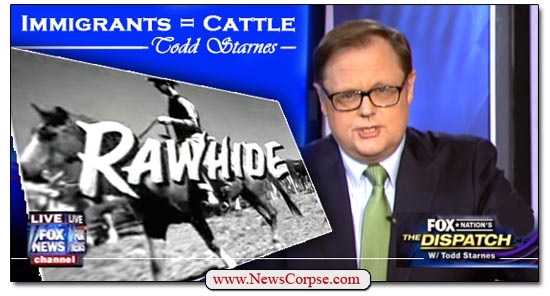 Fans of the old western show “Rawhide” will remember its theme song by Frankie Laine (video below) that went: “Move ’em on, head ’em up/Head ’em up, move ’em out/Move ’em on/head ’em out Rawhide!” It was a cowboy ode to wrangling livestock, often on long, arduous cattle drives. did he think that no one would notice the sly way he equated immigrants with cattle?

Apparently Starnes regards that as an appropriate way to address the issue of immigration, and particularly the plan by Donald Trump to round up some 11,000,000 undocumented residents and “herd ’em out” of the country. Starnes’ choice of that phrase proves that he regards immigrants as animals. But it is also typical of the racist rhetoric so prevalent on Fox News and among Republican bigots. In this context the lyric perfectly expresses the hatefulness of people who don’t see the irony of their own past as immigrants, especially in the part of the verse that says em>”Don’t try to understand ’em/Just rope and throw and grab ’em.”

Starnes continues his rant by citing the results of a Fox News poll that found that a slight majority of 52% of respondents favor deporting immigrants who are living in the United States illegally. He then characterizes that as proof that “Americans agree with Trump – Illegals Must go.” But in his own commentary he reveals that it isn’t Americans so much as it is Republicans. The breakdown of the poll shows that 70% of Republicans hold that view, but a majority (58%) of Democrats oppose the inhumane act of mass deportation.

Starnes also misrepresented another question in the poll that asked “Which of the following best describes how you feel about identifying and deporting millions of immigrants who are living in the U.S. illegally?” The responses were that 41% considered it “a smart idea,” which Starnes included in his commentary. However, for some reason, he left out that 54% considered it “Silly because it would be impossible [or] Wrong even if it were possible.”

Taking the numbers in their totality, it is ridiculous to conclude that Americans agree with Trump on immigration. Only someone intent on deception would make such a case. But Starnes wasn’t finished with his offensive diatribe. He went on to enumerate a series of known falsehoods about immigrants:

“Americans are frustrated — they see illegals taking away our jobs. They see our tax money funding sanctuary cities and funding social programs that a good many legal citizens don’t have access to. They see a government that turns a blind eye to the illegals as they murder American citizens and pillage and plunder local economies. They see a White House that favors the illegals over immigrants who are trying to enter the United States legally.”

There are so many outright lies in that paragraph it’s hard to know where to begin. But let’s start with the observation that Starnes, a self-appointed martinet of allegedly Christian values, repeatedly uses the racist slur “illegals” to refer to undocumented residents.

As for the immigration myths he is perpetuating, the facts are not with him. No one is stealing “their” jobs. The jobs are being offered to immigrants by American employers, yet nobody talks about punishing them for violating the law, and no one calls them “illegals.” What’s more, immigrants are actually responsible for expanding the job market and growing the economy. And they do this without tax money or burdening the welfare system because they are not entitled to most benefits.

The contention that immigrants are “pillaging and plundering” is both repugnant and entirely without basis. In fact, the undocumented immigrant population in the U.S. has a lower rate of criminal activity than native-born citizens. And Starnes’ assertions that the government is “turning a blind eye” to murders, and that the White House favors “the illegals” over other immigrants is downright delusional. He doesn’t bother to cite any examples because there weren’t any up his ass with the rest of what he pulled out for this commentary.

So what we have here is a Fox News anchor fabricating blatant lies in order to foment hatred toward a vulnerable population. He couches the whole tirade in a racist theme that casts his targets as sub-human cattle. And he chooses Thanksgiving Day, a day meant to celebrate brotherhood and the welcoming of strangers, to insult and smear people who want nothing more than to provide for their families and enjoy the blessings of liberty. Nice work Your Assholiness.

7 thoughts on “Thanksgiving Day On Fox News: Anchor Refers To Immigrants As Cattle”