Yesterday President Obama and French President Francois Hollande held a joint news conference at the White House to address the aftermath of the terrorist attacks in Paris. They presented a united front against terrorism and each delivered opening statements that virtually mirrored one another. The gist was that, as Obama said…

“This barbaric terrorist group — ISIL, or Daesh — and its murderous ideology pose a serious threat to all of us. It cannot be tolerated. It must be destroyed.”

It was a forthright statement of unequivocal determination to prevail over evil and nothing Hollande said surpassed it in tone or substance. Nevertheless, Obama’s critics in the American media snarled predictably about what they viewed as the weakness of his remarks, as compared to Hollande, without citing a single instance of how they differed. For example, Rupert Murdoch’s New York Post (and Fox Nation website) disparaged Obama in a headline article as being “dangerously nonchalant about ISIS threats.”

However, where they went cascading overboard was with their wildly absurd misinterpretation of comments both leaders made about the upcoming United Nations Climate Conference in Paris. For the record, here are the excerpts from each opening statement that addresses the conference:

Obama: Next week, I will be joining President Hollande and world leaders in Paris for the global climate conference. What a powerful rebuke to the terrorists it will be when the world stands as one and shows that we will not be deterred from building a better future for our children.

Hollande: There is no greater symbol than holding this conference on climate in Paris with some 150 heads of state and government. Never before did France host so many leaders of the international community. They’re coming to sort out the climate challenge, and again, to work and to find the right agreement so that we can limit greenhouse gases emissions and make sure that our children and our grandchildren live better, or simply can live.

What is plainly obvious is that both men were declaring their resolve to forge ahead with the conference despite the attempt by terrorists to stir panic and to disrupt the lives of free people in Paris and everywhere else. It was a proclamation of their commitment to proceed with life’s affairs without being hobbled by fear. But the Fox News crowd is either to stupid to recognize that, or they are deliberately twisting it to arrive at a ludicrous conclusion that fits their anti-Obama narrative. Here is a sampling of their mindless exercises in disinformation: 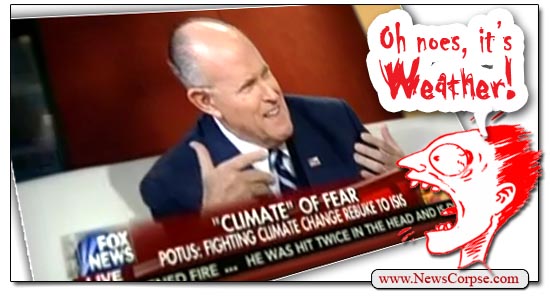 These maroons actually believe that Obama was arguing that Climate Change reform was his response to terrorism. They are so intellectually feeble that they could not grasp that he was talking about proceeding with the conference, rather than canceling or rescheduling it, as the “rebuke” in that it demonstrated that the terrorists could not upset our lives with their barbarous tactics. We will persevere no matter what they do, they cannot force us to retreat into bunkers. It is a message of strength. And even though the Fox dimwits directed their insults at our president, while praising Hollande, they completely ignored the fact that Hollande said exactly the same thing.

This is what happens when people allow themselves to become so consumed with hate that they can’t hold a coherent thought in their diseased brains. It exposes them as frauds who have only their own narrow interests at what remains of their heart. But most of all it signals an innate idiocy and inability to engage in critical thinking. Which may be a good thing for Fox News pundits. Because their audience is even less able to understand simple concepts or process information in any logical manner. Fox knows who they’re playing to, and their audience appreciates being talked down to – and even lied to.

38 thoughts on “Are The Obama Haters At Fox News TRYING To Look Stupid?”